This month, we have seen the courageous people of the Arab world rising up and fighting for a democratic system of government. Also in Iran we continue to see rising struggles, especially in the form of strikes. They come at a time of severe cuts to subsidies to food and fuel, and are sure to continue as the pinch is felt more severely. 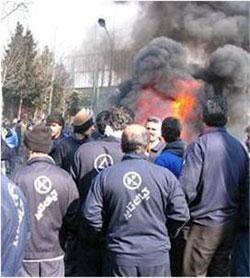 In early January, 3500 workers went on strike at the Barez tyre factory in Kerman province. Their demands were for permanent contracts instead of the current month-by-month ones; for their full 70 hour overtime compensation rather than the current 40 hour one recognised by the management; for two days off per week rather than the current one day per two weeks; and for the increase in production bonuses, which have been reduced since October. The same workers also went on a four day strike in September, which was ended after assurances from the Kerman Labour Office. But citing the incoming subsidies, the management refused to satisfy the workers’ demands, resulting in the renewed industrial action in January.

January has also seen the workers at the Alborz tyre factory, in Eslamshahr, go on strike after they only received 50% of their back pay, which still includes four months’ worth of salaries and a New Year bonus from last year. Similarly to the Barez workers, the 1500 employees at the Alborz factory went on strike just recently, in October.

The strikes come at a time of economic turmoil, when thousands of industrial workers have been made redundant from recent closures. In recent weeks, Shahriar Iran Mayeh, Kohgilouyeh Motor Cycle, Khoramdareh Iron Works and China, and Ilam Zarinbaft have all seen closures to factories. With such a lack of job security, it is no wonder why the workers at the Barez tyre factory have called for permanent contracts.

This trend might continue as the subsidies for 16 basic goods and services, including fuel, electricity, water, wheat, bread, rice, milk and sugar, are gradually being phased out over a five year period. Already, petrol has risen from 40 US cents per litre to 70 cents, and diesel has risen from 1.6 cents per litre to 35; wheat flour could previously be bought for well under 1 cent per kilo, but now sells at 28 or 30 cents; the price of water has risen from an average of under 1 cent per cubic metre to between 25 and 37 cents.

Moreover, the government has anticipated the reaction we have seen to the policy, which it sees as a threat. This has been evident since even before the cuts were made, such as when a communiqué was issued by the Supreme National Security Council on 5 October, sent to all newspapers and news agencies, warning against any coverage of labour activity. This was accompanied by the detention of several trade unionists and warnings sent to others against union organising activities. Additionally, once the plans had been put into effect in late December, the police presence on the streets was heavily increased.

Although the strikes have not been focused on the cuts to subsidies, the strike movement in Iran is in its infancy, and it remains to be seen if and how it will be shaped by the government’s recent policy. As yet, there has been little industrial action in the country’s main industries, particularly oil, although there was a recent strike at the Abadan oil refinery. We should not rule out the possibility that industrial action will increase as the impact of the recent cuts is fully felt. Such economic contingencies can serve as a catalyst to the revolution, as was the case in the development of the 1905 Russian Revolution, when “individual coalescing wage struggles which, in the general temper of the revolutionary situation and under the influence of the social democratic agitation, rapidly became political demonstrations; the economic factor and the scattered condition of trade unionism were the starting point, all-embracing class and political action the result” (Rosa Luxemberg, The Mass Strike, 1906). We see a similar situation in Iran: trade unions are few and small, strikes are focused on local industrial issues, and yet there is unified discontent directed towards the government.

The mass strike will not arise out of different conditions to these. It is merely the ‘method of motion of the proletarian mass, the outward manifestation of the proletarian struggle in the revolution’ (Rosa Luxemberg, The Mass Strike, 1906). It is part of the same dialectical process as the individual strikes we see today. The strikes seen in January are therefore of great significance, as the revolutionary process in Iran proceeds forwards.