Share
Tweet
The protest of the students of the Tarbiyat-e Moalem [teacher training] University in Pardis Karaj, about 20km west of Tehran, has not only continued but grown in strength and resolve.

The protest of the students of the Tarbiyat-e Moalem [teacher training] University in Pardis Karaj, about 20km west of Tehran, has not only continued but grown in strength and resolve.

Almost 5000 female and male students gathered together at the campus and held an 'open tribune' - a platform where they held an open debate about their struggle and how to develop it, their demands and so on. 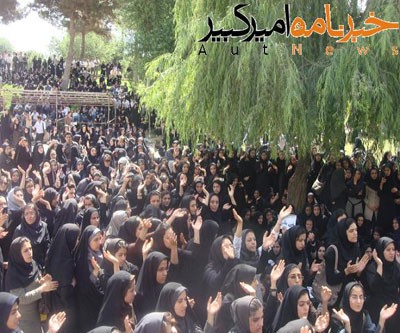 The number of students on hunger strike has reached 126 and yet the authorities are still ignoring this dispute and refusing to discuss the students' demands. The situation of the hunger strikers is deteriorating rapidly but they are determined to continue their protest. For example, a female student who has had bleeding in her stomach is still continuing with her hunger strike.

Last night a female student had a fit in her dormitory. When the university's security guards prevented her transfer to the university's infirmary the students broke the dormitory window to take her there. The forces of Ensar-e Hezbollah had also been preparing to attack the protesting students but their plan was thwarted.

The slogans of the students included: "Guns, tanks, security guards are useless now!", "We will die, we will stay, and as long as we're alive, we will stay!", and in an echo of the Haft Tapeh Sugar Cane workers, "Students are prepared to die but won't accept hardship!"

There are a large number of riot police and security forces amassed near the campus. They are making suspicious manoeuvres and the students have noticed a number of them trying to pass themselves off as the personnel of the Education Struggle organisation (which has a building inside the campus). Many students are afraid that the authorities are preparing an onslaught like the one in July 1999 at Tehran University, where many students died.

Mabshari, a mollah who works for the university, has issued a 'jihad' order. The university's security guards have been contacting the families of students, talking to them in an offensive and threatening way. As a result of this type of intimidation, the grandmother of one of the protesting students had a heart attack and died today!

The struggle and solidarity

This struggle began on the night of Thursday 29 May over basic demands. The students are protesting against the sub-standard self-service canteen, the cramped dormitories, continuous harassment by the authorities, and other issues relating to their economic situation.