Dramatic events are unfolding in Iran. Hundreds of thousands of people marched in silence through central Tehran on Monday to protest Iran’s disputed presidential election in an extraordinary show of defiance that appeared to be the largest anti-government demonstration in Iran since the 1979 revolution. Reuter says one demonstrator was shot dead. But nothing can stem the tide. The revolutionary situation is unfolding with lightening speed.

Dramatic events are unfolding in Iran. Hundreds of thousands of people marched in silence through central Tehran on Monday to protest Iran’s disputed presidential election in an extraordinary show of defiance that appeared to be the largest anti-government demonstration in Iran since the 1979 revolution. 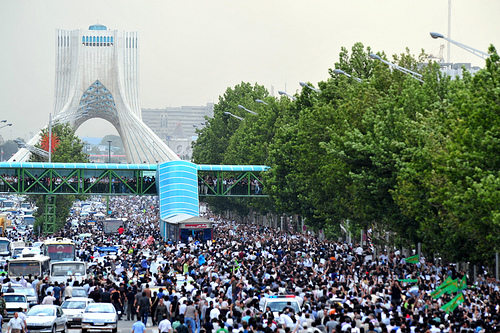 Supporters of Iran's defeated presidential candidate, Mir Hossein Mousavi, have poured onto the streets in Tehran and other cities to dispute the bitterly contested election campaign after the hard line president Mahmoud Ahmadinejad swept back to power.

The march began hours after Iran’s supreme leader, Ayatollah Ali Khamenei, called for a inquiry into opposition claims that the election was rigged in favor of President Mahmoud Ahmadinejad. The mass movement has shocked the leadership and aggravated the internal contradictions in the regime. State television reported that supreme leader Ayatollah Ali Khamenei, who has upheld the election result, urged the 12-member Guardian Council to "precisely consider" the complaints. This is a graphic indication of the crisis of the regime.

The ayatollah’s call — announced every 15 minutes on Iranian state radio throughout the day — was the first sign that Iran’s top leadership might be rethinking its position on the election. Mr. Khamenei announced Saturday that the election results showing a landslide victory for Mr. Ahmadinejad were fair, but on Sunday he met with Mir Hussein Moussavi, the former prime minister and moderate who was the main opposition candidate, to listen to his concerns.

A spokesman for the council, which must formally approve election results for the outcome to stand, said they would meet Mr Mousavi on Tuesday. They are expected to decide on the complaints by next week. But the revolutionary upsurge is gathering such momentum that even if they decide to annul the results and call new elections, it is not clear that this will be enough to halt the movement.

As evening fell, Iranian state television reported that shots had been fired at protesters, and The Associated Press reported that the gunfire had apparently come after a group of demonstrators with fuel canisters attempted to set fire to the compound of a volunteer militia linked to Iran’s powerful Revolutionary Guard. At least one person was reported to have been killed.

It was impossible to independently confirm these reports, which came after a day during which government security forces stood by at the edges of the avenues, allowing the demonstrators to stream past.

The silent march was a striking contrast with the chaos of the past few days, when riot police sprayed tear gas and wielded clubs to disperse scattered bands of angry and frightened young people. In Isfahan, south of the capital, more violence broke out on Monday, with police attacking a crowd of several thousand opposition protesters with sticks and tear gas, and rioters setting fires in parts of the city.

Beyond the capital, demonstrations have reportedly spread to at least seven provincial cities. The protests have marked the most serious display of discontent in the Islamic Republic in years. The breadth of the mass movement is unprecedented. It is a sudden upsurge of all the accumulated rage and frustration that has been accumulating for the past 30 years.

Iranian officials have reportedly blocked opponents of President Ahmadinejad from sending emails and accessing certain websites, but for now Twitter remains as a vehicle for protest. Protesters are seemingly using Twitter to voice their opposition to last week’s official election results, which gave victory to Ahmadinejad over challenger Mir Hossein Mousavi.

The regime is trying to use repression to halt the mass movement. Reuters reported: "Iran's hard-line Islamic Basij militiamen killed at least one person on Monday and wounded more when their building was attacked by demonstrators protesting an election they say was stolen by President Mahmoud Ahmadinejad."

Whenever the riot police charge, waving their batons, with their shields to the fore, people run down the streets to escape. Channel Four television commentator Linsay Hilsum in Teheran says: “The black-clad riot squad move in phalanxes on motor-bikes, riding up on the pavements, swiping at passers-by. You don’t have to be a protestor to get hit.”

She continues: “On Sunday morning, we ended up running with a crowd and hiding in a stairwell. A young man invited us upstairs to his office. Like many Iranians I’ve met in the last few days, he was fed up of the old order, and had voted for Mir Hossein Mousavi, the alternative candidate. But he wasn’t amongst the youths on the streets, throwing stones at the police, because he had no hope that it would bring change.

The reformist leaders, who up till recently were part of the Establishment, are undoubtedly terrified of the forces they have unleashed. Mousavi has been compelled to put himself at the head of the movement in an attempt to steer it into safe channels. But even he does not control events. Rather, events are controlling him.

On the streets there is a change of mood. There are reports of a growing confidence and militancy on the part of the protesters. Some reports say that demonstrators have attacked the offices of the hated Revolutionary Guard. This is an extraordinary and unprecedented development. It shows that once the people stand up and say “no”, no force on earth can stop them.

The movement is now spreading to the working class. There are reports that another mass rally, and a national strike are planned for tomorrow. The strike has been in the works since early yesterday, but now comes word of another major rally tomorrow. "According to the source, there will be a rally tomorrow for Mousvi tomorrow at 5 pm in Vali Asr Sq. and there will be a national strike by all of Mousavi's supporters."

The situation is changing, not by the day but by the hour. Like a heavy rock thrown into a still lake, Ahmadiejad’s coup has stirred up Iranian society to the depths. Nobody can say where events will end. But one thing is certain: Iran will never be the same again. The masses are starting to move, and the movement will not easily be halted. We are entitled to say wit confidence: the Iranian Revolution has begun!