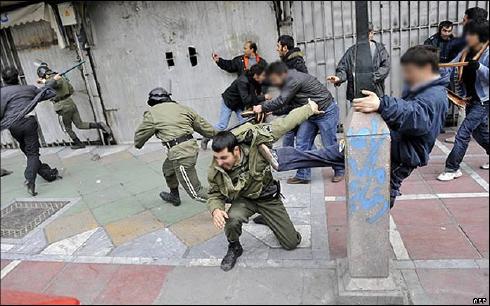 Over the last few days, mass demonstrations have erupted again in Iran. Millions are on the streets and there are reports of the people taking control of the streets, burning down police stations and even of police refusing to fire on demonstrators. These could be the last days of the hated IRI regime. If a revolutionary leadership were present, the hours of the Islamic Republic would be counted. We publish this article with lots of eyewitness reports from the ground. 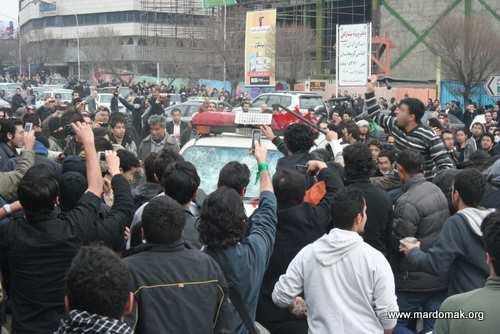 A year ago it would have been impossible to believe or even think about it, but as this article goes to print, the power of Islamic Regime is being eroded in Iran and the power is slipping to streets under the massive pressure of people. The equation is simple: millions of people are on streets and there is just not enough police and military forces to contain them.

December 26 and 27 this year was concurrent with the traditional Shiite days of mourning, Tasoa and Ashoora. Shiite Muslims traditionally mourn on these days to commemorate Imam Hossein, a grandson of Prophet Mohammad, who was killed on “Ashoora”. However, like any other religious tradition it has been generally treated like a street carnival by masses. This year, in the midst of a revolutionary movement that started six months ago and has shook Iranian society to its foundations, people had decided to use it as a day of protests. It was therefore for some time generally acknowledged that December 26 and 27 will be days of massive protest.

However, one could say what happened was more massive than most expectations.

While hundreds of thousands demonstrated in cities all over Iran on December 26, the real showdown came on Sunday, December 27. On this day, and as we are writing this article, millions of people filled streets in cities all over Iran and came into an open fight with forces of the regime. Not only that. Many streets, especially in central areas of Tehran, were actually occupied by people and are currently under their control. People have started taking over police and Basij stations, in different cities of Iran, setting fire to some and attempting to acquire guns from others.

Another very important development is some reports that show a number of forces have refused to shoot people, dismissing orders from their commanders. A report from Jaras (Green Way Movement network), one of the most credible news sources, said:

“Jaras correspondent reports that clashes all over Tehran are intensifying and police has lost control of many neighborhoods. Military commanders have asked their forces in central Tehran to use direct shooting to disperse demonstrators. But forces are refusing the command, causing disputes between forces and commanders.”

A Jaras correspondent present around Enqelab Square clashes says: “After this dispute, one of the guards said: ‘I will never kill the people of my own country’, he was then slapped by his commander who threatened him with martial court.” (Special Guard Forces Refuse to Shoot People). 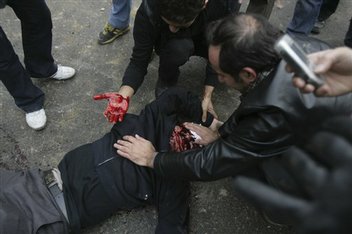 A demonstrator who was shot during anti-government protests in Tehran on Sunday, Dec. 27, 2009. But like any revolution, most eyes were on Tehran, the capital. It witnessed the fiercest battles between people and forces. At least 8 people have been killed there (including Seyed Ali Mousavi, a young nephew of Mirhossein Mousavi, Islamic Reformist presidential candidate, whose death will have political consequences). The regime was so terrified that “certain police and Basij stations [in Tehran] were evacuated to prevent guns from getting to people.” (Basij and Police Stations Evacuate to Prevent Guns Reaching People & Reports from Isfahan).

Let’s have a quick look at the facts: people are not only fighting back against regime forces but conquering police stations and putting streets under their own control; refusal of some forces to shoot at people; slogans like “This is the month of Blood, Khamenei will be overthrown” and “Khamenei should know, he will be overthrown soon”. It is evident that power is slipping onto the streets!

What does this remind you of?

A revolution, of course.

And this is exactly the mood amongst most youth and people in Iran. A lot of political personalities, almost everybody who has access to mass communication, did their best in the last few months to make revolution a “dirty” world, saying people should not go toward another “failed revolution”. But now the word is used more than ever. Iranians from all walks of life, even those who were defending a reformist position a few days ago, are saying: “A revolution is coming”.

This proves correct our perspectives which said from the very beginning that this is the beginning of a revolution.

As this article is being written, the night festival of Shaame Ghariban (on Ashoora’s evening) is starting and protests are going on everywhere. De facto martial law is in place in a few cities. Some central areas of Tehran are in effective control of people. There have been attempts by people to take over the National TV & Radio building. It is unclear what could send people home. 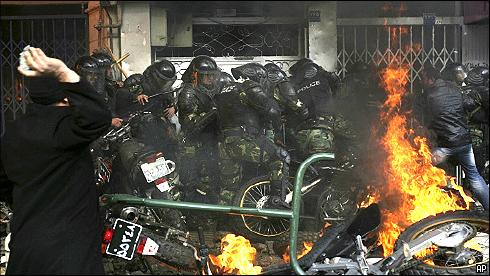 If there was any sort of leadership for the movement, the regime could fall in a matter of days. Lack of such leadership might delay the regime’s collapse but will not stop it altogether. The regime days are numbered… literally.

The most important absent element is the direct role being played by the working class. Workers coming on the scene, with their very own general strike, putting a pause to society would be truly the final death sentence for the Islamic regime. However, the lack of a revolutionary leadership and poor organization of workers is the cause of this not happening yet.

Events of December 27 proved once more and more decisively than ever, the regime’s power is being eroded and it will come down, this or that day, with this or that method.

The fall of the regime, however, will be only an introduction to a period of acute class struggle in Iran. The duty of Iranian Marxists remains forming a revolutionary independent party of the working class that could lead the workers to victory in this period. Important battles lie ahead!

Note: most of the factual information in this text comes from Persian2English Blog, a website run by a few activists from Toronto who are also getting help from people in Europe and other regions. These activists, the present author among them, have been keeping awake for the last 2 days, receiving news and translating it to English it as it happens so as to break the wall of regime’s censorship.

Citizens carry away the body of a murdered demonstrator

Citizens create barricades in the street and chant, “Don’t be scared, we’re in this together”

Iranians stomp on a placard with Khamenei’s name on it

Iranians attack police van and release prisoners from the back seat