Share
Tweet
Iranian regime's attempt to re-bury war dead from the Iran-Iraq War in the grounds of the university spark protests from hundreds of students, clashes with the security forces and over 70 arrests.

Iranian regime's attempt to re-bury war dead from the Iran-Iraq War in the grounds of the university spark protests from hundreds of students, clashes with the security forces and over 70 arrests.

The security forces, with the co-operation of officials from the Ministry of Science and Amir Kabir University (in Tehran), since last week had made arrangements so that the burial ceremony would go ahead without any protests. Mr Rahaii, the University’s Chancellor, had made a request to detain four students locked up at the University, to bar 12 students from entering the grounds of the University, and to contact the families of protesting students to put pressure on them. All these steps were taken to make sure that there were no protests.

During the past two days, after students objected to “burying the martyrs” (i.e., war dead) in the grounds of the University, the authorities changed the ceremony into a public one, so that they could easily bring in the Pasdaran and basiji forces into the campus. From Sunday (22 February) they even publicised this on billboards all over Tehran. On Sunday Ayatollah Khamenei published a statement welcoming the re-burial ceremony to stave off any protests (yet he did not send one for the re-burial at Kashan University on the same day).

In addition, Fars, ISNA and many other news agencies of the authoritarian faction, have published many reports about the advantages of re-burial at the University, trying to threaten the dissenting students. One of the latest cases was when a website published a report that basiji talebs (religious students) in Qom province had held a meeting to express their support for the re-burial. 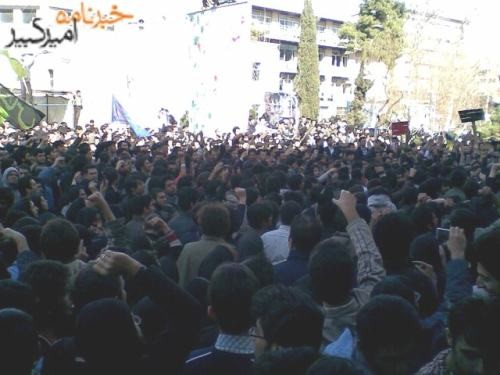 Iranian regime's attempt to re-bury war dead from the Iran-Iraq War in the grounds of the university spark protests from hundreds of students, clashes with the security forces and over 70 arrests.

Despite all these pressures, the students of Amir Kabir wrecked this charade of re-burying the war dead. By chanting slogans like “Dictator of the day, the war dead have become your excuse”, “Down with the Taleban, both in Kabul and in Tehran”, “Basiji get lost”, “Guns, tanks, basijis are no use anymore”, “Down with the dictator”, “Useless basiji, you’ve made the Koran into a spear”, the students protested against the tense security situation at the University.

Brutal attack on the students

The Pasdaran and the basiji forces, who, because of their presence, could not imagine that there would be any protests from the students inside the campus, reacted angrily and brutally by beating the students. The supposed agents of Islam, who were armed with knives, pepper spray and martial arts’ weapons, took out their frustration on the students.

After burying the coffins and beating the students, the arrests started. Within a few minutes of the re-burial ceremony ending, all those arrested were taken away in red vans. At the time there was no information about where they were being taken.

Then Intelligence Ministry agents, helped by the University’s security personnel, were present at the gates to stop anyone leaving the University. Even though many students wanted to stay on campus for a few hours because of the unsafe situation, the Chancellor announced that no one could stay after 7:00 p.m. and asked security to clear the University of all students. At the same time Intelligence Ministry agents, helped by security, checked the IDs of students and arrested those who had been protesting.

According to the latest figures over 70 students were arrested, with most of them being taken to police station no. 107 on Palestine Square. But there is no information about where some of the other students are being held. The University’s security personnel are present at police station no. 107 helping to identify the arrested students. All these students have been photographed and their student cards have been confiscated. The police and security forces have been abusing and swearing at the students; they were particularly angry about the “Down with the dictator” slogan. By Tuesday (24 February) over 40 students were released, with nearly 30 still under arrest.

This statement is based on a report posted on the Amir Kabir University students’ website.