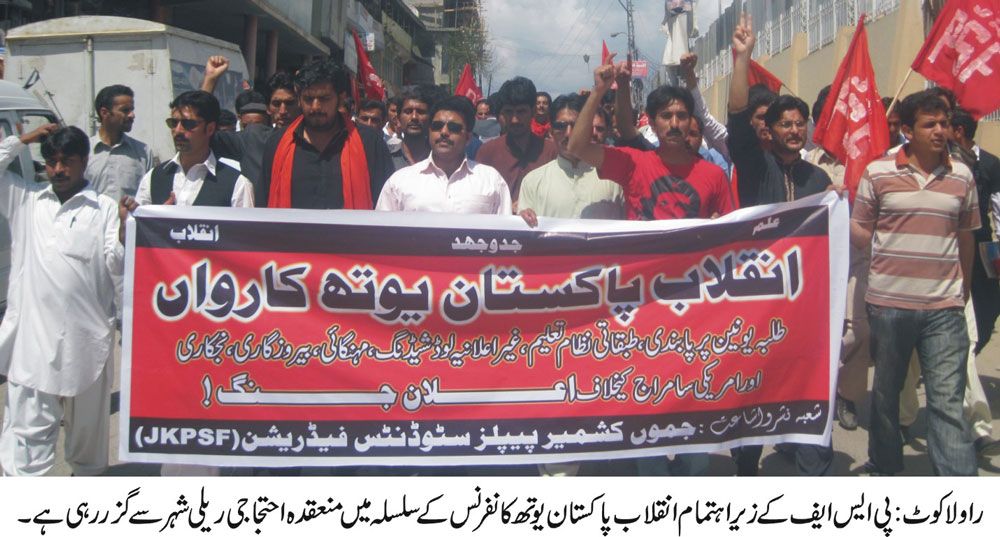 It was a new spark for the rebellion against the capitalist system. On 4th April the conference was held at the Hilltop hotel in Rawlakot in which hundreds of youth from JKPSF, JKNSF, Revolutionary Council Faisalabad, PSF Punjab and BNT participated. This was a remarkable event since the Pakistan People's Party is in government in Pakistan and Kashmir and most of the youth from the PSF and People’s Youth are waiting outside the offices of ministers and government officials in search of jobs and party offices.

Activists belonging to any organization of the party are reluctant to participate in political activities in which any social or economic issue could potentially be discussed because they are afraid of offending the party’s leadership. They were surprised when a handful of PSF youth affiliated with the IMT announced the holding of the Inqalab e Pakistan Conference on Zulfiqar Ali Bhutto’s death anniversary. The lackeys of the party leadership not only tried to sabotage the conference by issuing show cause notices in an attempt to expel them, but also launched a smear campaign in the media against the comrades. When their attempts failed to yield any result they tried to demean the political significance of the conference by holding an official programme with chief guest Farzana Yaqoob, minister of social welfare, as the last resort. But the revolutionary determination of the PSF comrades and a campaign based on the genuine issues of the youth made this conference a success. A rally of more than 400 youth started from the postgraduate college and after passing through the city reached the Hilltop hotel. The program was started by singing the workers’ Internationale.

After that an audio message from comrade Arsalan Ghani was played who has recently won the Graduate Union elections in Cambridge University. He is the first Pakistani to win an election to such a position in Cambridge University and this he did based on a fighting programme against fee hikes and austerity. Arsalan Ghani condemned the ban on student unions in Pakistan and urged the youth to come out in a struggle against this barbaric capitalist system. He said that socialist revolution is the only solution for the problems faced by humanity today. Following is the complete text of his speech.

“Red Salute to the comrades of the All-Pakistan Progressive Youth Alliance. It is an honour for me to be given the opportunity to speak at this PYA conference. We all know how difficult this period is for the youth. Life has never been harder than it is now. Today, if the youth think that they can lead a peaceful life, they are born in the wrong period. This is an epoch of struggle against a system that has no country, no religion and no nation.

“Our war against this system must be free from the shackles of nation, colour, race and religion. Only then can we be victorious. Our struggle is international. The right to education was a major victory of the working class. The people and their leadership have waged long struggles and given numerous sacrifices to make education a basic human right from a luxury for the rich few. But this right is being attacked again. There is a fee in every institution. Schools, colleges and universities have been turned into profit making machines. Once all the educational institutions were controlled by the state, now they are being privatized. The few that have remained in state control are being ruined. In this process the poor students are the ones who are suffering the most.

“Privatization has led to a class system of education. On the one hand there are schools that lack even the most basic utilities. They are without proper buildings, furniture or motivated and qualified teachers. The course being taught is obsolete and substandard. Most of the pupils here cannot even think of further education. On the other hand, there is the market of private schools where the profiteers are extorting the students and their parents. These shopkeepers have the support of the government and now some schools have opened chains across the country. The government is failing to maintain the existing schools let alone open the new ones. There is a shortage of thousands of schools and the government spends millions on advertising the few schools that they open.

“The state of colleges and universities is abysmal. The foremost problem is the ban on students’ unions which was imposed by the worst dictator of the time and the so called democratic governments have refused to end it. Due to this ban the colleges and universities have become bastions of scoundrels. Religious and political bosses have their thugs and politicians have a hold over these institutions. The so called religious leaders distracted the innocent students and recruited them for jihad financed by the monopolies. It is a dream for the poor to send their children to a college or university.

“Along with the fees, the private tuition culture has ruined the purpose of education. Some professors have gone to extremes in this plunder. The private universities are providing everything but education. There is a competition amongst the universities to produce the best raw material (human beings) for the capitalists to maximize their profits. There is a high demand for degrees that are used to increase their profits and the poor cannot afford to get them.

“The only research conducted in the universities is that which fills the pockets of government officials, professors or helps the multinational companies in their profits. Huge sums of money are spent for that.

“The capitalist system has snatched the resources form the governments and has given them to private capitalists. This is happening all over the world. The governments all over the world are cutting the funds for schools and universities and raising the fees. So the universities have to look towards private companies to continue the courses. The students are forced to seek loans from banks after the fees hike. The capitalists and bankers are making profits from all this.

“This is happening in times when the students are unable to find jobs. The capitalists and their pet governments have failed in providing employment. Unemployment is sky high. Life is getting harder. The middle class is getting poor and the poor are getting poorer.

“But things will not remain the same. They have to be changed to take humanity out of this misery. The only way for this is through a socialist revolution. A revolution which will utilize the fortunes of capitalists for the betterment of the people and establish a government of the workers. This is the only way forward. This is socialism. This is the ideology which permitted me to win in the largest right-wing university in the world.

“From the platform of the all Pakistan Progressive Youth Alliance let’s make a vow that we will transform these miserable lives of youth and fight for a socialist revolution. This is the revolution for which Bhagat Singh struggled. I announce complete solidarity with PYA and I will keep on raising my voice in support of the struggle of Youth of Pakistan and south Asia from the platform of Cambridge University. Thank you.”

The conference was presided over by the chairman of the PSF publicity board, comrade Saqib Farooq and the chief guest was chief organizer of the Progressive Youth Alliance, comrade Amjad Shahsawar .Comrade Asim Ghazan was the stage secretary. The large number of youth from the local PSF in the conference forced the minister for Social Welfare, Farzana Yaqoob to leave the official program and come to the conference to show solidarity. Upon her entry into the hall revolutionary slogans were raised including “People will take by force, bread,  clothing and shelter”, “No to compromise, keep the struggle going”, “Long live the Socialist Revolution” , “Friend of America is a traitor” , “the struggle goes on as long as the masses are in misery”.

The speakers denounced the PPP’s policies of compromise and subservience to imperialism. The speakers said that capitalism is in crisis all over the world and it is attacking what the youth and workers have won by their struggles in the past. There is a storm of revolutionary movements in response of these attacks. In Pakistan the PPP government is betraying the youth and the workers in the name of a policy of reconciliation. The workers are being crushed under the pressure of price hikes, unemployment, expensive education, load shedding and privatization. But the situation in the world shows that a revolutionary storm of youth and workers’ movement will hit this region soon. This conference and other activities of the PYA across Pakistan is a testimony to the fact that the process of formation of revolutionary forces capable of leading a mass movement to socialist victory is speeding up. A revolution in this region will be the beginning of the world socialist revolution. The conference was ended by singing the Internationale.

After this program, the leadership of the Progressive Youth Alliance will visit Rawalpindi, Malakand, Peshawar, Kohat, Bannu, Dera Ismail Khan, Dera Ghazi Khan, Kot Addu, Multan and other cities in the next few weeks to urge solidarity among progressive students' organizations in Pakistan to wage a class war for the rights of students and Youth through a socialist revolution.