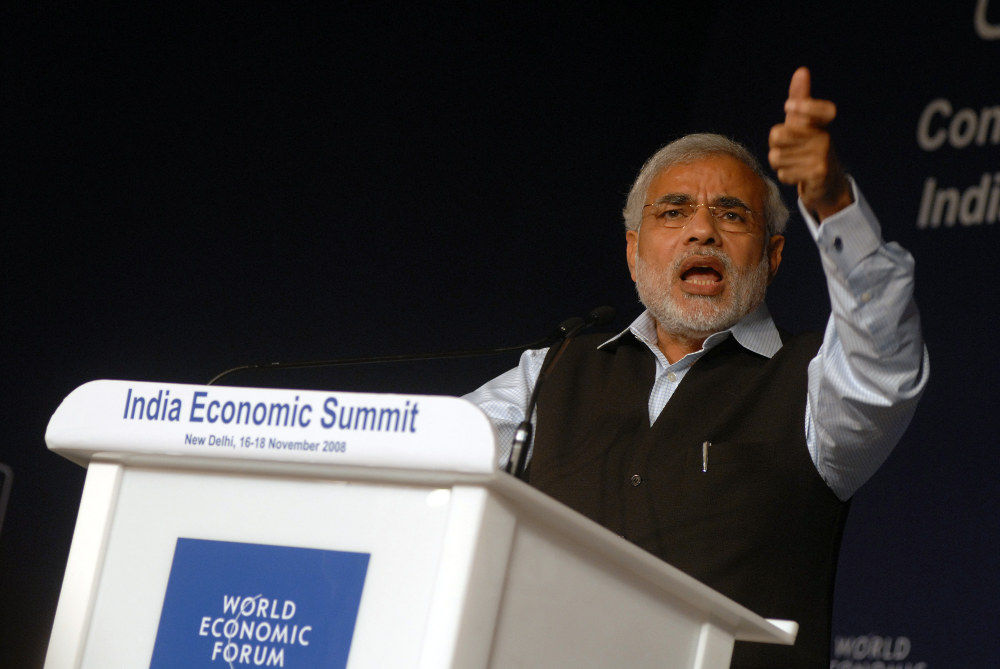 One of the cruellest features of the present period of lull and social stagnation in the Indian subcontinent is how economic and social conditions are seen from the standpoint of the bosses who have a total disregard for the pain and misery inflicted by this economic development on the heaving masses.

The media and the dominant intelligentsia are voicing their adulation for the growth of the economy of Gujarat and accrediting Narendera Modi, the Hindu fundamentalist chief minister of the state, for this success. His anointment as a prime ministerial candidate by the Bharatia Janata Party (BJP) high command has laid bare the dark reaction of the Indian right wing and the total bankruptcy of so-called secular Indian politics and the state. The nationalist Indian bourgeois and the imperialist corporate strategists have come out openly in support of this religious bigot.

Most business houses in India and bourgeois economists have embraced Modi. The Economic Times in its September issue published results of a poll of 100 Indian corporate leaders - 74 of whom would like to see Modi as the next prime minister, compared to 7 who opted for possible Congress candidate Rahul Gandhi. British economist and author Jim O’ Neill wrote in his blog that Modi is "good on economics" and that one of the things that "India desperately needs in a leader". In August 2013, this financial analyst wrote in his weekly Greed & Fear that "the Indian stock market's greatest hope is the emergence of Gujarat Chief Minister Narindera Modi as the BJP's prime ministerial candidate".

During Modi’s visit to China in November 2006 he studied the feasibility of the Special Economic Zones being set up in Gujarat. In India these SEZ’s are notoriously infamous as the Special Exploitation Zones. A month after his visit the Chinese regime released 13 Indian diamond traders who had been jailed by the Customs authorities in Shenzhen. Modi described their release as being the consequence of his diplomatic efforts and statesmanship.

In 2011 Pakistani business tycoons were so overwhelmed with Modi’s business charisma that the Karachi Chamber of Commerce extended an invitation to him to visit Pakistan and address prominent business leaders. Some suggested Pakistan could follow the 'Gujarat Model'. Modi’s golden harvest for Gujarati bosses, and bitter pill for the working masses, sucked in Western imperialist nations. The United Kingdom refused to deal with Modi for a decade following the 2002 violence but lifted its diplomatic boycott in October 2012. Later, in March 2013, the European Union also ended its boycott, completing forgetting his active role in the massacre of over 2000 innocent Muslims during the 2002 state instigated massacre. The international bourgeoisie is justifying its somersault by saying that engaging with Modi was a separate issue from that of protecting human rights and those of women.

The general conditions of the masses in Gujarat itself are abysmal and Modi has been ferociously attacking the trade unions and workers struggles. It’s not for accidental or sentimental reasons that Modi is so much of a darling for the bourgeois bosses in India and internationally. He had imposed severe conditions on workers and carried out the brutal neoliberal policies of privatisation, down sizing, liberalization, restructuring and reductions in corporate tax with added benefits for the capitalists.

In the Global Hunger index, Gujarat is in the bottom 5 states in India, and globally performs worse than even states like Haiti. 80% of children below 4 years of age and 60% of pregnant women are anaemic in Gujarat (A virtual anaemia epidemic that Modi cynically laughs off as a case of ‘beauty conscious girls’ starving themselves!). Modi is notorious for imposing the aggressive economic policies of a brutal capitalist system that have been responsible for the deaths of thousands of children, women and the elderly from hunger and curable diseases. Modi becoming prime minister will further exacerbate the terrible misery, disease, poverty, price hikes and unemployment the Indian masses are currently going through.

The rise of Modi also indicates the desperation of the Indian ruling classes that are now using religion more than ever before to break class unity and are indifferent to the bloodshed that the violence of this religious hatred evokes. Modi is a diehard activist of the reactionary Hindu chauvinist Rashtriya Swayamsevak Sang that takes inspiration from Hitler, Mussolini and other fascists. It is the main force in the Hindu nationalist umbrella organization, the BJP. It was actually the RSS that forced through Modi’s anointment for the prime ministerial slot.

The growth rate in India has less than halved and the rupee has depreciated to record lows. Inflation and the fall in the growth rate are already hurting the middle classes. This petite bourgeoisie that was the bastion of fundamentalist reaction is now in severe turmoil and facing the brunt of this crisis. According to Business Insider, “As capital outflows continue, India is struggling to plug its widening current account gap (6.7% of GDP last year). This has become the worst economic crisis for the nation since 1991, when India's government, faced with depleted foreign reserves, had to resort to asking the IMF for help. At the time, the country had secured a $2.2bn loan, backed by 67 tons of gold reserves. To satisfy the IMF's concerns about access to the collateral, the RBI had to airlift 47 tons of gold to be deposited offshore with the Bank of England and 20 tons of gold with UBS. While such action is unlikely this time around, if the crisis continues to escalate, Asia's third largest economy will struggle to grow. Even though economists still do not expect a contraction, it is now a real possibility.”

The crisis afflicting the Indian economy exposes the fragile nature of Indian capitalism. Its ruling classes have failed to create a modern nation state. To continue this system will require even more vicious attacks upon the toiling masses. India has 20 percent of the world’s population and hosts more than 40 percent of its poverty. More than two thirds of its population is forced to live in absolute poverty. The designated poor for the Congress Party’s food handouts have been numbered at more than 810 million. If a despot like Modi is used to bulldoze through this atrocious programme, it will be a drastic provocation that could ignite a revolutionary inferno. The Indian proletariat has glorious traditions of revolutionary struggles. There have been massive strikes in recent months. Karl Marx once wrote that, “Some times the whip of counter revolution is necessary to make the revolution move forward.” Modi in power could prove to be just that whip.