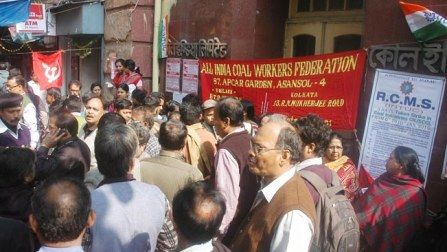 At the beginning of January 500,000 miners in the nationalised coal industry in India went on strike against governmental plans to privatise coal mining. This monumental show of strength in defiance of the Coal Ordnance law is indicative both of the tensions within Indian society and the pressure that is being brought to bear on the leadership of the working class to put up a fight.

A 5-day strike by all workers in the coal industry was called by the central trade unions to take place between January 6 and 10 against plans to privatise parts of the industry under the Coal Ordnance law.

Ramendra Kumar, President of the All Indian Trade Union Confederation said: “The central trade unions call upon the coal workers of CIL/subsidiaries and SCCL to launch the five-day total strike in the coal industry from the first shift of January 6 to the third shift of January 10 in the most militant manner… It is time for coal workers to do or die.”

The strike was backed by all five major trade union confederations, including the Bharatiya Mazdoor Sangh (BMS) which is a federation connected to the ruling Bharatiya Janata Party (BJP). This demonstrates the sheer amount of anger which has been bubbling up from the depths of the working class that is under immense pressure.

This joint action by the All Indian Trade Union Congress (AITUC), Indian National Trade Union Congress (INTUC), Centre of Indian Trade Unions (CITU), Hind Mazdoor Sabha (HMS) and the Bharatiya Mazdoor Sangh (BMS) drew in all 500,000 workers in the industry. Although there have been other occasions in recent years in which the central trade unions have taken part in joint action, most notably in all-India general strikes in 2012 and 2013, this is by far the biggest industrial action since the turbulent decade of the 1970s.

In the 1970s we saw massive struggles as that of the 1.7 million workers on the railways striking for 20 days and bringing the country to a standstill, which remains the largest single strike ever recorded. This and other strikes and movements marked the 1970s as a decade of profound change and crisis in India and the return today of events of a similar dimension is a precursor of what is to come during the current period.

Effects of the strike on the economy

The effects of the miner’s strike were felt from day one. CIL provides Indian industry with 80% of the coal needed to feed production. Up to 50% of power generation is fuelled by coal, which would make the knock on effects of any prolonged action to be felt immediately, cutting into the output of the manufacturing sector. The margins of big business and the health of the economy as a whole would be under threat. This shows the strength and social weight of this section of the working class, but also the seriousness with which the government needed to bring an end to the strike as soon as possible.

Before the strike had even begun, 58 power plants had no coal stockpiled at all, whilst 38 others did not have enough stocks to last the planned length of the 5-day strike. Others were not prepared a great deal more and with the prospect of the chaos of transporting coal across the country, especially if the call had also been sent out to the workers in distribution to strike in solidarity and refuse to transport coal.

After the first day of the strike, estimates show that production had been cut by up to 60% in total with over 50% of production units producing no coal at all. Buoyed up by the success of the strike, trade union leader SQ Zama said in an interview to the Mint: “The ball is in the government’s court now and if they don’t start a dialogue with us by today, we will announce extending the strike to 10 days and prepare ourselves for a prolonged movement.”

The militancy of the workers was spreading, on the one hand emboldening the leaders and on the other hand signalling a call for action for other sectors. Jibon Roy of the All India Coal Workers Federation said on the Tuesday night:

“…electricity worker’s union EEFI has also extended its support to the strike call.

“Separately, employee unions had called a one-day strike at public sector banks tomorrow, to be followed by another four-day strike later this month but deferred their action after talks between employee and management representatives earlier this evening.”

It is clear that the mood across the country was heating up. Whilst the electricity workers and bank employees have their own issues which are affecting them, nonetheless these struggles are part of the same process. The onslaught of the past 20 years against the working class has been further stepped up by the Modi government. The privatisation in the public sector, including banking, and the continuous attacks on living standards and working conditions have pushed the working class to the brink.

Over the past few years this has expressed itself in the organisation of several general strikes. However, the lack of a serious programme and a plan of action on the part of the leadership have left these strikes ineffective. That is why the coal workers’ strike, which not only had radical stated aims, but also took radical practical steps in reaching these aims, immediately struck a chord with wide layers of the working class. Such an escalation would have proved an outright challenge to the legitimacy of the government itself.

Therefore panic struck the ruling class on the second day. A wide series of back room negotiations, diplomatic meetings and talks between union leaders, members of the board of CIL, local government ministers and Anil Swarup, Coal Minister, took place. From the point of view of the ruling class, the impending crisis with its threat to the wider Indian economy needed to be averted.

Therefore, following several marathon meetings, Coal and Power Minister Piyush Goyal, signalling a full retreat of the government and a victory for the workers, said: "There is no intention for denationalisation of CIL. The present and future interest of CIL employees will not be affected in any manner. CIL will be protected and there need be no apprehension about its ownership or management going into private hands."

The Coal Ordnance law was an important step in the privatisation programme of the government. It would allow private companies to bid for up to a 10% stake in Coal India Limited (CIL) and to mine and sell coal for the first time in India. This has not been allowed since the sector was nationalised in the 1970s. However, by their actions the workers showed that the government would not be able to carry out its programme if the working class resisted them in an organised and militant manner.

It is also clear, however, that the struggle is far from over. India's Hindu fundamentalist Prime Minister Naredna Modi, in spite of worker resistance, is determined to carry out his privatisation programme. In this respect, it is clear that the retreat from the CIL privatisation was merely a temporary measure which he used in order to re-think his strategy. This became immediately clear when Coal and Power Minister Priyush Goya, speaking at the World Economic Forum, announced that he expects the first auctions for shares in CIL to take place soon. The Modi government is also preparing to carry through a reform of the labour laws which he promised immediately after coming to power.

Modi has been hailed by the bourgeoisie internationally due to his ruthless stance and his promises of wide-ranging privatisations and attacks against the working class. The government has set a target of raising up to $10billion in so-called disinvestments in 2014/15. The sale of a 10% stake in CIL, which ministers hope will raise an initial investment of up to $6billion, would go a long way to reaching this target. This is, however, a very short-sighted move since the coal industry is very profitable for the state and also has large cash reserves. In effect the privatisation of such important and profitable companies amounts to nothing less than a robbery.

For Modi this is an even more important issue, since he came to power promising the ruling class that he would be strong enough to carry through some of the measures that the previous Congress government could not.

The privatisation of the CIL in fact started in 2010 when the company's shares were floated on the Bombay Stock Exchange. At the time, many believed this would be a first step in the direction of real privatisation with the norm of companies on the Stock Exchange having a maximum of 70% state ownership, and the recent developments have proven just how right these concerns were. However, the previous government was not able to carry through this plan due to pressure from the masses, as well as divisions amongst the ruling class on how to divide the loot.

In the first months with Modi in power the same situation continued, which is why in December Modi personally enacted the Coal Ordinance the law by Executive Order. This fact also means that the retreat of the government was even more humiliating, as Prime Minister Naredna Modi had put his personal prestige and legitimacy behind it.

As the world economic crisis deepens it is obvious that the Indian bourgeoisie is determined to defend its positions and privileges, first and foremost by organising an all-out attack on the Indian masses. Every single concession that the working masses have won over the past 40 years will be under attack. This is a finished recipe for class struggle. 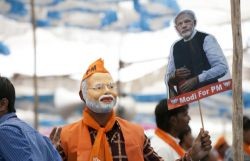 When Modi, who is a far right Hindu extremist, came to power last year, many on the left in India were shocked, especially since the Communist parties were severely weakened in the elections. Many mistakenly despaired and blamed Modi's victory on the “low level of consciousness of the masses.”

As we can see from the recent strike, however, the Indian working class does not have a low level of consciousness, but was merely repelled by the corrupt Communist leaders. These “leaders” have completely abandoned the cause of Communism and Socialism in favour the "free market". That explains why many workers do not see any difference between them and other bourgeois organisations.

In reality, however, far from opening a period of reaction and counter-revolution, Modi's policies will eventually lead to intense class struggle. The coming period will see more clashes as the ruling class attempts to force through its agenda. Successive waves of struggle will come and go, with various layers of the working class being thrown into action and wider, and wider groups of workers drawing revolutionary conclusions.

One year after taking power, the BJP stands exposed as a government of the bosses and the working class is drawing radical conclusions from all this. In the Coal strike the embryo of a militant national general strike movement was clearly present. The militant actions of the miners immediately struck a chord with the rest of the working class who are looking for a radical way out of the present conditions of exploitation and decay.

In the end, the battle against privatisation today cannot be won through isolated strike action alone. So long as the levers of economic and political power remain in the hands of the capitalists, even important victories like that of the Indian coal workers will only provide temporary respite from the onslaught of the ruling class. The struggle of the workers in the Indian coal industry must be raised to a revolutionary struggle against the entire rotten bourgeois system which is threatening the social cohesion of the country as a whole. Thus the struggle against privatisation must eventually be turned into a struggle for the expropriation of the bourgeoisie itself.