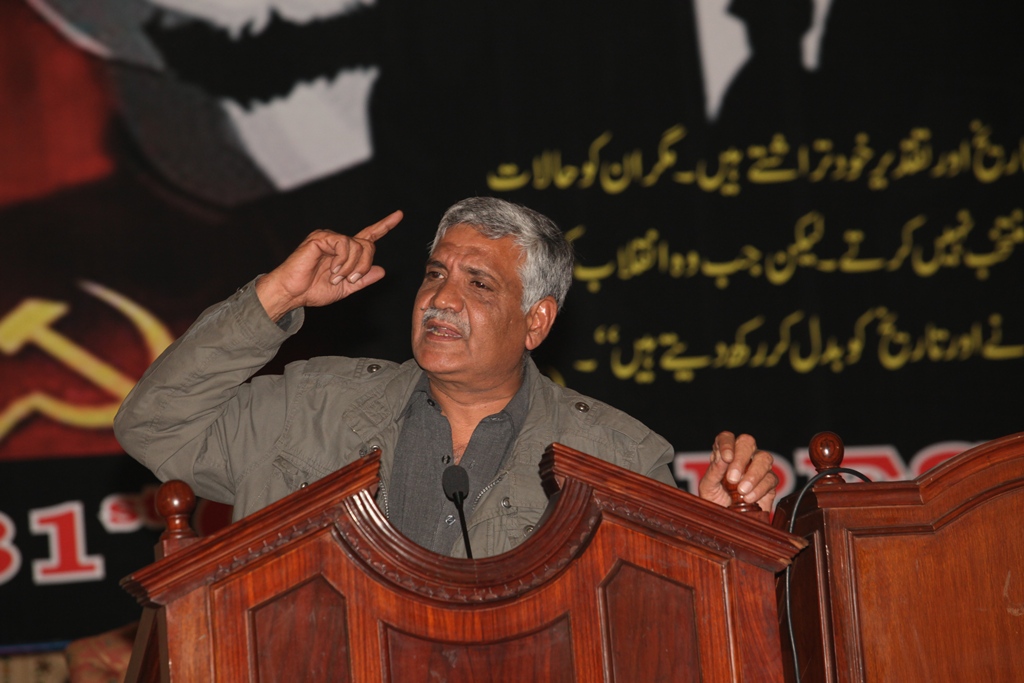 I have just heard the sad news of the death of Tanvir Gondal, a dear friend and comrade of mine. Although he had been ill with cancer for some time, the news of his death was nevertheless a cruel blow.

It is true that in recent times we had been separated by some serious political differences, and it is a matter of deep regret that I was unable to be with him in this last, most difficult period. But at this moment, I cannot think of the differences. I can only think of the great and deep friendship that bound us together for many decades. When all is said and done, what united us was far greater than anything that divided us.

It is to that friendship that I now turn in what must be my final farewell to a beloved friend and comrade. I first met Tanvir in 1980 when he was a political exile in Europe. I remember him as a handsome, likeable young man, entirely dedicated to the cause of socialism and world revolution. We immediately struck up a friendship, which lasted for the best part of four decades.

In the course of my revolutionary life, which has lasted for sixty years, I have had many friendships with many fine people. But I think I can say that none of these friendships has been so close as that which united me to this man. It was not just a question of political agreement, which remained absolutely unshakeable for almost all this time. It was a warm, human relationship, born of profound mutual respect and confidence.

Tanvir was born the only son of a landowner in a small village in a remote part of the Punjab. That rugged land was an area that provided soldiers for the army from very distant times right up to the present. Unlike the lush green pastures of the central Punjab, this is a harsh and unyielding land, broken by mountains, rocks and stones. Tanvir used to say to me: “This land does not produce wheat, fruit or vegetables. It produces soldiers.” The people here are tough and resilient. They are also cheerful and enjoy music, dancing and jokes. But in time of war, as he explained to me, the villages are full of wailing women, mourning the death of their menfolk.

His father was an officer in the Pakistan army who naturally assumed that his son would follow in his footsteps. But Tanvir was always stubbornly independent, and he had other ideas. He wanted to study medicine, to become a doctor. And the intolerable injustices of society led him to seek the road to socialist revolution.

One of the hardest things he had to bear was not being able to be with his father when he died, being unable to travel to Pakistan under the dictatorship. But he remembered his father with great fondness.

He told me that in one of the last conversations they had, when his father learned of his revolutionary vocation, he said to him: “Son, no matter what you do, fight for what you believe. Remember you are a soldier. Never turn your back on the enemy. If you are going to be killed, make sure that you are shot from the front.” He took this advice to heart.

In the 1970s, Tanvir was a student of medicine in college and a political activist in Pakistan, participating in gun battles with the fanatical Islamist counterrevolutionaries on campus. After the 1977 military coup led by General Zia-ul-Haq he was imprisoned for a year.

He managed to escape to the Netherlands in 1980, where he began to organise a group of left-wing Pakistani exiles around a paper called The Struggle. It was at this time that he went to London with the express purpose of establishing contact with the leading British Marxist, Ted Grant.

From the very first moment, Ted formed a warm friendship with this young Pakistani revolutionary, of whom he had a very high opinion. For his part, the attitude of Tanvir towards Ted was one of profound admiration, almost, one might say, of reverence. In his house in Lahore, a large photograph of Ted with Tanvir still occupies pride of place on the wall. 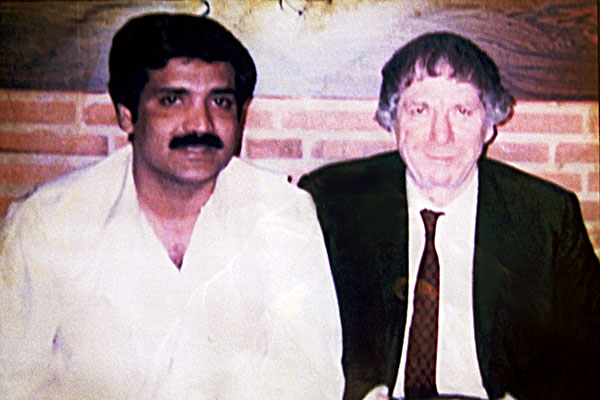 In his house in Lahore, a large photograph of Ted with Tanvir still occupies pride of place on the wall.

I was in Spain at that time, conducting revolutionary activity. But I often met Tanvir at international meetings, and we struck up a great friendship. Like Ted, I had a very high opinion of his abilities.

Towards the end of the 1980s, he decided to go back to Pakistan. Although the situation had improved after the death of the hated dictator in an air crash, undoubtedly an assassination, the situation in Pakistan remained very difficult. Ted had doubts as to the wisdom of his return, but Tanvir persisted, and achieved remarkable results in a short space of time, starting virtually from nothing.

At the time of split in the International, Tanvir was absolutely firm in his support for the minority led by Ted Grant. I was made responsible for Pakistan section of what later became the IMT and visited the country on many occasions.

I have very fond memories of those visits, during which I was able to observe first-hand the extraordinary growth and development of the Pakistan section. Of course, there were difficulties and problems of all sorts, but despite all the problems, the section grew by leaps and bounds.

The congresses of the Pakistan organisation were very impressive affairs, although, to tell the truth, they were more like rallies than congresses in the proper sense of the word. Large numbers of people came from all over Pakistan to attend these events which, for many comrades were the high point of the year’s activities.

This is not the place for me to talk in any detail about the political activities and achievements of the section. Nor is it the purpose of an obituary to do so. However, I must say that I met some very extraordinary people during these visits. One of them – a poor landless peasant from a remote rural area in Sind – had been a bandit (“dacoit”) in his youth and had been in prison, from which he escaped before finding his true vocation as a revolutionary. His life story would have made a very impressive novel.

Another was an old communist (Jam Saqi) who had been imprisoned and brutally tortured under Zia-ul-Haq. He then spent years in solitary confinement, which he said was far worse than torture, with no kind of human contact for years on end. He told me that he would often wish that they would take him out of his cell to be tortured, so that he could at least hear a human voice again. 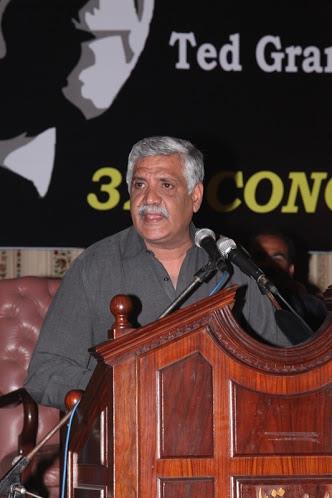 In those years, following the Congress of the section, Tanvir often invited me to accompany him to his village, where I met his mother – a remarkable old woman who dressed simply and carried on domestic tasks together with the servants. She could be seen very early in the morning, bent double, sweeping the patio with an old-fashioned broom. It was a kind of life that reminded me of Turgenev’s descriptions of rural Russia in semifeudal times.

Tanvir liked to go to the village so that he could get some peace and quiet to write. And in fact, he wrote quite a few books on the history of Pakistan, the crime of partition, the 1968-69 revolution, Kashmir, etc. He also travelled a lot to different parts of Pakistan. But he spent most of his time in Lahore.

Before the Zia-ul-Haq dictatorship, Lahore had been the artistic and cultural centre of Pakistan, and perhaps of the whole subcontinent. But that monstrous Islamist dictatorship tore the heart out of Lahore. Its cultural and artistic life suffered dreadfully, and never fully recovered.

Despite that fact, some elements of the old cultural life still remained. Tanvir’s house became a magnet for cultural personalities, such as two remarkable men. One was Javed Shaheen, a very gifted writer and poet, and a dedicated communist who put this great talent at the service of the workers and peasants, the poor and oppressed. The other was my old friend Munnu Bhai, a highly talented and respected journalist, a fine poet and a man of great culture and personal charm.

To many Europeans it may seem strange that poetry can serve as a revolutionary weapon that can find an echo in the oppressed masses. But there is a long history of revolutionary poetry in the Subcontinent, where ordinary people are moved by a very ancient tradition of oral poetry and song.

I remember on many occasions sitting on the roof of Tanvir’s house together with these old intellectuals, spending hours talking about politics, religion, philosophy, art and poetry. They used to recite their poems, and Tanvir would sing songs about revolution or love, as the mood took him. He actually had a very good singing voice.

There are so many other memories that I have. But above all, the memory that I have, and will always have, of Tanvir Gondal is of a dedicated revolutionary Marxist and a warm, kind and generous friend.

Did he have faults? Oh yes, he had many of those. But which of us does not? And in the grand order of things, his virtues and abilities by far outweighed any negative considerations. Even his harshest critics cannot in all justice deny that he played an outstanding role in building the forces of Marxism in Pakistan.

He left a lasting impression on everyone who knew him, and his influence spread far beyond the frontiers of Pakistan. Particularly in India he was known to many on the left as an outstanding figure in the revolutionary movement of the subcontinent.

Many thousands of miles separate me from Lahore. And now an unbridgeable abyss separates me from my old friend and comrade. But from a distance I dedicate to his memory the following moving stanzas:

THEY told me, Heraclitus, they told me you were dead,
They brought me bitter news to hear and bitter tears to shed.
I wept as I remember’d how often you and I
Had tired the sun with talking and sent him down the sky.

And now that thou art lying, my dear old Carian guest
A handful of grey ashes, long, long ago at rest
Still are thy pleasant voices, thy nightingales, awake;
For Death, he taketh all away, but them he cannot take.

Our deepest sympathy goes to Sadaf and the children and to Paul (Rana), Tanvir's lifelong friend and loyal companion.