Details
In Defence of Marxism
10 December 2019 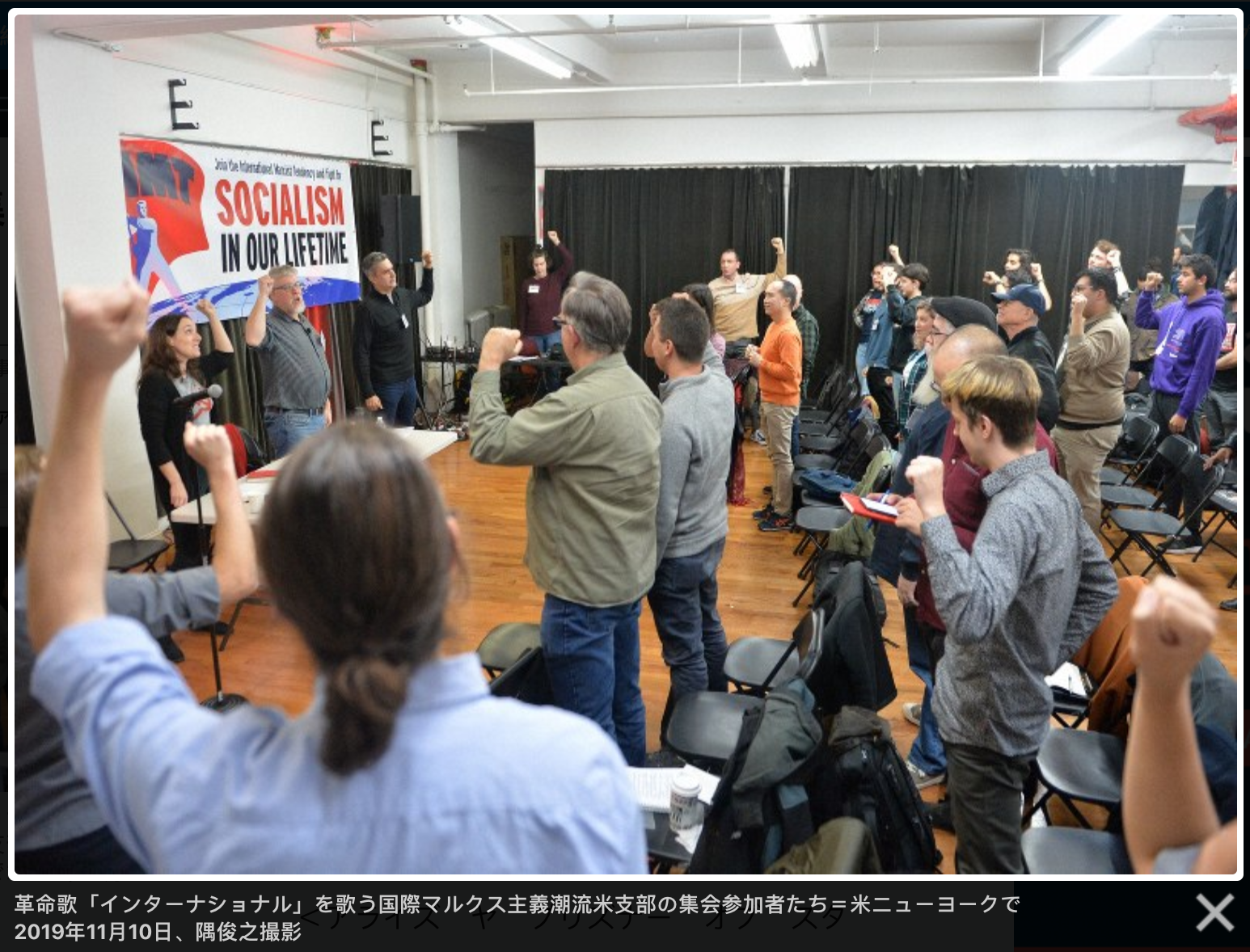 On 1 December, a feature article about the IMT made the main headline on the front page of one of Japan’s top daily newspapers. The Mainichi Shimbun (“The Daily Paper”) is Japan’s oldest major newspaper, founded in 1872 and published twice daily, with a circulation of 4 million. We publish below for our readers the English translation of the article, entitled The Internationale Resounds in NYC—Socialism Resonating with the Youth.

In preparation for this article, the chief of the Mainichi New York Bureau attended both days of the NYC Marxist School, organised by the IMT branches in New York, and attended by comrades from throughout the region. Although some of the quotes are inexact and the writer’s conclusion is that “socialism doesn’t work,” the coverage by Mainichi highlights the rapid growth of socialism among the young working class of the US, driven by this generation’s bitter experience of falling living standards and capitalist crisis.

This report also shows that interest in these ideas extends to Japan itself. Although it is largely isolated by geography and language from the rest of the world, the molecular process of revolution also applies to this country of 126 million people, which has undergone a decades-long economic and social crisis.

Although it has become commonplace to see socialism in the headlines of US media, the prominent mention of the IMT is relevant for another reason. Marxism—not just socialism in the abstract—is on the rise in the US. All the latest polls confirm a dramatic trend of radicalization within the belly of the beast of world imperialism. One recent YouGov poll found that among US millennials, 35 percent hold favourable views of Marxism, one in three hold a favourable view of communism, and one in five are in favour of the abolition of private property.

Clearly, these figures reflect a radicalising trend that goes far beyond the reformism of figures like Bernie Sanders and Alexandria Ocasio-Cortez—although their rise is symptomatic of the leftward shift in society. Under the impact of this sea change in public opinion, the comrades of the IMT have been making rapid gains.

Although we are still a small organisation compared to the tasks before us, we are growing at a faster pace than ever, and in the past year alone the US section of the IMT increased its presence from around 30 cities to over 40 across the country. We are confident that the future is bright for revolutionary socialism.

[Print title]: The Internationale Resounds in NY—Socialism resonating with the youth

On December 3, 1989, US and Soviet leaders declared the end of the Cold War at the Malta conference. Over the past 30 years, the global order that the West, led by the US, should have built has swayed, creating new conflicts and divisions. What kind of world awaits us in this post-Cold War era?

“Arise Ye Prisoners of Starvation…” It was a wintry, windy day in Manhattan on November 10th. At the end of a two-day gathering in a room of a multi-purpose building, about 90 young people stood up, fists in the air, and started singing the revolutionary anthem "The Internationale". Thirty years ago, the United States led the capitalist western world and ended the East-West Cold War. Today, the song that symbolizes socialism can be heard reverberating from the heart of the US economy.

The meeting was organised by the US section of the International Marxist Tendency, a socialist organisation headquartered in London. The theme of the event was “Socialism or Barbarism.” Participants nodded uniformly when National Secretary John Peterson appealed to them: "The billionaires and CEOs don't care about us. Let's fight for socialism!"

The US has seen a growing discontent over the concentration of wealth among a small number of the richest people. Many young people are struggling to repay their tuition loans and cannot afford medical insurance. For IMT member Antonio Balmer (27), who was a high school student in 2008, the financial crisis was a life-changing event. His father, who was in the construction industry, was impacted by the global financial crisis, lost his job and had to sell off his home and assets. “The whole family moved into my grandmother's house. At that time I got to thinking. What is this capitalist system?” Since that year, he has been participating in the activities of the IMT, which he found after searching on the Internet.

In the US, where the memory of the US-Soviet Cold War remains, socialism and communism have been viewed as taboos. However, for the generations born after the collapse of the Soviet Union, this attitude of opposition has faded. They didn't have the first-hand experience of the Stalin dictatorship (1920s-53), in which the opposition was purged and many died of hunger. Oz Melchor (22) is studying at university to become a teacher, but works on weekends to help pay the rent of her home where she lives with her mother. I asked her whether socialism under Stalin hadn’t resulted in many victims, and she replied “Many people are dying today under capitalism. When I suffered from a joint disease, I was able to get insurance coverage. If I didn’t have insurance, I would have had to come up with $80 a month. But I was fortunate. People are dying who can’t afford health insurance."

According to a 2018 poll by Gallup, 51 percent of young people aged 18 to 29 answered that they had a “favourable view of socialism,” surpassing the 45 percent who prefer capitalism. Balmer said, “Anyone who is interested in history should study the lessons of the Soviet Union. But socialism is no longer a taboo. Young people are demanding a radical solution because they are in a dramatic crisis.” When the Cold War ended, the West was jubilant with victory, and many saw it as the failure of socialism. But as Peterson, the national secretary of the US IMT said: "Capitalism is failing today!" 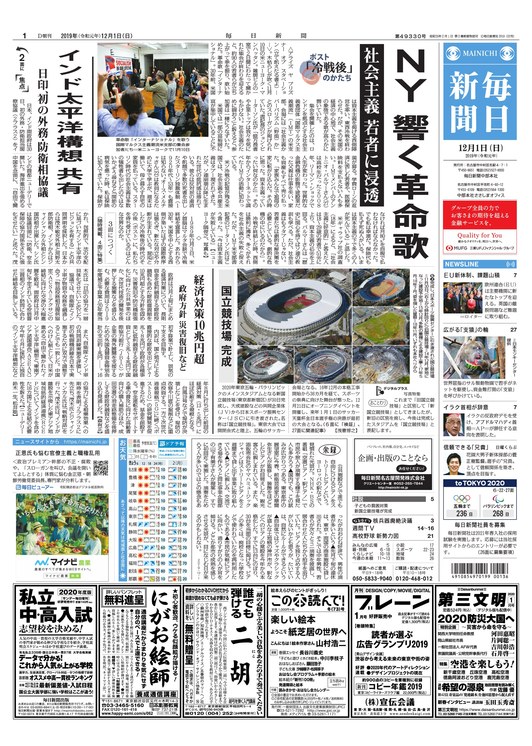 “Why young voters are choosing democratic socialism” (New York Times). “When did everyone become a socialist?” (New York Magazine). It is not uncommon to see socialism in the headlines of US media nowadays.

Many young people who are inclined to socialism in the United States have joined the nation’s largest socialist political group, “Democratic Socialists of America” (DSA). For next year's presidential election, they support Senator Bernie Sanders, the Democratic Party candidate who is appealing for free tuition at public universities and public universal insurance. Its members have grown from about 5,000 in the 2016 presidential election to about 60,000.

History Professor Michael Kazin of Georgetown University points out that the 2008 Lehman shock that led to the global financial crisis was a turning point. “In Europe, social democrats were criticized for responsibility for the crisis within power, but that was not the case in the United States, and socialism had a certain novelty,” he said, adding that the Sanders campaign in the last elections sparked the fire.

In DSA, there are members (democratic socialists) who insist that achieving socialism should be the goal, but there are also members who favour progressive regulation of corporations within the framework of capitalism as in Europe. “It’s an organisation that has attracted people with diverse opinions” (Professor Kazin), but they are united by a rejection of the current capitalist state of affairs. “In modern capitalism, you have to work just to survive. It’s about survival.” DSA member Juan Escalante (27) graduated from university in 2014. He went on to take an unpaid internship at a radio station for a year, but couldn't become a full-time employee, and had to eke out a living on his freelance job, which paid sporadically. He got a full-time job this fall, but repaying his student loan, at upwards of $100,000 (approximately 10 million yen) will be a heavy burden.

The economic wealth gap in the United States is serious. According to statistics of the US Federal Reserve (2018), the top 10 percent of wealthy people control 70 percent of total household assets. According to an estimate by US economist Pavlina R. Tcherneva, since 1982, despite a period of economic expansion, the bottom 90 percent of households have not seen income gains, which have all gone to the top 10 percent. Even as the economy has recovered since 2009, the bottom 90 percent has actually had a fall in income. For over 30 years, the richest have managed to concentrate even more wealth into their hands.

Dr. Lee Edwards of the US Conservative Think tank Heritage Foundation says, “The American people are pragmatic. Does socialism really work? You should think about the failure of socialism in such countries as India”.

However, the young generation feels a serious desperation over their future prospects. Escalante's parents are first-generation immigrants from the Dominican Republic. They attended university in the US, found jobs, and bought a home in Florida. They achieved the "American Dream". But Escalante lives in a completely different world from his parents' generation. “In my parents’ day, the economy was still working. We need a mechanism to replace capitalism that allows us to live in a better world. I think it is socialism.”

The Western world, with the United States at its centre, has developed on the basis of capitalism along with liberal democratic values. The end of the Cold War was at the time regarded as the victory of these values. When the US political scientist Francis Fukuyama published his 1992 book “The End of History” declaring that humanity’s ideological struggle had been settled by the advent of liberal democracy, this got a global response. However, in an October 2018 interview with the British magazine, New Statesman, Mr. Fukuyama said that “I don’t think social ownership of production is going to work (except for public utilities). But if we’re talking about social redistribution programs to reduce disparities, then yes, I think not only can socialism come back, it ought to come back.

“Democracy is when the views of the people are reflected. Where is the democracy in a society that is dominated by the 1%?” At the time of the end of the Cold War, capitalism and democracy were thought to develop together. However, for the young people whom I interviewed in New York, home to Wall Street, the heart of financial system, they all felt that democracy has been taken away from capitalism.

In the United States, the interests of large corporations and wealthy donors are easily reflected in policies through lobbying. Economist Robert Reich, who served as the Labour Secretary for the Clinton administration (1993-2001), wrote a book, Saving Capitalism, which talks about big pharmaceutical companies hiking drug prices, and massive subsidies for Wall Street. He points out that, “As income and wealth are concentrated at the top level, political power is shifted there." He argues that the threat facing capitalism was the weakening of public “trust” toward the system.

In the 80s, during the final stage of the Cold War, the Reagan administration pursued a policy of “Neoliberalism”, which eliminated many regulations and increased the wealth disparity. That trend has not lost momentum, and the youth are already beyond the limits of their patience.

However, I do not think socialism really works. In the Cold-War era, the socialist system oppressed people and robbed them of their liberties. How to bring back democracy to the capitalist system? That is the question before us.