We received this interesting letter which gives an insight into the situation that has emerged in Vietnam since it adopted so-called “market reforms”, with extremes of poverty side by side with immense wealth.

For the first two and a half weeks of this year, I was fortunate enough to spend time in central and northern Vietnam. I visited Hue, Da Nang, Hoi An and surrounding rural areas on motorbike. I also took an airplane from Da Nang to Hanoi. My intent was not only to take in the various attractions Vietnam offered, but also to see how the average person lived. 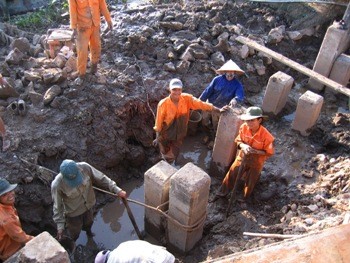 Building workers in Vietnam are often forced to live in makeshift shelters and tents. Photo by bruceandrobyn on Flickr.

I started my journey in central Vietnam. In Da Nang especially, but also Hue and Hoi An, development was evident. In the north it was a similar story. In Hanoi the famous Hoa Lo Prison (Hanoi Hilton) was largely torn down to make way for expensive high-rise buildings. Only a small portion remains as a museum. Urban areas were full of advertisement marked fences protecting plots of land soon to become office buildings, and tents for workers were littered around the edges of any construction already in progress. I was told workers are shipped in from other areas of the country so they wouldn’t be bothered by friends and family while they work. The miniature shanty towns they lived in were built out of tarps with what looked to be wood benches inside. Proper sanitation was often not provided, as one neighbor to a recent development project complained, rats had infested his home due to its proximity to the workers’ makeshift living areas.

Still, even under the conditions described above, many workers considered themselves lucky to have such a job. The global economic situation has caused foreign investment to slow, and it isn’t certain when, if ever, building will begin on the undeveloped land. Add high inflation to uncertainty (at some times last year inflation reached well over twenty percent), and many are quite worried about what the future holds.

This, of course, is in the context of the global crisis of capitalism. For years, ever since Vietnam “opened up” to market “reforms,” their economy has been steadily growing and they have been praised by the west. They even joined the World Trade Organization in early 2007. This so-called “market economy under state control in a socialist direction” has no doubt made some rich. Along the South China Sea there were exclusive resorts with sports cars and SUVs lining the parking lots. I didn’t, however, have to go far to see a fishing village that was running out of shore. Right across the street from the resorts men carried massive loads of fish with a bicycle that had been rigged to double as a wheelbarrow while their wives fought a losing battle trying to sweep dirt out of homes that offered little enclosure from the outside elements. People, usually foreigners or local businessmen, could no doubt spend a fisherman’s entire yearly income during an extravagant weekend on the beach. This glaring disparity was impossible not to notice. 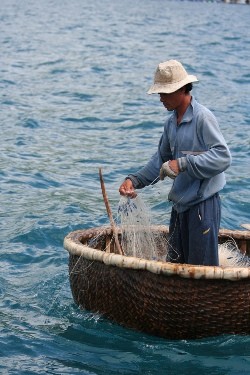 Foreigners or local businessmen could no doubt spend a fisherman’s entire yearly income during one extravagant weekend. Photo by maurice koop on Flickr.

The average person in Vietnam is stuck with the effects of these “reforms.” Many people, while retaining an impressive positive attitude and generous hospitality, have little faith in the governing bureaucracy to make things better. Several small shops specialize in making photocopies, as any document issued by the government needs to be copied several times to guard against incompetent, and corrupt, officials. The line separating capitalist from “communist,” regardless of how superficial it already was, is being erased.

After decades of disastrous wars that killed millions and effectively destroyed the economy, the bureaucracy was able to start rebuilding Vietnam. Unfortunately for the people, like all Stalinist attempts at a bureaucratic “socialism in one country,” it is inefficient, corrupt, and anti-democratic. As predicated, despite the official “communist” rhetoric, they ended up implementing market “reforms” in order to keep power. The solution, advocated by people like Lenin and Trotsky and despised by the bureaucratic caste, is internationalism and democratic workers’ control of industry. Ultimately, despite the heroic anti-imperialism, Vietnam offers another example of the need for Stalinism to finally be swept into the dustbin of history.