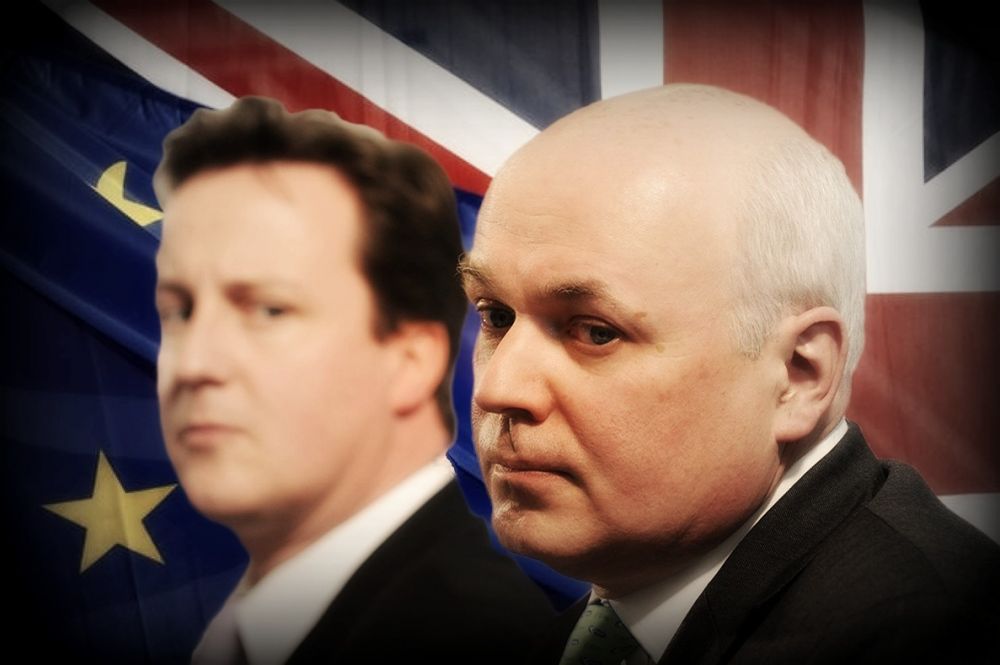 The resignation of Ian Duncan Smith as Work and Pensions secretary represents the clearest example yet of the growing divisions emerging inside the Tory party. Duncan Smith, or IDS as he likes to be known as, was no disgruntled minor minister but a senior member of the Tory government cabinet and a former leader of the party.

Now, as the EU referendum draws closer, the infighting within the Tories – with Cameron and Osborne on one side, and Boris, IDS, and Gove on the other – will only increase. The gloves are off and the knives are out.

The nominal reason given for his resignation was opposition to the recently announced budget cuts to welfare for the disabled (PIP). But, as a key architect of the Tories’ austerity programme, nobody believes the ex-head of the DWP’s excuses. As the Prime Minister himself responded, Duncan Smith is just as responsible for these cuts as the rest of the cabinet – indeed, more so.

In reality, these crocodile tears over cuts are just a fig leaf to hide IDS’ real motivation: to undermine Cameron and strengthen the Brexit camp within the Tories. These latest cuts were just the straw which broke IDS’s back.

The Financial Times has correctly called this resignation “the biggest challenge to David Cameron’s authority since he became prime minister – aimed at his Achilles heel, his perceived indifference to those most affected by austerity – and it will raise the stakes for the upcoming referendum.”

According to the Guardian newspaper, IDS had been looking “for weeks…for any excuse to resign” and talked of his attitude towards the EU vote as being “aggressive”. IDS had already attack the Cabinet Office report on the risks of leaving the EU as being “dodgy dossiers”, a reference to Tony Blair’s fiddling of the evidence used to justify the invasion of Iraq.

A cut too far

Cameron and the government loyalists have been quick to brief journalists that IDS has gone because of bad feeling over Europe. However, IDS’s statement in his sharply written resignation letter to Cameron – in which he claims that the latest round of cuts was “a compromise too far” – has some basis in reality. The cuts to benefits for the disabled has already attracted much opposition from inside the Tory ranks at Westminster. The fact that the benefit cuts were being undertaken at the same time as tax cuts for the rich has not gone unnoticed by anyone.

Senior Tory figures were quick to recognise the scale of any potential revolt, which would not need to be large given the small size of the Tory majority, with talk of “consultation” and “review” – i.e. preparing the ground for a possible retreat. Minister Nicky Morgan was already calling the cut just “a suggestion”. However, any prepared back out was already too late for IDS – the bile could no longer be washed away.

In truth, there was already a basis for such declared opposition, even before the budget cuts were announced. Although Cameron and Osborne make the cuts, it is individual ministers (along with local councils) who have to indentify and implement them. It is they who end up taking the blame in government for the results. After six years of cut after cut, many Tories have become frustrated at where things are going. Osborne promised them (and us) that things were getting better last year, but there is no end in sight to epoch of austerity.

With his latest Budget, the Chancellor changed his mind in the face of reality and announced that things were now getting worse, leaving him open to attack. As The Guardian put it, quoting Tory insiders, if there was a “dartboard in parliament, George Osborne’s face would be on it.”

These Tories have been confronted with the unavoidable truth that under the logic of the capitalist system there is no alternative to austerity in order to maintain the status quo. The divisions over Europe, which exist both in Westminster and within the Tory Party at large, has just made things worse, as the anger now has another and – for the Tories – more familiar focal point.

We should not feel sympathy for IDS or any of the other Tories now feeling the heat over the relentless regime of austerity cuts. After the Second World War it was established at the Nuremburg Trials that “I was only obeying orders” was no longer a valid excuse for war crimes. So it is with the cuts and attacks on working class conditions. All the Tories have, albeit sometimes reluctantly and with a bit of moaning, gone along with the annual process of cutting budgets and identifying services and jobs to go. Some were even cheerful about it.

IDS was no different. As the Guardian editorial rightly says: “Cuts that Mr Duncan Smith has signed off have produced a food bank boom, left tenants less secure and impoverished children simply for being born into larger families. Previously rare punishment ‘sanctions’ became common. People were left penniless for weeks on end.”  So much for his “compassionate Conservatism”.

It should be also be noted that the growing opposing to these cuts has strengthened Jeremy Corbyn’s position, made in the budget debate, that these cuts were being made to fund tax cuts for the rich. They have also undermined the position of the Blairites clique who have been busy briefing one and all on the need for “fiscal responsibly” etc., claiming that the Labour front bench doesn’t know what they are talking about. Clearly they do!

It has been claimed that Cameron was already looking to find a way to get rid of IDS because of his position and the threat to his authority. Well, for Cameron and the Tories things will not now get better, only worse. As the economy continues to deteriorate, and the hatred and division over Europe builds up, so the fissures inside the government and inside the whole establishment will get wider and wider. As the FT puts it, “The fight between Mr Duncan Smith and Mr Osborne is going to be an unremorseful battle – one that risks tearing the party in two.”

Other senior Tories will become more vocal, looking for points of attack against both Cameron and Osborne. Boris Johnson, who before IDS was the most vocal Brexiter, will not keep quiet. The knives are out now, and scores – old and new – will be settled. The Tory mantra that “power is everything” (echoed ironically by the Blairites) will be tested as never before. No wonder the capitalist class and the establishment are now very worried. They require a stable and strong party to carry out the austerity that the system requires; and yet the Tories are tearing themselves to pieces. This looks like the last years of the Major government, only much much worse.

For Corbyn and Labour the task should be clear. Go on the offensive over this crisis in the Tory party and the rottenness of the system they defend.

The only solution to the economic chaos now confronting Osborne and society at large is to boot out capitalism. This requires Labour to stand in support of a clear socialist programme, based around the nationalisation of the monopolies, banks and finance houses –with no compensation for these rich parasites who have benefited at our expense – under workers’ control and management, as part of a socialist plan of production.

Reverse all cuts; bring in a real living wage; provide a fully funded and free health service; for free education – grants not loans; abolish Trident; support council housing – no to homelessness: these demands, amongst others, would gain clear support amongst workers and youth, desperate for an escape from the misery of a capitalist world in crisis.

No doubt the establishment would cry “this is nothing short of a revolution” – and they would be right, because that is what is now needed. As a recent slogan on a badge worn by Black Lives Matter activists in the US rightly put it: “Revolution – back by popular demand!”