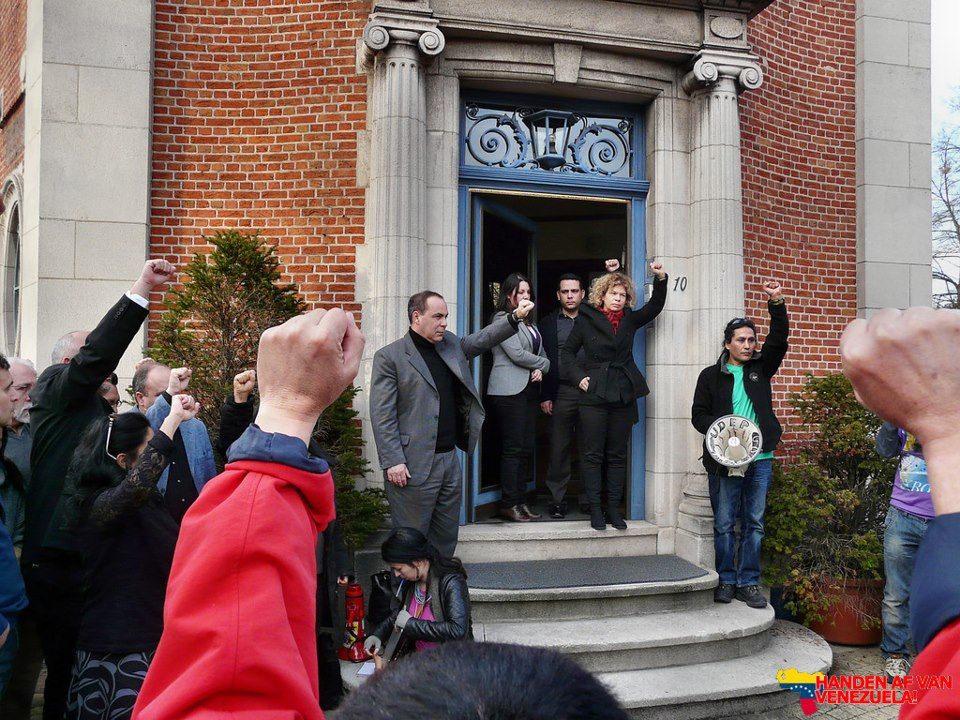 ‘Companero Hugo Chavez! Presente! Ahora y siempre!’ Overwhelmed by emotion but determined to continue the struggle. This is how you can summarize the mood amongst the two hundred people in front of the Venezuelan embassy in Brussels. A few minutes after hearing the tragic news of the death of Hugo Chavez, the Hands Off Venezuela campaign called for a vigil in front of the embassy the following day.

Other solidarity organisations supported the initiative like Arlac, Intal, Iniciativa Cuba Socialista, Comac. Many other people and groups also took up the appeal via the social media. Trade unionists were also present.  All were moved not only by the feeling of grief and sadness but also by anger and determination. There was a strong awareness of us having lost a historic revolutionary leader. But the future of the revolution was on everyone’s mind.

A Latin-American activist of Arlac said that the only way to save the revolution was to ‘profundizar la revolucion’ meaning breaking with capitalism. The comrade of Hands Off Venezuela stressed that the best homage to Hugo Chavez was to carry through the revolution to its very end and struggle for socialism in our own country also. Others denounced the lies of the media covering the death of the president. Above all Hugo Chavez and the Bolivarian revolution is an example of struggle we must emulate here and now.

The ambassador Antonio Garcia joined the gathering with the full staff of the embassy.  He gave a strong emotional speech and asked all of us present to continue the struggle. The vigil ended with a minute of silence and clenched fists.  Another, more political, homage to Hugo Chavez will be held next Tuesday 12th of March in Brussels from 6.30pm in the meeting hall of the CSC union (Rue Pletincks, 19) at the initiative of Hands Off Venezuela and other groups.