The campaign, which was set up three years ago at the time of the bosses’ economic sabotage, has expanded enormously over the last few years and is now active in over 30 countries in five continents. In Britain, HOV has been particularly successful in mobilising support in the trade unions. It organised interventions in practically every national trade union conference, culminating in the unanimous adoption of a resolution in support of the Venezuelan revolution at the congress of the TUC. 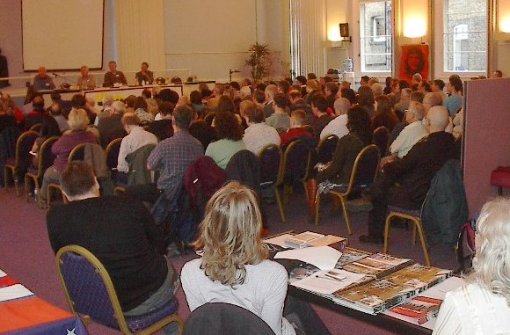 The conference was held on the eve of the important legislative elections in Venezuela (on which it passed a resolution). It was attended by people from all over Britain. The majority were activists in the British labour and trade union movement, although there was also a large number of youth and students. Among those unions that sent delegates were branches of Unison, Amicus, National Union of Journalists, Transport and General, the rail unions, RMT and Aslef, as well as Community, Natfhe, and the FBU.

On the platform were a number of key figures in the British labour and trade union movement: Tony Benn, the veteran leader of the Labour Party Left, and the Labour members of parliament, John McDonnell and Jeremy Corbyn, leaders of the left wing Campaign Group of Labour MPs; Alan Woods, editor of Socialist Appeal and founder of Hands Off Venezuela’s international campaign; Jeremy Dear, general secretary of the National Union of Journalists; Maire Daley of the national executive of NATFHE and Ruth Winters, the national President of the Firefighters’ union, FBU. The Conference also heard greetings from the Venezuelan Ambassador, Alfredo Toro Hardy, who greeted the marvellous work of the Hands Off Venezuela campaign in winning the support of the British trade union movement.

In his opening remarks the chairperson, John McDonnell, made it clear that Venezuela was moving towards a socialist revolution. “In the past the Left organized solidarity campaigns after a defeat, as in Chile. Now, for once, we are organizing a campaign to prevent the defeat of the Venezuelan Revolution”, he said. “This is a great opportunity for us all. The threats are great. The international labour movement must stand shoulder to shoulder with this revolutionary movement.” He continued, “This is a potential socialist revolution, not simply a democratic revolution, which we need to promote and develop.” John appealed to everyone present to carry the news of this meeting to every part of the labour movement and every part of the country.

Tony Benn opened the debate attacking the USA for its attempts to dominate Latin America, referring to the Monroe Doctrine and the theory of “Manifest Destiny”. He reminded the Conference that, despite its supposed support for democracy, the USA had supported the most brutal dictatorships in Latin and Central America in order to defend the profits of the big multinational companies. “The United States seems very strong, but in reality it is very weak. Its imperialist adventure in Iraq and elsewhere has made it the most unpopular country in the world.” He praised the democratic character of the Venezuelan Revolution, which is a source of tremendous inspiration to the entire world: “When I get up in the morning feeling a bit depressed about the state of the world, I think about Venezuela and feel a new confidence.”

Alan Woods, who spoke next, pointed out the contradiction that in a period where the productive forces, science and technique were sufficiently developed to solve all the problems of humanity, eight million men, women and children die each year because they do not have enough money to live.

“After the collapse of the Soviet Union the supporters of capitalism imagined that socialism and revolution were off the agenda. But the Venezuelan revolution is the final answer to all this”, he said.

Alan pointed out that in order to be the President of the USA one had to be a billionaire, whereas Venezuela had the most democratic constitution in the world and President Chavez had won more democratic elections and constitutions than any other leader. Yet the enemies of the Revolution claim it is “undemocratic” and have invented a new term “elected autocracy”.

“We must ask ourselves what the effects of a defeat in Venezuela would be. It would isolate Cuba and place it in grave danger, it would deal a serious blow to the morale of the masses who are fighting to liberate themselves throughout Latin America, it would encourage the reactionaries to intensify their offensive against socialism on a world scale, and it would dishearten the labour movement internationally.”

He warmly welcomed the declarations of Hugo Chavez in favour of socialism and called on all present to defend the Venezuelan Revolution, while at the same time fighting for socialism. Finally, he reminded the delegates of Simon Bolivar’s inspiring dream of a united Latin America. “This vision remains correct and necessary, but it can only be achieved when the working class takes power into its hands and unites in the Socialist United States of Latin America, the first step towards a Socialist World.”

After the speeches there was a free, open and democratic debate in which all kinds of different opinions were expressed. Several speakers commented favourably on the complete lack of sectarianism and totally democratic way in which the Conference was run. Andy Higginbottom of the Colombia Solidarity Campaign made this point, contrasting the conduct of Hands Off Venezuela with other solidarity movements that are conducted in a narrow sectarian spirit. Andy also stressed that in order to achieve socialism, whether in Venezuela or in Britain it was essential to take on the power of the big multinational corporations. 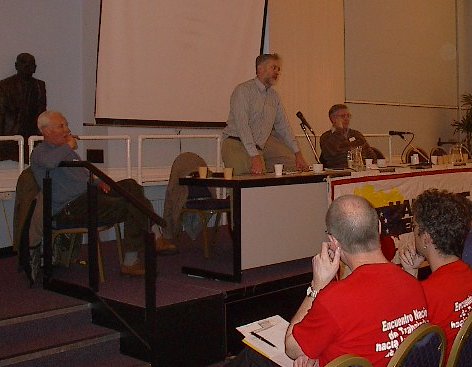 Jeremy Corbyn speaking from the platform

Speaking from the platform, Labour MP Jeremy Corbyn asked why the media was silent on Venezuela. The reason is that they would be compelled to report good news! “I now feel more optimistic about Latin America than for many years”, he said. In the past we had a series of defeats, like the murder of Allende in Chile or the defeat of the Sandinistas in Nicaragua. He condemned the British government for backing military dictatorships in Latin America.

He went on to recall the counterrevolutionary role of the USA in the invasion of Grenada and the destabilization of the PP government in Jamaica by the CIA. “The invasion of Grenada was justified on the basis that it was a threat to the United States. Tiny Grenada could not be a threat to itself, let alone the United States!” he remarked, to the laughter of many. Jeremy said that the Cuban revolution had given hope to the people of Latin America, and that it was vital to support Venezuela.

Jeremy went on to refer to the revolutionary developments in the continent, not just in Bolivia and Argentina but also in Mexico, where he anticipated that Fox would be defeated in next year’s elections and replaced by Lopez Obrador. This would mean a left government on the very doorstep of the USA.

The highlight of the Conference was a lengthy and impassioned speech by Ruben Linares, a national coordinator of the UNT, the main Venezuelan trade union. Ruben gave a detailed history of the Bolivarian Revolution, including an account of the counterrevolutionary coup that was defeated by the masses in April 2002, and the bosses’ economic sabotage of 2002-3. The latter, he explained, was defeated by the intervention of the working class, which moved to take over the oil installations and operate them under workers’ control. 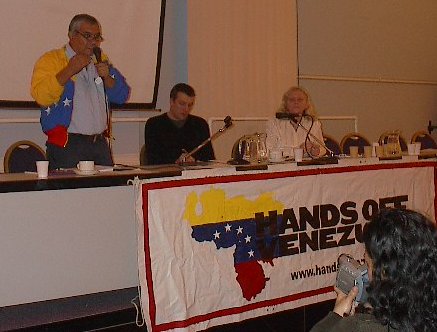 Ruben Linares, leader of the UNT

One of the most moving statements of speech came when Ruben said: “The workers do not need the bosses to run industry. They can run it themselves. And we did just that.” This statement was met with enthusiastic applause.

He then went on to describe the movement for workers’ control. He reported that in a meeting called to discuss factory occupations in Latin America “grown men, hardened by everyday work in the factory, wept like little children” when they visited factories that were run by the workers. “In Argentina and Brazil, when we occupy the factories the authorities send the police to repress us. Here the government discusses how to resolve the problem.”

Ruben Linares was followed by Maire Daley of Natfhe who welcomed the opportunity to talk about Venezuela in the trade union movement. Ruth Winters of the FBU also made an impassioned speech in favour of promoting solidarity with the Venezuelan Revolution. “This issue has allowed us to raise the idea of ‘revolution’ on the conference floor of the TUC. We have a lot to learn from the Venezuelan experience. The experience of revolution is not too far away. After all, every strike is a mini revolution in reality”, she said.

A trade unionist from Sinaltrainal in Columbia, Euripides Yance, representing the Food and Drink industry, denounced the murder of Columbian trade unionists and specifically pointed the finger at big multinational companies like Coca Cola.

After a very rich and lively discussion, which was always friendly and comradely, the Conference unanimously approved a basic constitution and elected a steering committee to run the campaign for the next twelve months. Some amendments to expand the committee and see how best local groups can be represented nationally were also approved.

The Conference was an outstanding success, particularly in view of the constant attempts to sabotage it by splitting tactics. The calling of a rival meeting on the same day by another organisation caused a very bad impression. It caused angry comments by several delegates who demanded an end to the intrigues and manoeuvres aimed at splitting the solidarity movement. Jeremy Dear, who chaired the afternoon session, assured conference that measures would be hopefully taken to ensure such things do not happen in the future.

Finally, after a very good financial collection, the Conference unanimously passed a resolution condemning the attempt of the Venezuelan Opposition to sabotage the legislative elections by boycotting the polls.

Jeremy Dear summed up the enthusiasm of the conference by pointing to the large number of delegates who spoke in the different sessions, bringing their experiences and different points of view. The task now was to turn out and build the campaign in every union, college, university and workplace.

Once again, Ruben Linares was asked to say a few words to conclude the conference. He quoted the words of Che Guevara: “Let the ones who are born know, and let the ones who are yet born also know, revolutionaries are born to fight and we fight to win, not to be defeated”. This again brought the entire conference to its feet as a salute to the Venezuelan revolution and its success. 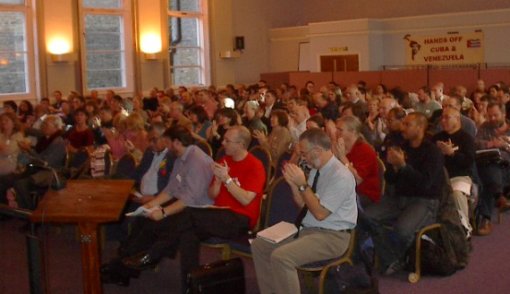 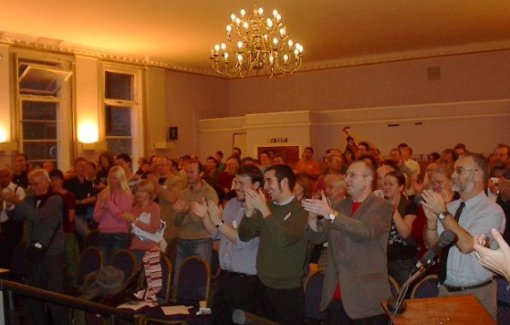