On April 12th, around 70 people gathered at a Hands Off Venezuela meeting at Bolivar Hall in London to commemorate the 10 year anniversary of the defeat of the counter-revolutionary coup against Hugo Chavez, President of Venezuela. The meeting served as the premiere of ‘Cuarto Poder’, a documentary summarising the negative portrayal of the President Chavez in the Spanish media and the reasons for this negative bias.

The screening of the documentary was followed by analysis John McDonnell MP and HOV honorary president of the campaign, Alan Woods, founder of HOV and Samuel Moncada the Venezuela Ambassador to the UK.

The documentary very effectively shows the influence of the Spanish media. It started by showing passers-by in an urban Spanish street taking part in a random select survey where they are quizzed on their opinion of the validity of available media, their knowledge of state leaders’ names and then their opinions of Hugo Chavez. Opinions on available media tended to be cynical, knowledge of state leaders varied but in all cases, Hugo Chavez was named as the Venezuelan President (even when Sarkozy, Cameron or Berlusconi could not be named) and the attitude of those interviewed ranged from ridicule to hostility.

It went on to interview a large group of professionals on the private ownership of media outlets, its use to miss-inform and of blatant lies to the Spanish public. It goes on to show not only the influence of the state propaganda in the media but also that of private companies. Since 2002 the Spanish media outlets have increased by approximately 200 new outlets as the ownership of these has decreased by 35%. These companies vary from insurance/banks to oil giants and weapon manufacturers who then use the media influence the public view in their favour.

The analysis of the media’s portrayal of Chavez was first carried out by John McDonnell MP who spoke of the use of the media as propaganda weapon against the Bolivarian revolution. Rupert Murdoch’s involvement in this was emphasised, in his oppression of his employee’s roles as free press journalists. Union membership within Murdoch’s empire has been aggressively discouraged with the formation of staff associations set up to assure that journalists tow the “Murdoch line”. It was also mentioned that around 250 journalists throughout the world a year are murdered mostly due to their commitment to honesty and free press that tragically for them had not served in favour of the more ruthless and corrupt bourgeois. 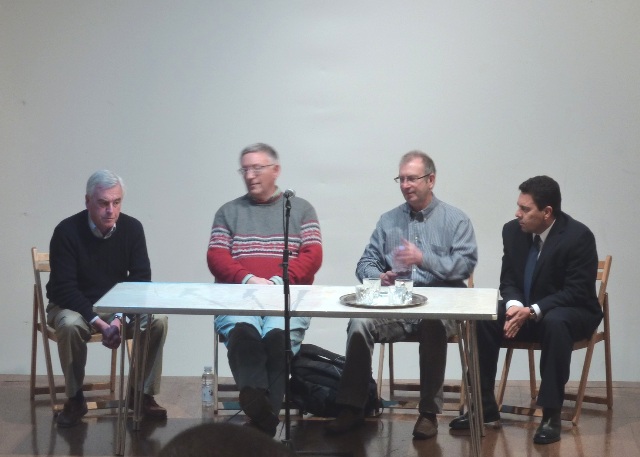 A personal account of the coup was then given by Samuel Moncada, the current Venezuelan Ambassador to the UK who at the time had an important cabinet position in the Venezuelan government. Within this analysis, he talked of the foreign support for the overthrow of the democratically elected Chavez and the replacement with someone more aligned with the ideological views of European and American imperialists. Foreign financial support has been high for the private sector media in Venezuela. Last year alone, $50 million was invested in this and 80% of Venezuelan media is still privately owned, with the overwhelming majority of it firmly opposed to Chavez. It was made very clear that the global bourgeoisie would happily overthrow a democratically elected government that went against their economic interests to be replaced by a dictator that they could easy control.

Alan Woods then gave a vivid summary of the history leading up to the coup and the coup itself. Within this he described the vital role of the masses of working class Venezuelans in defeating the coup. “These events are unprecedented in the history of Latin America, he said.”They show that there is a power in society that is greater than any state, army or police force: the power of the working class once it is mobilised to change society”.

Answering the hypocritical propaganda of the western media, he pointed out that if any British television station had repeatedly called for the government to be overthrown by a coup and the prime minister assassinated, “they would be closed down and sent to jail before you could say ‘Rupert Murdoch’”. Yet when the Bolivarian government finally took action against RCTV this was described as an “attack on press freedom.”

Alan praised the achievements of the Bolivarian Revolution but stressed that the only way to defend its gains against the counterrevolution was by liquidating the economic power of the oligarchy, expropriating the land, banks and big companies. While emphasising the need to step up the solidarity campaign in the run-up to the October elections, he ended with the following message: the best way to defend the Venezuelan Revolution was to fight for socialism in Britain.

The meeting ran well over its appointed finishing time due to the discussion and questions asked by the audience who were clearly very interested in the past, present and future of the Venezuelan Revolution and in the on-going struggle. We left with a very clear view of how the media is being used as a weapon by the ruling class to deceive the working masses, and with a determination to step up the campaign in defence of the Venezuelan Revolution and to fight for socialism.