In the run up to the December 8 municipal elections the campaign of speculation, hoarding, profiteering, overpricing and sabotage of the economy has intensified. The Venezuelan government of President Maduro has denounced that there is a “slow motion coup” being implemented. The year on year inflation rate has reached 74% and the scarcity index is at a record level of 22%. 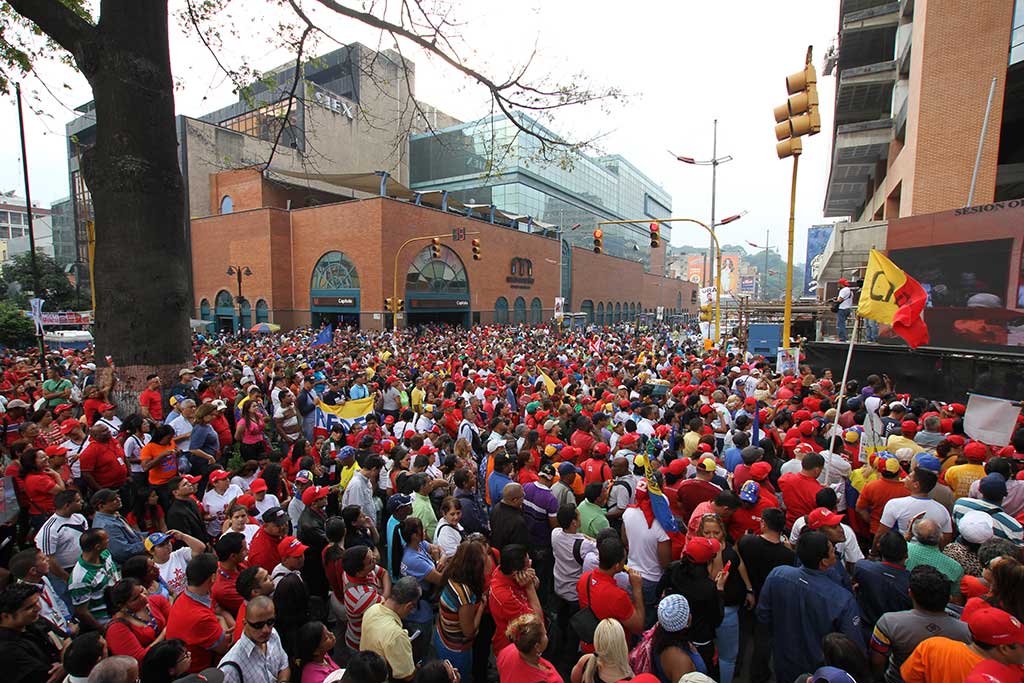 People celebrating enabling lawIn the last few days the Bolivarian government has taken a series of measures to check on the prices at which a wide range of goods are being sold and forced businesses to adjust their prices. In many cases government inspectors found overpricing of 1,000% or more. Businesses import goods with dollars they receive from the government at regulated prices and then mark them up for sale at prices calculated on the basis of the black market exchange rate. The government has denounced this as robbery against the consumers.

The government has also taken measures to fight against hoarding, discovering, once again, warehouses full of goods (from food to electronics) which are scarce in the shops. Once seized, they have been sold at regular prices.

Dozens of businessmen have been arrested pending trial as a result of these actions.

These measures have been received with enthusiasm by the Venezuelan people as they have made products available at normal prices.

President Maduro requested an Enabling Law which will allow him to take a series of measures to fight what he described as an “economic war” being waged by the “parasitical bourgeoisie against the working people”. The Enabling Law has now been passed by the National Assembly. Maduro said that this will be used to create a “new economic order in transition towards socialism”.

This campaign of economic sabotage and disorganisation started more than a year ago, coinciding with the illness of President Chávez. It intensified after the death of Hugo Chávez and in the campaign for the April 14 presidential election.

As we know, immediately after their defeat in the presidential election, the opposition launched a violent campaign of destabilisation, including drive-by shootings of Bolivarian activists, health clinics, etc. They refused to recognise the result of that election and attempted, once again, to remove the Bolivarian government by force.

Now the main opposition candidate Henrique Capriles has made public threats against president Maduro by saying “after December 8, we are going after you and your government”.

The long hand of Washington is never very far when it comes to attacks against the Bolivarian revolution. Documents recently leaked by Snowden and published by the New York Times reveal how Venezuelan and the impact of the Bolivarian revolution in Latin America are one of 6 “enduring targets” for spying by the United States. Investigative journalist Eva Golinger has also revealed a document detailing joint efforts to destabilise the country by organisations based in the US and Colombia together with the Venezuelan opposition.

The international Hands off Venezuela solidarity campaign would like to alert the labour and student movement, solidarity activists and progressive public opinion in general about these facts. They represent a renewed threat against the democratic will of the Venezuelan people on the part of the oligarchy, and, behind it, imperialism.

The Venezuelan people are again facing a crucial battle. The December 8 municipal elections will not just be a normal electoral contest, but a major clash between the revolution (which has the democratic support of the majority of the Venezuelan people) and the counter-revolution.

We stand firmly with the Bolivarian people and the government of Maduro against the parasitical oligarchy, and support all necessary measures taken to fight the economic war. We are vigilant and we will mobilise against any attempted coup on the part of the oligarchy.