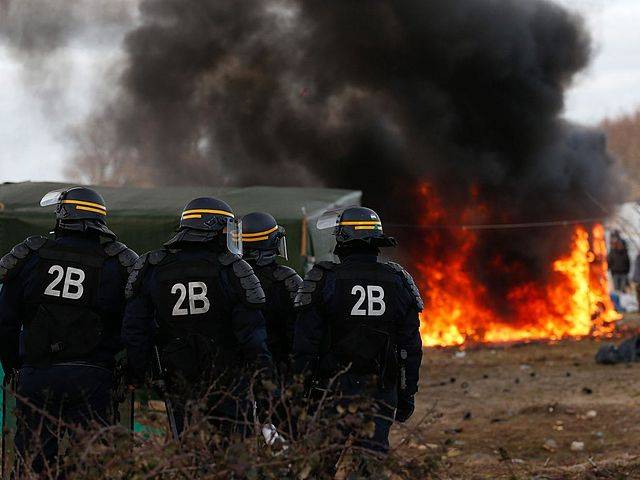 On Wednesday 2nd November the last inhabitants of the so-called Calais “Jungle” were moved from the site, drawing the operation to demolish the refugee camp to a close. The camp itself has been reduced to a pile of rubble and ash. The thousands of men, women and children who had endured its unimaginable squalor in the desperate hope of a better life now face the prospect of further fear, indignity, and suffering, including deportation if their applications for asylum are unsuccessful.

This will come as a relief to the French president, Francois Hollande, who had vowed to dismantle the camp “completely, definitively” last month. But beyond the bravado, this gesture has achieved absolutely nothing. It has done nothing for the refugees themselves, who have simply been tossed into even more unfamiliar and hostile surroundings; it has done nothing to quell the baying of the racists in politics and the press; and, importantly, it has done nothing to stem the tide of desperate people, fleeing countries which have been torn apart by crisis and war - the very thing which created the “jungle” in the first place.

A brief look at the history of the Calais jungle and its predecessors shows the futility of Hollande’s latest move. Refugees, mostly Afghans fleeing the Taliban and Kurds who had escaped Iraq in the aftermath of the Gulf War, first started arriving in Calais in the late 1990’s. The first “jungle” appeared in 2002, after the then Minister of the Interior and future French President, Nicholas Sarkozy (another ‘strong man’), announced the “definitive closure” of the first refugee camp, set up in 1999. Since then, Calais has borne witness to the the same infernal cycle of police raids and demolitions, followed by new arrivals and the creation of new camps.

As more countries in Africa and the Middle East were plunged into chaos, the more the camp grew in size and notoriety. In the space of one year, between October 2014 and October 2015, its population trebled from roughly 2,000 to 6,000. Last month, the charity, Help Refugees, put the total number of people living in the camp at 8,143. The conditions inside the camp have been well documented: the hunger; the lack of proper running water; the lack of clothing (especially shoes); the infections caused by so many people crammed together so close to open sewage. The so-called “New Jungle”, which up until last week housed roughly 1,500, was described as “the largest slum in Europe, and probably the worst” by one local charity worker.

No humanitarian aid was provided by the authorities. On the contrary, extra funds were provided for the mobilisation of over 1,000 armoured ‘CRS’ riot police, affectionately nicknamed “CRS - SS” by French workers, after Hitler’s death squads, for their bigotry and brutality. The UN, along with the large, respectable NGOs, tended to steer clear of the camp, presumably undesirous of a quarrel with the French state. The only aid which made it into the camp came from local charities, groups of overstretched volunteers and well-meaning but misguided “voluntourists” who would drive to the camps with cars laden with often useless items like teddy bears, high-heeled boots and old satin dresses.

The camp was knowingly left to become a stinking ghetto under the noses of the entire international community. The reason was simple: deterrence. It was clearly hoped that by taking a such a callous stance on the camp, the authorities would deter people from even attempting to cross the Channel from Calais. However, it is not so easy to deter someone who has already travelled thousands of miles and endured unimaginable ordeals just to reach this point.

Hollande, the “Socialist” President, then took up the mantle of his conservative predecessor, Sarkozy, and set about yet another “definitive” clearance of the Calais camp. For over a week the shambolic operation dragged on, as thousands were piled onto buses heading to undisclosed destinations while fires swept through the camp, destroying what meager possessions the inhabitants had managed to preserve.

Even after French authorities announced that the clearance had been completed, as many as 1,500 unaccompanied minors were still left in the camp, sleeping in storage containers, surrounded by circling gangs of racist thugs. They were transported out of this nightmare on 2nd November, a full week after the operation was supposedly “completed”. It is expected that hundreds of children may have gone missing during the clearance, having decided to try and make it on their own, been picked up by traffickers, or worse.

Meanwhile, a new camp has already emerged in Paris, near its Stalingrad Metro stop, and yet more riot police have been sent in to clear the site by force. Again, this will solve nothing. In fact, far from solving the problem, the dispersal of the Calais jungle has simply spread it around the country.

The conduct of the British state has been equally shameful. Sitting on the other side of the Channel, May’s government (and Cameron’s before that) was happy to watch from afar with its arms folded. According to the BBC, the UK has taken in about 270 children from the camp so far. That’s 270 out of over 8,000 people, despite the introduction of the “Dubs amendment”, intended to facilitate the transport of vulnerable children to the UK. Meanwhile £1.9 million has already been invested into the construction of a new 1km long wall around Calais port - another pointless PR stunt which will do nothing to deter those desperate enough to try and crawl into the undercarriage of a lorry.

Both the French and British governments are trying to shift responsibility onto each other’s shoulders, playing a diplomatic game with human lives as bargaining chips. That two nations with a combined GDP of over $5 trillion cannot accept a few thousand refugees is disgustingly absurd. And yet it fits perfectly into the logic of the crisis.

Both the British and French establishment, especially the media, have whipped up and pandered to a reactionary hysteria over migrants in order cover their cuts and falls in living standards at home and their imperialist adventures abroad. Now, faced with the inevitable product of this policy, all they do is stall in the hope that either side will give in, or the refugees just stop coming, which is extremely unlikely.

Under capitalism, the lives of all human beings are simply collateral. No more clearer can this be seen than in the stories of those who lived in the Calais jungle. In an article entitled, The horror of the Calais jungle refugee camp: ‘We feel like we are dying slowly’, the Guardian published the story of Karzan, a nurse from Iraq in his thirties.Two months ago he left his home in Kirkuk, along with his wife, baby son and brother-in-law after “Daesh (Isis) told him that if he didn’t agree to work as a nurse for their fighters, they would kill him”.

Had he refused and stayed he would likely be seen as a martyr in the fight against Daesh which our leaders so admire, if his death was reported at all. Had he agreed to serve Daesh then he may well have ended up on the receiving end of one of the many bombs and shells dropped on Iraq and Syria for that very purpose. If he and his family had perished in transit they may have inspired sympathetic headlines, but simply by surviving and trying to come to Britain to work in one of our hospitals, they have become nothing more than an inconvenience, if the attitude of Hollande and May is anything to go by. The truth is that to the great democracies of the West, Karzan and the thousands like him are surplus to requirements - worth more dead than alive.

The very existence of the Calais jungle is a monument to the hypocrisy of our system. It is no coincidence that at the same time that Bush and Blair were trying to build a land in their own glorious image in Afghanistan and Iraq, a weeping wound had opened only 20 miles from the Dover coast. Nor is it a coincidence that years later, people who have been forced to flee the wreckage left by those wars are coming to the same place. Like the picture of Dorian Gray in Oscar Wilde’s novel, the Calais jungle was and is the reflection of the real face of imperialism, which gets uglier and uglier with every intervention in the name of “democracy”.

The tragedy of the Calais jungle and the “migrant crisis” as a whole is that it need not happen. We can house these people - there are an estimated 22,000 properties left vacant in London alone. Likewise, there is plenty of work to be done in Britain and a lack of qualified people to do it thanks to decades of mismanagement in education, health and construction. The only barrier to helping these people - all of them, not just a lucky few - is a system which puts profit before people and uses the innocent as scapegoats for its own crimes.

Beyond our own shores, we must end the imperialist meddling and exploitation which has created a hell on Earth, from which thousands risk drowning in the Mediterranean in order to escape. This, just like our policy at home, starts with us. It is simply not good enough for our MPs to make pleas to “save the children” whilst supporting the same wars that orphaned them and left them stranded in the Calais jungle.

The only war which can end this nightmare is a war against capitalism: against the corporations who make billions from the grinding poverty of the ‘Third World’; against the imperialist states and their allies who turn whole countries into their slaughterhouse; and against the politicians like May and Hollande, who use the suffering of thousands for their own cynical ends.This is a battle we must fight and must win, not only for the sake of refugees, but for our own as well.