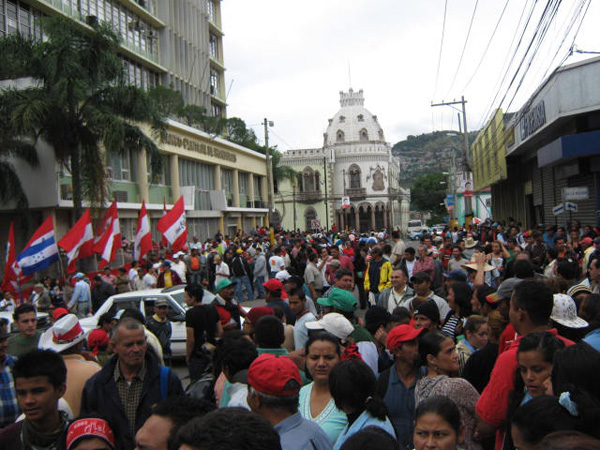 In a previous article we pointed to the fact that the Tegucigalpa/San José Accord signed on October 30 was a farce. Events have now confirmed that we were right. To accept the agreement now would be a betrayal of the mass movement. What is required now is an active boycott, combined with mass mobilisation for the overthrow of the present illegitimate regime.

As we explained in a previous article, the Tegucigalpa/San José Accord signed on October 30 by representatives of the legitimate president of Honduras, Mel Zelaya, and those of the coup regime of Micheletti, was in reality a farce.

The text of the agreement was already quite bad (even though it was presented as a victory by Mel Zelaya and some of the leaders of the Resistance), but at least it contained one clause which talked of the reinstatement of president Zelaya, who had been removed by a military coup on June 28. However, in reality, the oligarchy had no intention of implementing that point and very soon started more trickery.

As we already warned, the text of the agreement left the question of Zelaya’s reinstatement to the National Congress which could also consult the Supreme Court of Justice. This was clearly a trap, since both Congress and the Supreme Court had given “legitimacy” to the coup in June. As a matter of fact the presidency of the Congress (which is not in session now because of the elections called for November 29) decided to consult the Supreme Court and other bodies, thus delaying the decision on Zelaya. Meanwhile, coup president Micheletti decided to get his government to resign… and then appoint the same people again to the National Unity and Reconciliation government which included no representatives from Zelaya. The farce was complete. To this date the Supreme Court has not yet responded to the report requested by Congress.

But none of this could have worked, or at least could not have had any shred of legitimacy, had it not been for the position of the US, which made it clear that regardless of the decision of Congress on the issue of Zelaya being reinstated, they would recognise the November 29 elections. 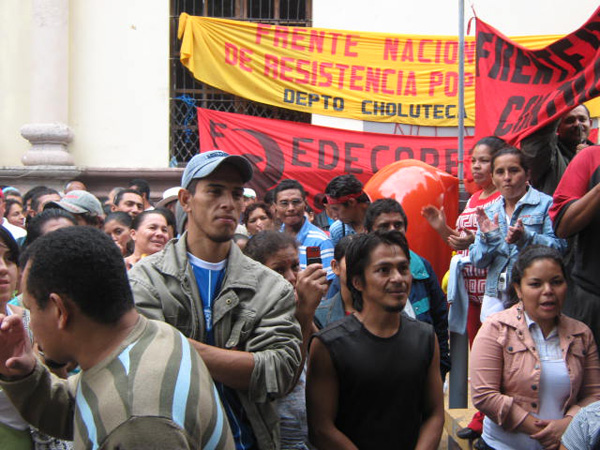 Demonstration on November 5, 2009. In a very interesting article written by Tomás Andino, one of the leading figures of the Resistance and member of parliament for the left-wing Democratic Unification party (UD), he put it clearly: “The Tegucigalpa agreement, far from being a 'victory', means the surrender of President Zelaya. The agreement has been written on the terms of the empire. It is a pity that Mel swallowed the hook, and authorised the signature of the agreement… The question is that even though he has signed, the empire has made it clear that they will accept 'any decision taken by the Honduran Congress', which means that it is likely that they will not accept the reinstatement before the electoral farce of November 29, to prevent damaging it.”

Faced with this situation, the National Resistance Front has decided to boycott the elections on November 29. Trade union candidate Carlos H. Reyes, after consulting the rank and file of his organisation, decided to make a clear statement withdrawing from the elections and calling for boycott. A number of candidates from other parties (Liberal, PINU and others) have also decided to withdraw from the elections.

The situation with the left-wing Unificación Democrática, however, is a bit more complicated. The leadership of the party is divided in two wings. One, the official wing, led by Cesar Ham, has an openly opportunistic stance, arguing that they have to stay in the electoral process in order to keep their electoral registration. There is also the issue of the 4 million lempiras in state political funding that they would lose if they were to boycott the election. This is clearly a position of betrayal of the resistance movement. Members and activists of UD have participated actively in the resistance movement and at least 6 of their members have been killed for their part in the movement. The Cesar Ham wing of UD are clearly treacherous opportunists, more worried about their jobs and money than about the principles they claim to stand for. 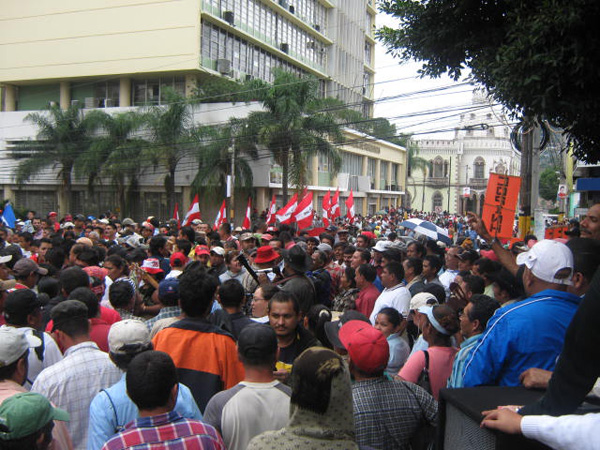 Demonstration on November 5, 2009. There is another wing of UD, led by Renan Valdez and Tomás Andino, amongst others, who call themselves the Genuine Leadership of UD, which has come out clearly against the elections and for boycott. They have made an appeal to the rank and file of UD to prevent the party from supporting the electoral farce. They argue, correctly, that: “to participate in the fraudulent elections would contribute to give legitimacy to the coup regime and will create more difficult conditions for the defeat of the new government, which would mean that UD would become its accomplice”.

We could say that the negotiations and the so-called agreement have played the role they were intended to: create confusion in the resistance movement and give some degree of “legitimacy” to the elections called by the coup regime. Washington has already said that they will recognise the result of the elections as legitimate. That wing of the US state apparatus that was always supportive of the coup has won, against those who, even though they shared the aims of the coup, did not necessarily agree with the methods used.

Now at least the situation has become clear to the mass movement: the only way to defeat the coup is through mass mobilisations, not through negotiations. As Tomás Andino puts it correctly: “The only thing that can save the situation is for the Peoples’ Resistance to break the ice, first of all refusing to recognise the Tegucigalpa Agreement and mobilising to prevent the electoral farce of the oligarchy on November 29… In this way we would prevent the agreement from fulfilling one of its main aims which is to legitimise the coup through elections, and only in this way we would have conditions for a defeat of the coup regime in the medium term and achieve the aim of our struggle: the Constituent Assembly.”

This is a very similar perspective to what we put forward on October 28: “In order to move forward and continue the struggle it needs to start by clearly rejecting negotiations with the regime and then move to organise a serious campaign against the November 29 elections. The elections should be boycotted across the board because they are called by an illegitimate regime in conditions of brutal repression. This boycott should be organised through a massive campaign of political explanation in the neighbourhoods, building up to mass demonstrations and a meticulously-prepared general strike.” (see Honduras: repression and negotiation defuse the resistance movement)

As we said then: “The courageous movement of the Honduran masses over the last four months has not been in vain. It has created powerful organisational structures and links between the active layer and the masses. The mass movement has had a taste of its own power and strength. Above all, the level of consciousness has experienced a giant leap. None of this will be wasted, no matter what happens in the next few weeks. None of the fundamental problems facing the Honduran masses have been resolved, and they cannot be resolved within the limits of capitalism, so there is no alternative but to continue the struggle. It is necessary to group the most advanced activists of the movement into an organisation based on the ideas of Marxism. Within the movement of the Honduran workers, the Marxists will fight to give the marvellous energy of the revolutionary struggle of the masses a far-sighted and decisive leadership that can take it to victory.”