International Marxist Tendency
Share
Tweet
We provide this report of the book launch meeting of Lal Khan’s book Kashmir’s Ordeal – A Revolutionary Way Out. At the peak of the meeting nearly 1000 people were present, who had come to hear Alan Woods and Lal Khan speak on the question of Kashmir. As one comrade said afterwards, the meeting will turn out to be an important turning point and milestone in the struggle for a socialist Kashmir. Picture gallery available. 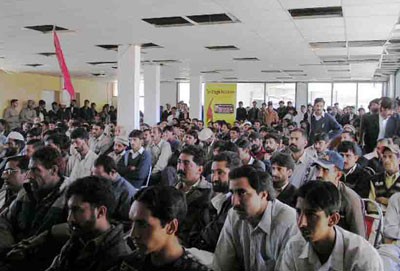 On 29th March 2006, the comrades of the Jammu Kashmir Revolutionary Youth Alliance organized a public meeting to inaugurate comrade Lal Khan’s latest book Kashmir’s Ordeal—A revolutionary way out. From Lahore five of us embarked upon the journey to Kashmir, together with comrade Alan Woods, the chief guest at the book launch. His works are widely read amongst the Kashmiri and are very popular, especially with the youth.

We had crossed the bridge on river Jhelum that divides Pakistan from Kashmir and were driving along the hairpin curves of the foothills of the Himalayas, when a caravan of several vehicles hoisting red flags with the hammer and sickle inscribed on them sped down the mountains in the opposite direction. They were coming to meet us and to give us a revolutionary welcome to Kashmir. We stopped and came down from our van to meet the comrades, who were chanting revolutionary slogans. Then the little revolutionary caravan proceeded on its way. 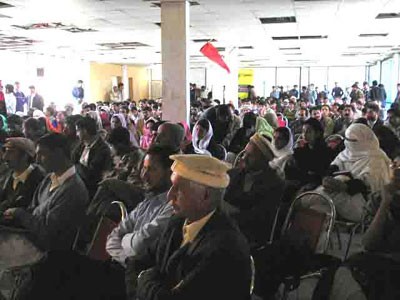 Upon arrival at Rawala Kot, one of the largest and most central cities of Pakistani-controlled Kashmir, we had long discussions late into the night. The Kashmiri comrades gave us detailed reports of how they had organized the rescue and relief operations in the aftermath of the devastating earthquake last autumn. They explained how they turned the sorrow and grief of the comrades into anger against the system and instilled a fighting spirit in them. This high morale proved to be the decisive factor in the execution of a most impressive operation. They also explained how this campaign was politicized by the comrades and a movement was launched to force the state to distribute the relief goods to the most deserving and destitute victims of the tragedy.

In the morning of the 29th of March people started to reach Rawala Kot from different areas of Kashmir to attend the book launching ceremony. The meeting started at 11.30 am. The largest hall in Rawala Kot was packed to capacity. People had to stand in the alleys as there were not enough chairs. At the peak of the meeting there were nearly one thousand people present in the hall. This was the biggest Marxist meeting ever held in Kashmir. 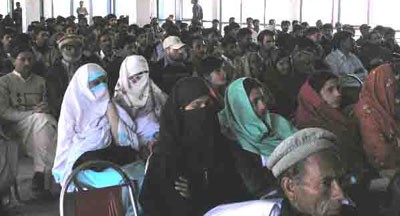 The people in the audience were from every stratum of the Kashmiri people: workers, peasants, lawyers, doctors, students and women. There were 36 women and girls present, which is a high figure considering the conservative family traditions of Kashmir. Some of the girls wore veils, as can be seen from the photographs.

The proceedings were chaired by comrade Javed Chaudhry, a leading PPP activist from Hajira, an important town in Kashmir. The first speaker was comrade Shujaat Kazmi, form Muzaffarabad, the capital of Pakistani-controlled Kashmir. He is the former president of the JKNSF (Jammu Kashmir National Student Federation) and is one of the most popular mass leaders of the Kashmiri youth at the present time. 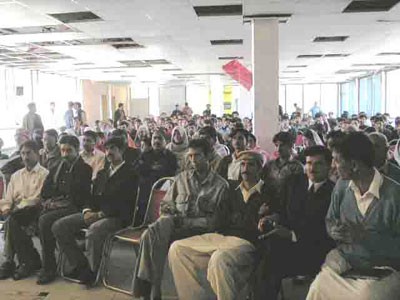 Shujaat Kazmi said that this is the first book that analyzes the situation of Kashmir and gives a perspective for the solution of this problem from the viewpoint of the oppressed masses. He said this book is a guideline and a clear strategy for the new generation of Kashmir youth for a revolutionary way out from the tyranny and misery that the oppressed of Kashmir have suffered for countless generations.

As comrade Alan Woods rose to speak he was given a standing ovation. Comrade Woods, who wrote the introduction to this book, said that he has come to Kashmir for two reasons: to inaugurate the book and to express the solidarity and support of the European and world proletariat with the victims of the earthquake and the toilers of Kashmir. He said that this was his first visit to Kashmir and he was deeply moved by the natural beauty of the region:

“This ought to be a paradise on earth but the ruling classes of the Subcontinent and the capitalist system have turned it into a living hell for millions,” he affirmed. He said that there is no solution on the basis of war: “Four wars have been waged and yet nothing was solved. More than eighty thousand young Kashmiris have lost their lives in this conflict and yet nothing has changed or improved for the masses”. 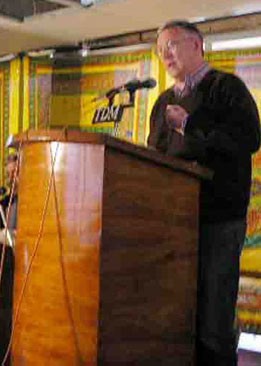 Alan stressed that there are lots of lessons that can be learnt from the struggle of the last sixty years. “The most important lesson is that the ruling classes of India and Pakistan will not and cannot solve the Kashmir issue. This can only be achieved by a revolutionary overthrow of these bourgeois states and the overthrow of the exploitative capitalist system”.

On the tragedy of the earthquake he pointed out that the devastation was not as much from the natural disaster as from the bad infrastructure and cheaply built dwellings due to the intense poverty in Kashmir. Alan said that the rotten capitalist system was more responsible for hundreds of thousands of deaths of innocent people than the wrath of God or an accident of nature:

“Some say this is a punishment by God against the people for their sins. But why should God punish only the poor and defenceless people? Is it only the poor who are wicked and not the rich?” he asked.

He said that the devastation of the earthquake and failure of the relief operation by the bourgeois state has exposed the ruling elite and there is a burning resentment towards the present system. This can end up in a mass explosion that could set up a revolutionary fire that will spread across the whole of the South Asian Subcontinent. Kashmir can gain a genuine independence with the formation of the Socialist Federation of the Indian Subcontinent, he affirmed.

The next speaker was Comrade Zia Qamar, the president of the Peoples’ Student’s Federation (PSF the student wing of PPP) of Kashmir. He said that comrade Lal Kahn had spent several years in educating and developing comrades in Kashmir and now they have become the largest revolutionary force of youth in Kashmir. By writing this book comrade Lal Khan has given a clear strategy for the revolutionary struggle of the Kashmiri masses.

Comrade Manzoor Ahmed, Member of the National Assembly of Pakistan and President of the PTUDC, traveled to Rawala Kot on the morning of 29th March to attend the launching ceremony. In his speech comrade Manzoor said that this is perhaps the first work that traces the history of the struggle in Kashmir and proves that the class question was always dominant in this struggle for centuries. He said that the Pakistani regime had miserably failed in the rescue and relief operation and now it was diverting the attention of the masses by raising other non-issues to perpetuate its rule. He said that thousands of lives could have been saved had there been an efficient rescue operation. But this state is so rotten that it spends billions on armaments and yet it is incapable of organizing an effective rescue and relief operation. Comrade Manzoor concluded his speech by saying that this book was an important weapon in the fight for the liberation of Kashmir.

Comrade Adil Khan, the former General Secretary of the JKNSF and the present convener of the Jammu Kashmir Revolutionary Youth Alliance, spoke of the ongoing revolutionary struggle of the Kashmiri Youth. He pointed to the dedication of the book which says “To the new generation of the Kashmiri youth who in the most atrocious conditions are in the forefront of the struggle for Revolutionary Socialism”. He said that the nationalists and fundamentalists have failed. Now the Marxists are on the verge of becoming a mass revolutionary force in Kashmir. 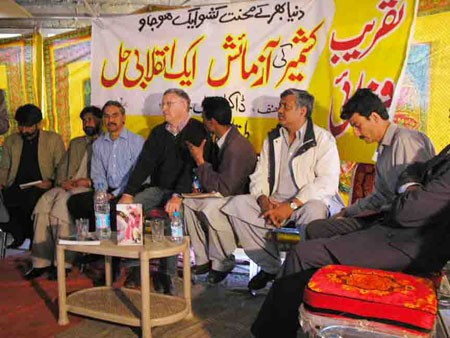 Several other important political leaders from Kashmir also spoke at the meeting. They included:

All the speakers paid glowing tributes to this book, which they recommended to the youth who want to fight against tyranny and oppression, and wish to change society for the liberation of the Kashmiri masses.

Lastly, comrade Lal Khan, replying to the discussion saying that it was the revolutionary fervour of the Kashmiri youth that inspired him to embark upon this work. He said that the only way the liberation of Kashmir could be achieved is through the formation of a revolutionary Socialist Republic of Kashmir. The oppression of the Indian and Pakistani states can only be ended by their revolutionary overthrow through a class war of the working classes of the whole Subcontinent. Hence it is necessary to link the struggle for the national liberation in Kashmir to the class struggle across the region and beyond.

Lal Khan said that the revolutionary zeal and struggle of Kashmiri youth is a source of inspiration for the youth and workers of the whole Subcontinent. A revolutionary victory in Kashmir could be the beginning of the Socialist Revolution in India and Pakistan. “My main aim of writing Kashmir’s Ordeal was to lay a solid ideological foundation and to work out a strategy for carrying out a successful socialist revolution in Kashmir and beyond”, the author concluded. 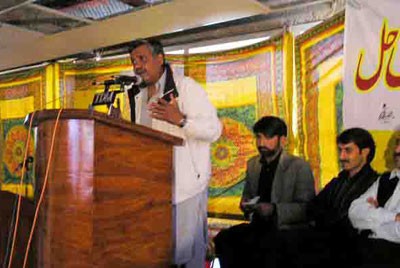 After his speech Lal Khan received a standing ovation and the hall was filled with revolutionary slogans and songs. The meeting ended with enormous enthusiasm and euphoria amongst the participants. A young comrade commented after the function that this meeting would prove to be a turning point and a decisive milestone in the struggle for a Socialist Kashmir. It would be an important landmark when the history of the revolution in Kashmir is written.

PS. Today (Thursday, March 30) we have been informed that groups of revolutionary youth, up to 300 strong, have been parading through the streets of Rawala Kot with red flags, chanting slogans like: Revolution! Revolution! Socialist Revolution! They have been warmly received by the population, with shopkeepers leaving their shops to cheer them on. The meeting has already shown itself to be a success. Things are changing fast in Kashmir.