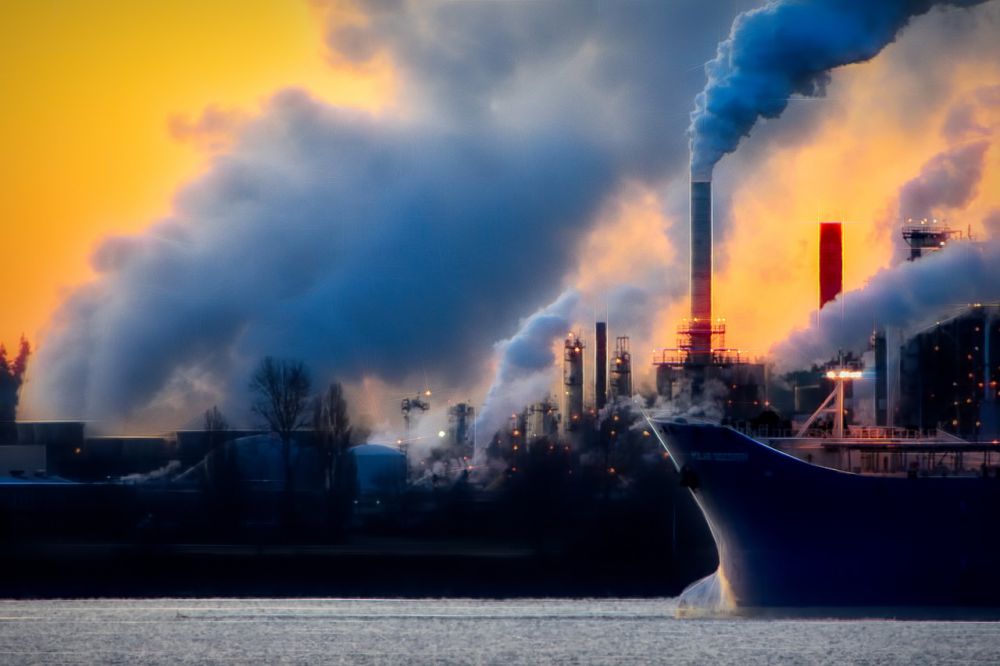 Dramatic climate change in recent years has led scientists to the conclusion that global warming is the cause. This is bad news for the private owners of the $2trn dollar oil, gas and natural gas industries. If serious action were taken to deal with global warming, their profits would be in trouble. That is why these big monopolies have spent millions on a campaign designed to rubbish the global warming theory.

In October Hurricane Wilma roared across the Caribbean, having roughed up Cuba, the Yucatan peninsula of Mexico and then headed straight for weary southern Florida, killing several people as it passed and making homeless (yet again) the poorest members of various Central American communities.

President George Bush's brother, Jeb, the governor of Florida, declared a state of emergency as Wilma headed towards him, the 21st tropical storm of this year's hurricane season. There have never been that many storms in any one year for over 60 years.

Something strange is going on. The heat is being turned up on the globe. Global warming is a reality. Not only was the 20th century the warmest century in the last 600 years, the 1990s had more record warm years than any other decade in that century.

According to measurements by NASA satellites, sea levels have been rising twice as quickly in the last ten years as they have at any other time in the 20th century. The earth's glaciers and icecaps are melting and the oceans are expanding as they get warmer. There is increasingly convincing evidence that heat-trapping carbon dioxide in the atmosphere is stopping heat radiating out into space.

Since the industrial revolution, carbon levels have risen from 280 parts per million, a figure steady for 10,000 years, to 380 parts, a level of emission not experienced for over 400,000 years.

One consequence of this is that tropical storms have become 50% more intense over the past 30 years. While global warming does not increase the number of storms, it makes them stronger to reach hurricane levels, because surface temperatures rise and warmer water fuels the storms.

When Hurricane Katrina hit south Florida, it was a category 1 storm with speeds of 70 miles an hour. When it moved across the Gulf of Mexico, temperatures rose and Katrina became a Category 5 with winds of 170 miles an hour.

If the deaths in New Orleans, in Guatemala and in south Asia are a result of stronger hurricanes and tides caused by global warming, then these disasters are not "god-given" but man-made. The huge emissions of carbon and other pollutants are a product of uncontrolled expansion of industry and mining by capitalism globally.

The big multinationals want to expand without restriction or regulation. And they fight bitterly any campaign to protect people who work in their factories, mines and refineries, or those who have to live nearby or are affected by their pollutants. These "externalities" beyond their own private production for profit are not their affair and they don't want to take responsibility or to pay for them.

Indeed, there has been a massive campaign by the big global companies to deny that there is any global warming problem. They argue that any increase in global temperatures is really just the normal cycle of cooling and heating seen over thousands of years in the great ice ages. So there is no man-made problem that requires action.

The evidence remains against the sceptics. There is now a mountain of studies showing that the current pattern of warming is distinctively different from 'natural' warming and is very specifically a pattern of 'greenhouse' warming. The National Climatic Data Center in the US recently found that at night time, minimum temperatures, on average, are rising twice as fast as daytime average temperatures. That suggests a carbon emission effect; otherwise daytime and nighttime averages would rise in parallel. According to a definitive study in 1996, the warming in the last century was 15% due to the sunspot cycle and 85% due to greenhouse gases.

This is bad news for the private owners of the oil, gas and natural gas industries. In the US, they generate $2trn dollars in revenue. And if global warming became accepted and action was taken to deal with it, their profits would be in trouble. These big monopolies have reacted by setting up a campaign organisation designed to rubbish the global warming theory.

They have employed scientists to refute the arguments. In 1995, a public utility hearing found that the coal industry had paid four scientists $1m to present evidence against global warming, while Exxon, the world's biggest oil company had spent $13m on a campaign against it.

In particular, they made a video that argued that global warming was good for people because carbon dioxide would promote plant growth and help feed the world. The problem with this argument is that in hotter climes, higher temperatures kill more plants than carbon dioxide helps. Just a half a degree rise in temperature in Southeast Asia will reduce rice and wheat yields by 20%.

Nevertheless, this video was very popular in the White House where great brains like George Bush watched it and accepted the arguments. This US administration is so much part of the oil and energy capitalist clique that it has been very ready to dismiss the arguments of global warming and instead reduce what environmental controls there are.

The first acts of Bush when he came into office (after fixing the vote with his pals on the Supreme Court) was to announce that the US would not ratify the Kyoto agreement which set international targets for reducing carbon emissions; and second, to allow oil and gas drilling in the untouched wastes of the Alaskan Artic and also in America's wildernesses of the their national parks.

When the Environmental Protection Agency listed the potential dangers of climate change in its major report, the White House ordered the EPA to remove or alter all references to global warming. The report had taken four years to prepare and covered all the research from 2000 scientists from 100 countries reporting to the UN, but Bush called it a "frivolous product of bureaucracy".

One of the leading neo-conservatives in the Bush administration has been Paul Wolfowitz. He was very keen on “regime change” and the war against Iraq. Recently, Bush got him the job as head of the World Bank, the organisation that capitalism set up to “help” poor countries develop and get out of poverty. Wolfowitz declared that the World Bank would take climate change seriously. What was his answer? To expand coal production and technology! Coal mining is not only very dangerous to the workers who mine it in difficult conditions under the whip of unscrupulous companies. It is also one of the biggest contributors to carbon emissions.

No wonder that, when Hurricane Katrina hit New Orleans, a government that denies global warming, that is opposed to environmental protection, that is opposed to state spending (except on arms and making war), was totally unprepared for what happened.

We now know that for years the US Army Corp of Engineers (the government body responsible for these matters) had warned that New Orleans could not stand anything more than a relatively weak hurricane. Ten years ago, an intense rainstorm killed six people in the city. The Corps asked Congress to provide $430m to shore up the levees (dams) to protect the city. The Corps was ignored.

Last year, the Army Corps reckoned that spending on the levees was 20% below what was needed and yet the now notorious Federal Emergency Management Agency reckoned as early as 2001 that the flooding of New Orleans was one of three most likely disasters. Instead, last year the Bush administration cut funding to New Orleans for flood protection by 80%!

At the same time, the Louisiana state congress asked the federal government for $14bn over several years to strengthen dikes and levees along the Gulf coast. They were given just $570m. Damage after Katrina is now estimated conservatively at $100bn.

We now know how badly the administration handled the New Orleans disaster that killed so many, made thousands permanently homeless and just left the working poor (mainly black) to their fate.

As one observer put it: "the administration just walked away. The police and their guns and nightsticks were out in full force, not arresting criminals but pushing around the innocent and giving mostly bad instructions. The 10,000 people who had been corralled into the Superdome were essentially under house arrest from the police who were keeping them there, preventing them from even getting fresh air. As the food and water ran out, people were dying and sanitary conditions were becoming disastrous. So somebody had the idea of shipping all these people, Soviet-like, to Houston to live in the Astrodome, as if they were not people, but cattle. After they were gone, the looting began with criminal gangs stealing everything these people owned as the police looked on (when they weren't joining in)!"

Back in Houston at a fundraising event, George Bush's mother-in-law and head of the Bush clan made a speech with the leaders of the other wing of the ruling political class present, Bill and Hilary Clinton. Barbara Bush blurted out the real thoughts of the ruling class on the poorest people of New Orleans who suffered the most from their horrible negligence: "So many of the people in the arena there were underprivileged anyway, so going to Houston is working very well for them".

No, instead Bush has announced more deregulation and worse conditions for the very people who have suffered from the hurricanes and may suffer from Wilma too. The administration has dropped rules requiring companies to hire black, women and disabled workers. It has dropped pollution controls on higher sulphur fuel to alleviate shortages of petrol. It has allowed federal agencies to award contracts without any bidding procedures.

Most importantly, it has suspended the minimum wage laws in the four states affected by Katrina, thus cutting incomes to the very poorest looking for work. And this is after refusing to raise the minimum wage level throughout the period of the Bush government, making the level the lowest in real terms since it was introduced.

The heat is on. But the ruling class stays air-conditioned in their luxury homes and gas-guzzling limousines. The working people of New Orleans and the homeless of the islands of the Caribbean remain in an ever hotter abyss as yet another hurricane heads their way.