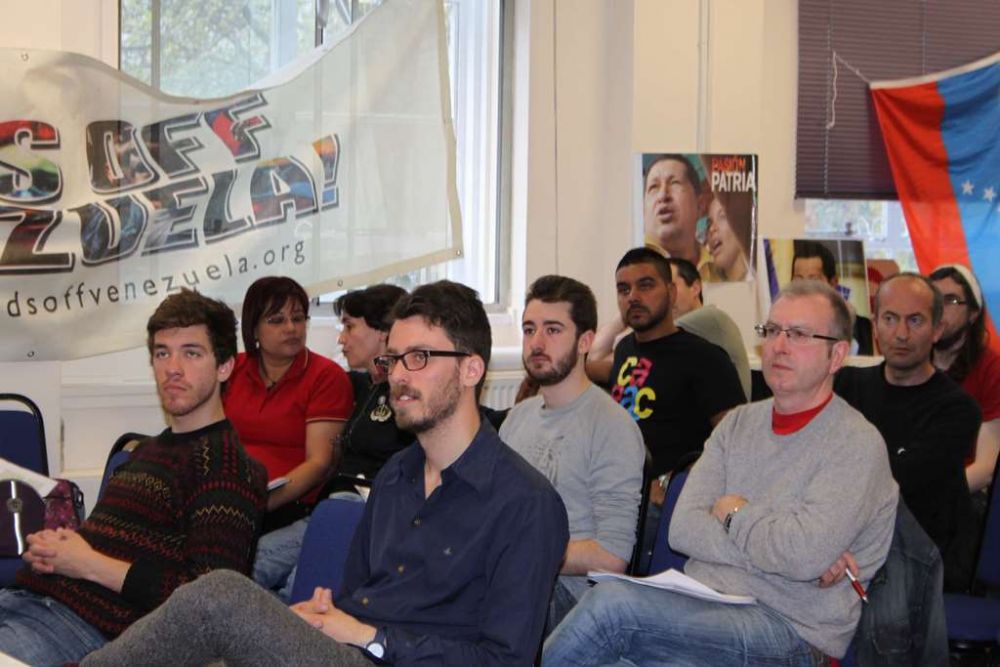 Over 50 activists, trade unionists, youth and Latin American activists, met in London on May 4 to discuss about the legacy of Hugo Chávez and the challenges facing the Bolivarian revolution. The meeting reaffirmed our rejection of the opposition claims of electoral fraud and renewed our commitment to defend the democratically expressed will of the Venezuelan people to elect Nicolás Maduro as president.

The meeting was opened by Darrall Cozens who asked the audience to observe a minute’s silence in homage to Hugo Chávez. 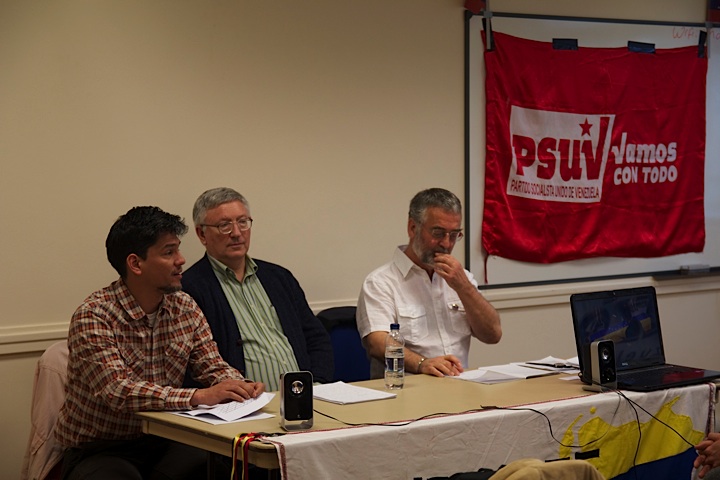 The first speaker was Yaruma Rodriguez, cultural attaché to the embassy of the Bolivarian Republic of Venezuela in the UK, who brought greetings and apologies from Ambassador Samuel Moncada who is currently in Venezuela. He started by describing the benefits to workers in the newly approved Labour Law. Yaruma also explained in detail the functioning of the Venezuelan electoral system in order to refute opposition allegations of fraud. He explained how voters have to identify themselves, their ID cards are checked against a picture database and then their fingerprints also checked. Voting is electronic but then each voter receives a paper receipt in order to confirm the vote which is put in a box. After the closing of the polling stations, 56% of all polling booths are chosen at random for an audit, which involves checking the machine registered vote against the paper receipts. This audit is public and takes place in front of witnesses from both the Bolivarian and the opposition campaigns. Furthermore, the actual voting system underwent a whole series of audits which were witnessed by opposition and socialist technicians. (Full text of his speech can be found here)

We then screened a number of short clips of Hugo Chavez. This included part of his BBC Hard Talk interview, when he stated that “there can be no democracy under capitalism, only in socialism can there be genuine democracy”; his statement at the Copenhagen climate summit that “socialism is the only way to save the world and you can only do it through revolution”; his rebuttal of “the stupid people of Fox News”, as well as his defence of socialism and thanks to the Hands Off Venezuela campaign during his visit to London.

This was followed by Alan Woods, founder of the Hands Off Venezuela campaign and a friend of Hugo Chávez, who spoke at length about the legacy of the late Venezuelan president and revolutionary leader. Mixing personal anecdotes with political analysis Alan described the crucial role which Chávez had played in the Bolivarian revolution. “There was a chemical reaction between the revolutionary masses and the president”, he said, “the fed on each other.” Alan described Chávez as a “corageous revolutionary leader” who stood “head and shoulders above most of the leaders of the Left in Europe.”

Coming from a military background, “he joined the Army so he would be able to play baseball”, he dared to challenge the power of the oligarchy and of imperialism.
Alan Woods explained some of the main achievements of the revolution, in the fields of health care, education, housing, etc. but also underlined that this was not even the main reason for the mass support for Chavez, which had to be found in a different factor: “Chavez gave voice to the poor, the working people, the dispossed, those who had never had a voice before”, said Alan explaining that this was the reason why millions turned out at his funeral.

Alan also stressed the role Chavez had played in bringing back the debate about socialism, describing how this was received with enthusiasm by the workers and peasants gathered at the Teresa Carreño Theatre, but with horror by many bureaucrats and careerists in the Bolivarian movement. The Bolivarian revolution can only be completed by expropriating the oligarchy, Alan underlined. 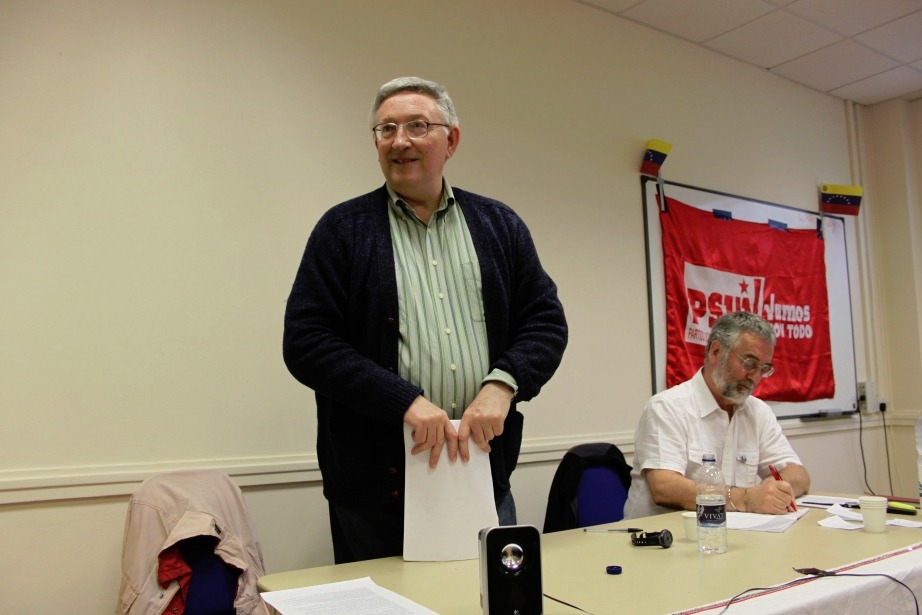 Describing an incident in which he had been invited to ride in the presidential car during the summit of non-aligned countries in Margarita Island, Alan explained how Chávez pointed at the waving crowds of Bolivarian supporters and said: “These are the people who must take control of this Revolution.” The fate of the revolution, which has not yet been completed, lies in the revolutionary masses, concluded Alan. This was followed by a lively discussion. Amongst those speaking was Alberto Durango, one of the leading activists of the campaign to organise cleaners in London, the majority of whom are Latin American immigrants, many of them without legal papers. In his reply Alan stressed something which Chávez always repeated: “the best way to defend the Venezuelan revolution is to fight for socialism in Britain!”

The afternoon session was centered on the report by Yenny Cortez, from the Gotcha occupied textile factory in Aragua, Venezuela, our guest speaker. She explained in detail the struggle of the women workers of Gotcha, starting from their immediate demands for full rights and benefits against the employer, their attempt to organise a union, and how this led them to occupy the premises and eventually to re-start production under workers’ control.

She explained how their struggle was part of a wider movement of occupied factories and the movement for workers’ control. “We have had to struggle not only against the old owners and for nationalization under workers’ control, but also against bureaucrats within the state institutions who are sabotaging workers’ control,” she said. The way forward is to create a “workers’ state, one which is controlled by the workers and peasants, to show the bureaucracy that we are fully prepared to take over the running of society and brush them aside.”

This was a moving speech which showed the transformation of ordinary working people in the process of the Venezuelan revolution. (You can watch her whole speech in this VIDEO in Spanish and English:

The next speaker was Jorge Martín who explained in detail the attempted coup carried out by the opposition after the April 14 elections. “The mass media have talked of ‘post-election violence’, but never mentioned that the 9 people killed were all Bolivarian, socialist supporters,” he said. He also went on to discuss why the election result had been so narrow. “In effect, between 600 and 700,000 people who voted for Chávez on October 7, 2012, then voted for the opposition candidate on April 14,” Jorge said, “and this is the result of the fact that the revolution has not been completed and the capitalists are continuing to sabotage the economy”. 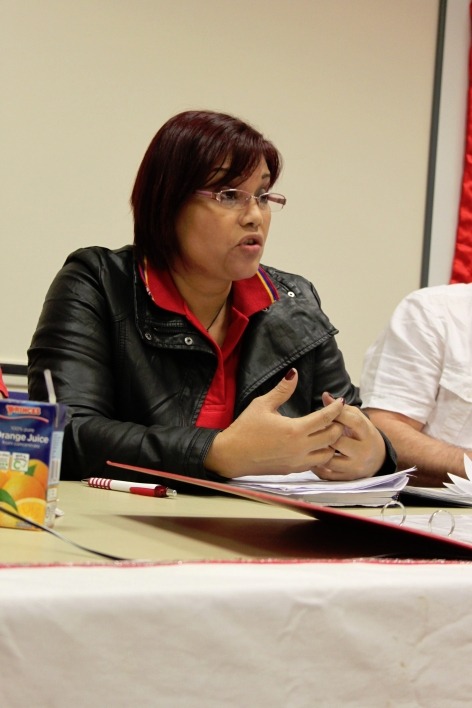 Jorge said that in his opinion there were three main challenges facing the Bolivarian revolution in the next period. One, that of the economy, which continued to be capitalist but was hampered by many regulations introduced by the government to alleviate the impact of capitalism on working people. “You cannot regulate the free market, if you attempt to do so you end up with sabotage, investment strike, flight of capital, hoarding and speculation,” he argued, “the solution is the expropriation of the means of production under workers’ control.” “In fact,” he explained, “it would be sufficient to expropriate the properties of those who signed the Carmona decree of the April 2002 coup, that would put an end to capitalism in Venezuela.” Second was the question of the state apparatus, which was still largely the old capitalist state. “This needs to be destroyed and replaced by new revolutionary institutions based on the workers’ councils and the communes, as it is stated in the election program Chávez stood on in October”. Finally there was the question of revolutionary organization and leadership, which was constantly suffocated by the bureaucracy within the Bolivarian movement.

A lively debate followed, which also dealt with the question of what can we do here in Britain to defend the Bolivarian revolution. There was a strong feeling that our campaign is not just about abstract solidarity with a far away country, but above all an activist movement fighting for revolutionary change in Britain as well. In this respect the policy of HOV of getting involved in the struggle against austerity cuts, the struggle of the cleaners for a living wage and linking up with other Latin American campaigns and groups in Britain was reaffirmed.

The resolutions were voted and amended, the financial report was approved and a new steering committee elected in the best democratic traditions of the revolutionary movement (see here for the full text of those).