The massive and militant demonstration that took place last Saturday, October 16, organised by the FIOM metalworkers’ union represents a clear turning point in the Italian political situation. October 16 shows the way. It is time to call a general strike. 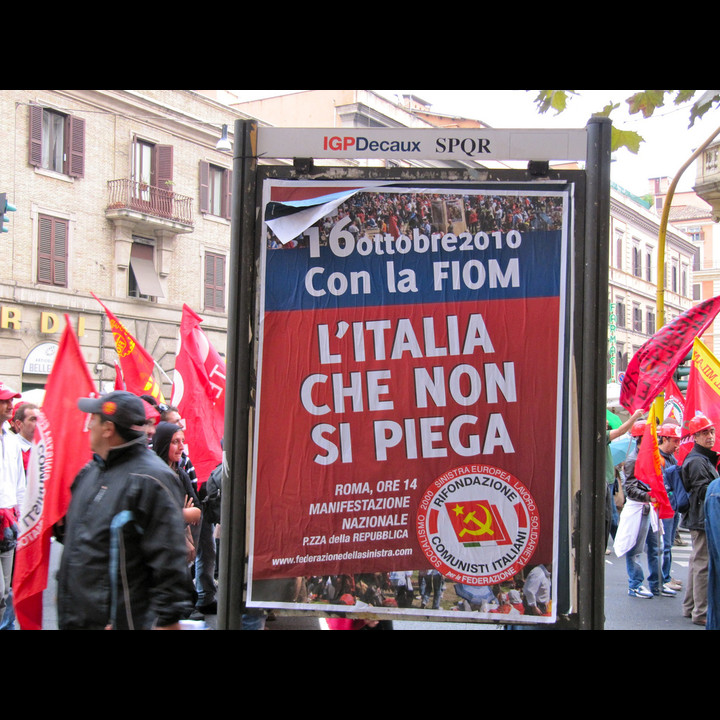 More than half a million workers and youth took to the streets of Rome from all over the country on Saturday. The demonstration was organised by the Fiom, the metal workers’ union, part of the Cgil (the main trade union confederation). This march was totally connected to the struggles that are shaking Europe, from Greece to France and Spain, against the austerity measures of the governments and the capitalists.

The demonstration had been called right after the referendum held in the Fiat plant at Pomigliano. In that referendum the Fiat management, helped by the pro-bosses union confederations Cisl and Uil, scored a victory that we described as “Pyrrhic” (see here). Against all the pressures and attempts to intimidate the workers, around 40% of the workforce (and almost 50% of the blue-collar workers) voted “No” to the bosses’ proposal (or rather blackmail).

Marchionne, the Fiat Group’s CEO is out to smash the unions completely. He wants to impose new rules on wages, work rhythms, shifts, sick pay, etc., turning back the clock to the 1950s. The plan was clear: once it was carried out in Fiat, this strategy would have been generalised and applied in all other factories throughout the country.

This is the reason why in September the Federmeccanica (the metal industry bosses’ association) unilaterally rescinded the collective labour agreement signed with the Fiom in 2008. Now they consider valid only the deal subsequently struck in 2009 with the Cisl and Uil, which the Cgil refused to sign. It goes without saying that the 2009 deal presents much worse conditions for the workers.

Since June there has been a systematic campaign in the mass media aimed at isolating the Fiom, portraying the metal workers’ union as a nest of troublemakers, violent hooligans, etc., in an attempt to intimidate the main organisation that has put up resistance in the last years to the plans of the government and the bosses.

The attitude of the main opposition party, the Democratic Party was to criticise the Fiom leadership for their “no” vote. The Cgil leaders took a similar position. So-called “public opinion” (i.e. the mass media, political parties represented in parliament, etc) was almost 100% solid against Fiom’s “irresponsible behaviour” and their “old-fashioned” model of trade union relations. 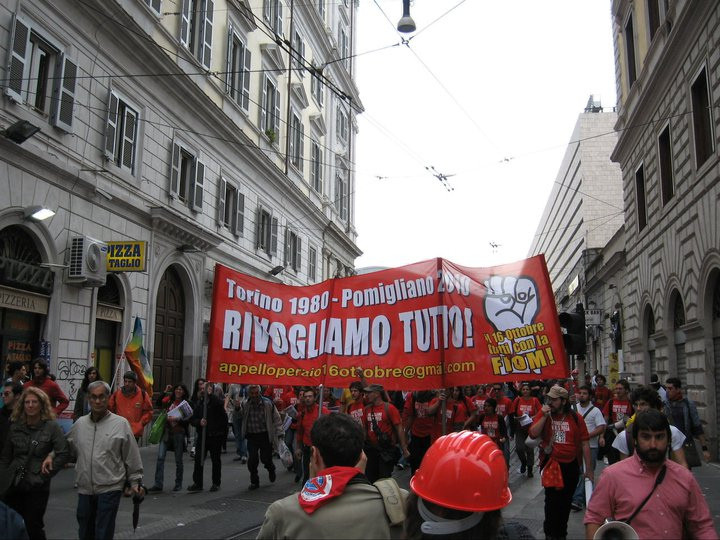 In the weeks prior to the October 16 demonstration a campaign of “fear” had been launched by the media, implying that allegedly terrorist elements linked to the Fiom were attacking the local offices of the Cisl. The truth was that some demonstrations organised by the Fiom at a local level ended in front of the local offices of the Cisl, where slogans against their shameful policy of class collaboration were shouted and a number of eggs were thrown at the windows of their offices. These protest actions were totally justified and simply revealed the anger of the workers, that not only have to face the attacks of the capitalists but even the open treason of these so called “workers’ leaders”.

The mood in society has become very polarised. You cannot stand in the middle in such a situation, and not take a position. You have to stand for or against the Fiom. So, the demonstration of October 16 was not just another Saturday stroll in the capital, as the trade unions have organised many times, but a day with important political consequences. Everyone knew that this was a test of strength, not only for the leaders of the Fiom, but for all the workers’ movement in Italy.

And it was quite clear to anyone who won the test. The most militant sections of the working class were all present in Rome. In the last few years we have seen many demonstrations against the government and the right wing, where several times the class character was heterogeneous, with the workers playing a secondary role as a class. This time, it was the working class that was leading all the other sections of society. The Fiat workers, especially from the Pomigliano plant, were in the forefront. They were speaking for the whole demonstration when they shouted out the slogan of the general strike, and they shouted it even louder just below the platform, as the speakers were intervening.

The slogan of the general strike had been raised in the days building up to the demonstration by Landini, the new Fiom general secretary, who called for it again from the platform, just before the speech of Epifani, the Cgil general secretary. But the Cgil leadership had already stated that for the moment no general strike was on the agenda, and that the trade union has to concentrate on a day of action on November 27, yet another Saturday. 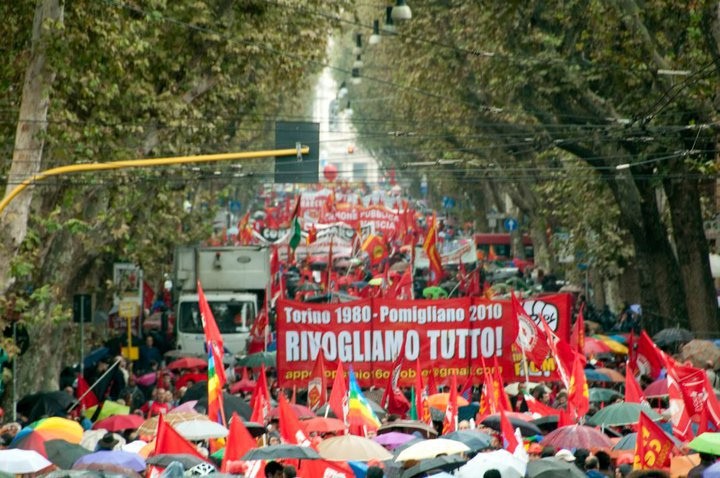 When it was Epifani’s turn to speak in San Giovanni square, his first sentences were drowned out by the massed ranks shouting the slogan “General Strike”. He was therefore forced to give some concessions to the demonstrators, when he said, “Let’s continue the struggle even with the general strike. If we get no response [from the government and the bosses, Editor’s note] we can continue our action with the general strike. It is one of our weapons, even if not the only one.” This was a “cheap concession”, because within a few weeks he will be resigning his position as the general secretary, nonetheless his words reflected the real pressure coming from below.

The crisis of the Berlusconi government places the proposal of strike action under a new light. The right-wing government is not deciding anything and is simply living by the day. Berlusconi’s party split last September with a new formation called “Future and freedom” emerging, headed by Fini (the Speaker of parliament and former chairman of Alleanza Nazionale). This was clearly under the influence of those sections of the bourgeoisie that wish to have more control over government policy.

The weakness of the government is a factor that gives more confidence to the workers. Even more importantly, the very fact that there is a workers’ organisation like the Fiom that is calling for strikes and demonstrations and is standing up to the bosses creates great expectations. In all the meetings organised to prepare for the October 16 demonstration, you could breathe a new mood, of hope and determination. This mood has also strengthened the student movement. On October 8, 300,000 high school students filled the streets to protest against the cuts in public education.

The importance of Saturday’s demonstration is revealed by the fact that every political force has had to comment on its significance. The Democratic Party is openly split. It did not support the demonstration, although a number of its leaders were present (but not the party secretary, Bersani). They would like to maintain good relations with both the Cgil (and the Fiom) and the Cisl at the same time, but it is becoming almost impossible, as the distances between them are growing.

What the left needs to do was indicated on October 16. What is required is the creation of a political force linked to the struggles of the Fiom, as an alternative to both Berlusconi’s PdL and Bersani’s PD. Even if this perspective is not presently on the agenda of the Fiom leaders, the idea is spreading, so much so that the main newspapers of the bourgeoisie (Corriere della Sera and Repubblica) have commented on it. A headline of one article published the day after the demonstration is significant, “The metalworkers union becomes a party”. Unfortunately, the leaders of the left, while they marched with the Fiom on Saturday, still crave for schemas of the past.

There is a good chance that there are going to be early elections next spring, and everybody, from Ferrero (PRC secretary) to Vendola (leader of the SEL, Left, Ecology and Freedom party, that recently emerged from a split to the right from the PRC), are seeking an alliance with the PD. This time, however, they claim it is going to be a new “democratic alliance”, with the involvement of the UDC, a centre party that up until 2008 was allied with Berlusconi. These left leaders are sticking to the old line of “anything but Berlusconi”, which has already done a lot of damage to the left, with the loss of all its MPs in the 2008 parliamentary elections. 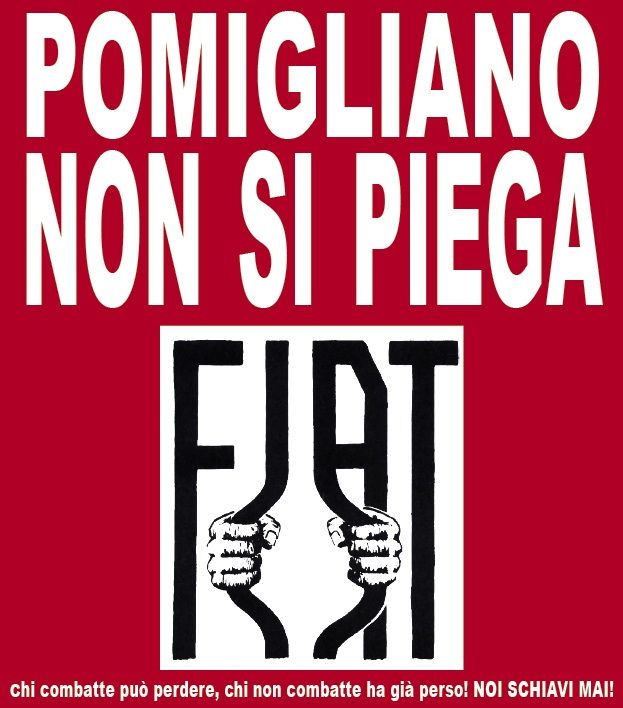 The difference, however, is that while Ferrero is begging for a couple of seats in parliament, Vendola, the governor of the Puglia region (a southern region of Italy) is challenging Bersani for the leadership of the centre-left! The growing popularity of Vendola, who was greeted by many workers in Rome, is a reflection of the big vacuum that has emerged on the left, but Vendola is filling it with a wrong perspective.

We, as Marxists in the PRC and the Cgil, think that the intervention of the communists must be centred on the movement and the struggle being led by the Fiom.

The PRC branch in Pomigliano, that we helped to rebuild, was at the forefront of the “No” vote campaign in the factory. We promoted an Appeal for the October 16 demonstration, which was signed by several shop stewards in Pomigliano, two of the three workers and shop stewards sacked at Melfi (another Fiat plant) in July for their trade union activity (and then hired again thanks to the struggles of their workmates in solidarity) and of dozens of shop stewards, trade union leaders and PRC leaders all over Italy.

We organised a section in the demonstration, behind a banner with the title of this workers’ appeal, and with the slogan “Torino 1980-Pomigliano 2010 - We want back everything” which was at least 500 strong, and in some moments even more. We sold more than 400 papers and we ran out of t-shirts with the slogan “Pomigliano will not surrender”.

Last Saturday the Italian working class appeared once again on centre stage as a main actor. This time it will not so easily give up that position.