Haitian President Jovenel Moïse was assassinated early this morning at his home by unidentified gunmen. At the time of writing, it is not clear who carried out this attack or to what end. With the country descending daily into a deeper and deeper crisis, there is now the possibility of an intense struggle for power between various actors, including the Prime Minister, the courts, as well as the armed forces and even Haiti’s powerful gangs. The fact of the matter is that Moïse, a corrupt, authoritarian, right wing president who was originally backed by US imperialism, had become increasingly isolated, and there are many different groups that would have an interest in his removal from power.

It is being reported in the media that armed gunmen stormed Moïse’s private residence at 1am this morning in Pétionville, a wealthy suburb of Port-au-Prince. The area is home to Haiti’s ruling class and political elite and is well guarded, as was Moïse’s home.

Armed men stormed Moïse’s residence and he was reportedly shot to death, while his wife was wounded in the attack. There are some reports that his wife has now also succumbed to her injuries, but this remains unclear at the moment.

Several media outlets are reporting that the armed men spoke Spanish and/or English during the attack. Some reports and videos published by the Miami Herald show the men claiming to be members of the US Drug Enforcement Administration (DEA) as they entered the neighbourhood and his guarded residence. It does not appear that the men faced any opposition while entering the neighbourhood or Moïse’s residence, raising questions about who was involved and the extent of the operation.

Haiti’s interim Prime Minister Claude Joseph has said that the men responsible for killing Moïse were mercenaries, but as of yet there is no clear idea who they are or who they were working for.

Haiti has been traversing a severe economic, social and political crisis for some time now. The world economic crisis and the COVID-19 pandemic have compounded an increasingly deteriorating economic situation, which has led to a widespread political and social crisis. The entire situation has been exacerbated with the rise of Haiti’s powerful gangs, who have unleashed a wave of terror in Haiti’s poorest neighbourhoods, where opposition to the Moïse regime was intense.

Moïse’s rule had become increasingly authoritarian. He had ruled by decree for almost two years after dissolving parliament when elections could not be organised. Through various decrees, it had become clear that Moïse was increasing the power of the presidency and limiting the powers of parliament and courts. The political establishment itself was becoming nervous and moved into opposition, to protect its own power and interests.

Moïse reinstated Haiti’s armed forces, increased the powers of the police, and established a National Intelligence Agency, which in effect was accountable only to the president. Moïse had also proposed a referendum to establish a new constitution, which would have also increased the powers of the president. Such a referendum itself was illegal under the current constitution and was the same method used by Duvalier to establish his dictatorship.

Moïse had remained in power past his mandate, which many argued ended in February this year. In an effort to protect its interests and assert itself, the bourgeois opposition, through the courts, declared Moïse’s rule beyond 7 February – the end of his mandate – illegal and called for him to step down. A Supreme Court judge was declared interim president by the opposition. But this attempt to remove Moïse from power by the bourgeois opposition using sections of the state apparatus was defeated when the president deployed the armed forces, and leaders of the opposition were arrested. Clearly, the bourgeois leaders of the so-called democratic opposition were not prepared to rely on the mass mobilisation of the workers and poor on the streets to oust Moïse and as a result, their half-baked attempt failed.

The Haitian masses have shown enormous courage and resilience in wave after wave of mass demonstrations and strikes over the last three years. What they lacked was a leadership prepared to go all the way and overthrow the whole rotten regime. Now the same bourgeois “democrats” who were unable to remove Moïse have issued a joint statement mourning his death. The masses certainly are not mourning him. The statement by the Political Leadership of the Democratic Opposition (DIRPOD) not only condemns Moïse’s death but also “calls on the national police to take all measures to protect the lives and property of all in today's complicated situation in Haiti”. This is the same police that has been used to brutally repress the Haitian masses every time they have come out on the streets! Instead of calling on the masses to mobilise in order to take advantage of the vacuum of power to enforce a solution in their own interest, the democratic opposition leaders’ statement “urges the population to stay cool by not engaging in rioting or violence against people to avoid further complicating the country's already worrying situation.” 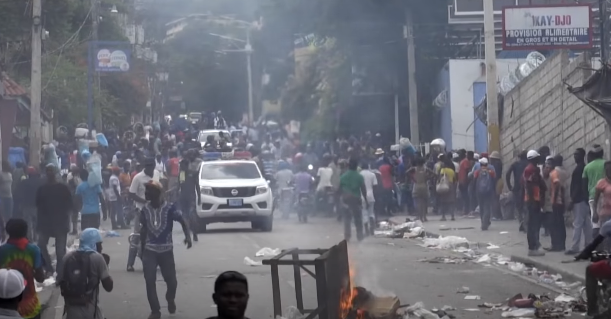 The Haitian masses have mobilised time and again for the last three years against the Moïse regime / Image: fair use

In the months since the political crisis in February, Haiti has been descending into a crisis of violence and kidnappings, driven by powerful gangs such as the G9. In the first two weeks of June this year, some 8,500 women and children were forced to flee their homes. There have been dozens of attacks, multiple massacres in poor neighbourhoods, hundreds of homes destroyed and burned down, and several prominent journalists and opposition leaders have been assassinated. It is widely believed that the gangs were working with the Moïse regime, and the massacres and assassinations were targeted in an effort to decimate opposition to his rule.

According to the UN, in the past nine months some 14,000 people had been displaced as a result of the gang violence in Port-au-Prince alone. In the middle of all this, cases of COVID and resulting deaths had also been increasing considerably. Underlining the humanitarian crisis unfolding in Haiti, in total, some 650,000 people are currently displaced in the country, including 500,000 in the metropolitan area of Port-au-Prince.

In response to these authoritarian actions, there has been a sustained mass movement against Moïse’s moves towards dictatorship. The constitutional referendum had been scheduled for the end of June this year, but in the face of widespread opposition was eventually postponed.

The Moïse regime had put considerable resources into a campaign to bolster support for the new constitution and for the proposed measures. There was very little support for the referendum. At each campaign stop, the masses came out onto the streets calling for a boycott. This was a direct continuation of the mass movement, which while not supporting the courts and the bourgeois opposition, had also been mobilising and calling for Moïse to step down.

In the past several months, Jovenel had become increasingly isolated. Opposition to his rule and the proposed constitution was widespread in Haiti. He had very little support in coming to power, with an election turnout of only 21 percent, and electoral fraud widespread. The United States and European Union even eventually announced their opposition, removing key international pillars of support for the Moïse regime.

Even Moïse’s own party, the PHTK, had come out against his plans for the constitutional referendum. The president’s own party was effectively his last pillar of support for his referendum plans. The reason for the PHTK’s opposition as yet remains unclear. Some believed this was a clever manoeuvre that gave Moïse a way out of the situation and would allow the ruling party to save face, while others believed it represented a deep split in the ruling party. For months, rumours have been swirling that Michel Martelly, the previous President and important figure in the PHTK, had been planning to stand against Moïse in the next presidential elections in an effort to prevent the courts and opposition from establishing a transitional government.

An amendment to the constitution in 2011 states that the Council of Ministers, under the leadership of the Prime Minister, is to take power in the event of the dismissal, resignation or incapacity of the President. However, with no functioning parliament and the state in total disarray, who exactly will take power and how they will hold onto it remains unclear.

As reported by the Miami Herald, there are currently only 10 elected officials in Haiti, all of whom are senators. The current interim Prime Minister, Claude Joseph, was never ratified by parliament (because of its dissolution) and had resigned. Just this week, Moïse appointed a new Prime Minister, Ariel Henry, but he has also not been sworn in. He would have been the sixth Prime Minister during Moïse’s rule. There was widespread opposition to his appointment, as Moïse’s right to appoint a new Prime Minister was challenged given that his mandate had ended in February. Neither Prime Minister has any legitimate power, as their position cannot be ratified legally by parliament. At the moment, even the Supreme Court, with key constitutional powers, is in disarray, as the president of the court recently died as a result of COVID complications.

CNN is reporting that the interim Prime Minister has taken over and declared a state of siege, which is one step above a state of emergency and one step below a state of war. The police and the armed forces have been deployed on the streets and according to Prime Minister Joseph “have the country’s security situation under control”. This seems hard to believe given that the President was just assassinated under their watch.

Whether this was an assassination designed to create further instability justifying a future coup, or whether a coup is underway right now remains unclear, as does the role of the police, the armed forces, and the gangs. Given the isolation of the President and the opposition to his regime, there are many, many possibilities. From the point of view of the masses of workers, the poor and the youth, they can only trust their own forces. Poverty, mass unemployment, violence, none of these scourges which plague millions of Haitians are the result of natural causes nor fate. They are the consequence of imperialist intervention and meddling, the repeated crushing of any attempt the masses have made to take their future into their own hands. US and European imperialism might try to take advantage of the situation to install a government that they could consider a safe pair of hands. Already the Miami Herald editorial is calling for the US to “step up, clearly and strongly, to back democracy in that tortured country”. We know that when they talk about “democracy”, they mean a US imperialist puppet government. The bourgeois opposition will also attempt to gain the upper hand, so that they can rule instead of the other bourgeois gang around Moïse. The masses must not have any confidence in any of them.

We will continue to follow the situation and provide a more complete analysis as events unfold and the facts become clear.