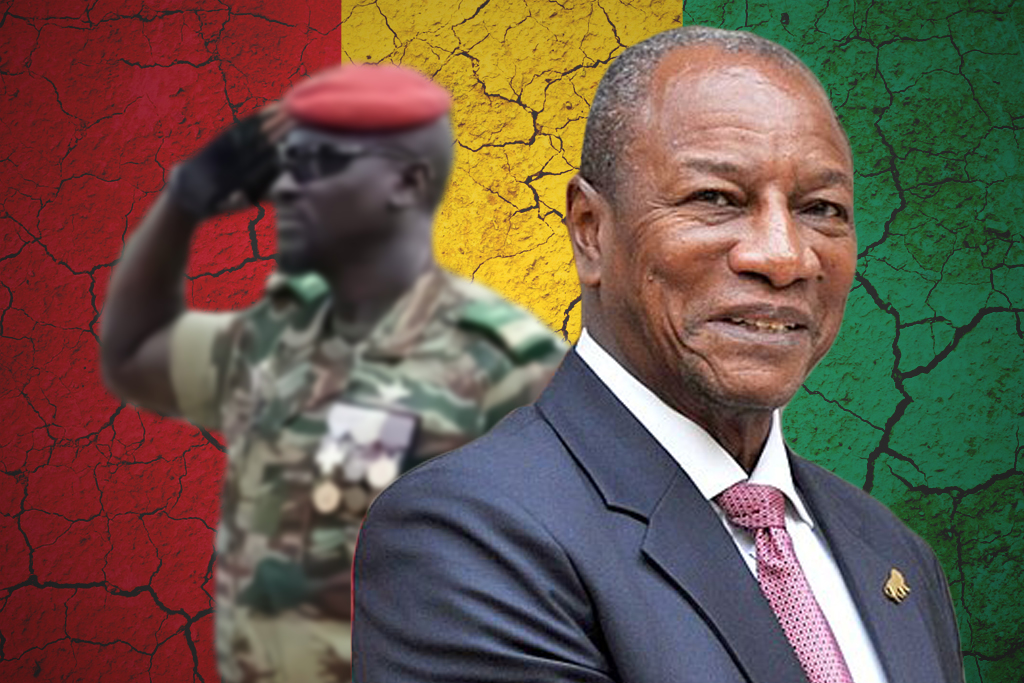 Turmoil has engulfed the impoverished west African country of Guinea since an army special operations unit announced that it had captured president Alpha Condé and dissolved his government on Sunday. The coup leader and head of the country’s special forces, Colonel Mamadi Doumbouya, announced on the state broadcaster on Sunday that the country’s constitution had been suspended and the borders closed. He also announced a 24-hour curfew in all areas except the mining areas.

The immediate cause of the coup appears to have been the dismissal of a commander in the special forces, which provoked junior officers to rebel and occupy the presidential palace. But whatever the case may be, this was only a trigger that brought deep contradictions to the fore. The coup comes amid a long period of political crisis in Guinea in the wake of Conde’s highly unpopular bid for a third presidential term last year.

Deep divisions exist within the state apparatus in Guinea, as different factions with competing interests vie for power. This was plainly visible in the hours after the announcement of the coup. The regular army, through the ministry of defence, initially denied that a coup had taken place but later vowed that any ‘attack’ by ‘mutinous forces’ would be put down.

“The presidential guard, supported by the loyalist and republican defence and security forces, contained the threat and repelled the group of assailants,” the ministry of defence said in a statement.

A short time later, heavy gunfire broke out near the presidential palace in Conakry. By Monday, it became clear that Alpha Condé and his government had been removed and replaced by a committee of army officers. However, the situation is still very, very unstable. The divisions in the state mean that the possibility of a counter-coup at some stage cannot be ruled out.

Military vehicles patrolled Conakry’s streets and the bridge connecting the mainland to the Kaloum neighbourhood, which houses the palace and most government ministries, had been sealed off. Many soldiers, some heavily armed, were seen around the palace.

The fall of Alpha Condé

This was not the first coup attempt against Alpha Condé. The day before the presidential election last year, a section of the military blocked access to the Kaloum district after an alleged military rebellion east of the capital. Condé won a controversial third term in that poll, but only after pushing through a new, deeply unpopular constitution in March 2020 that allowed him to sidestep the country’s two-term presidential limit. Dozens of people were killed during demonstrations against a third term for the president in clashes with security forces. Hundreds of people were also arrested. 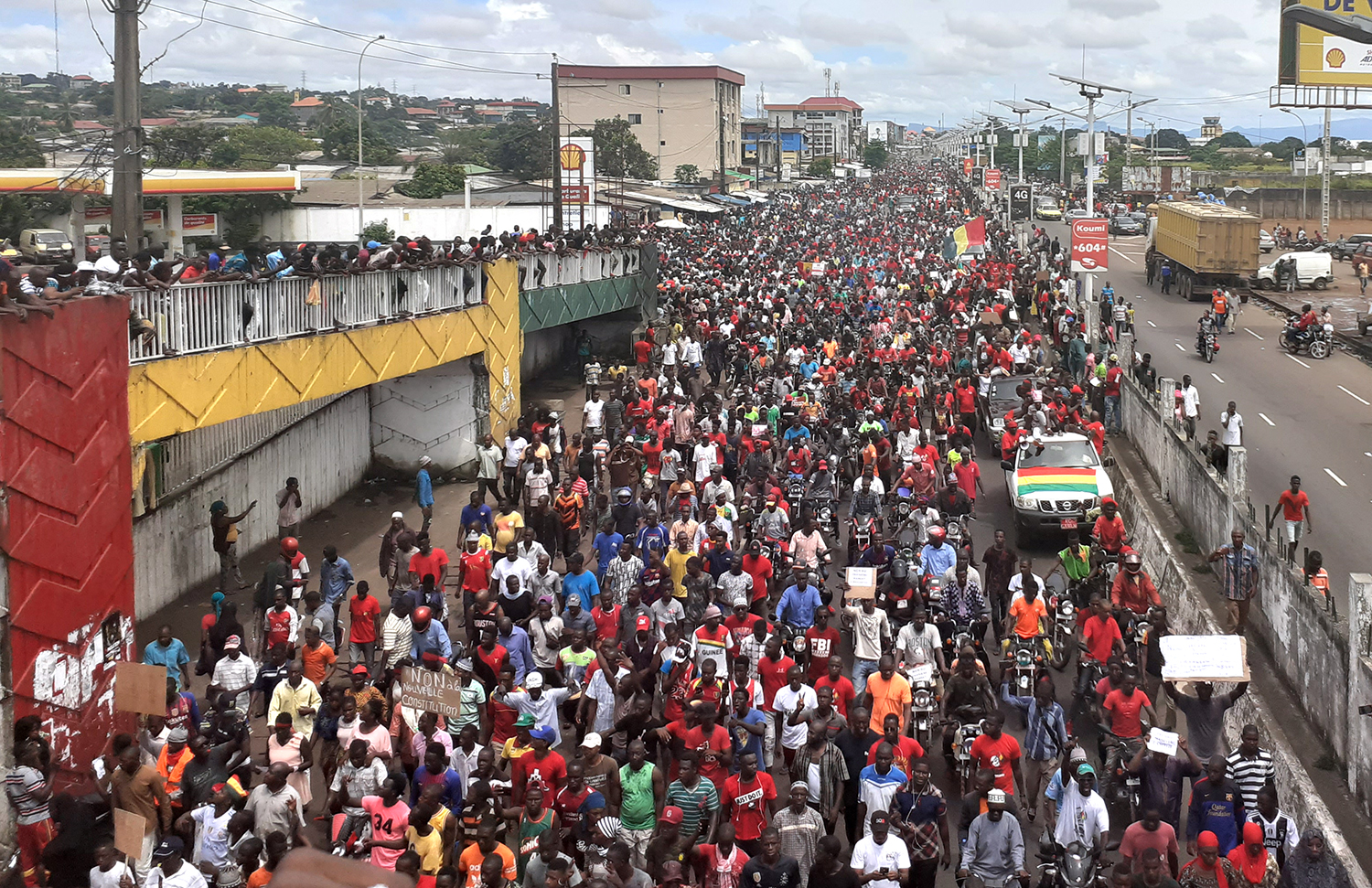 Mass protests broke out in 2019 and 2020 against attempts by Condé to change the constitution to permit himself to stand for a third presidential term / Image: Aboubacarkhoraa

He was then proclaimed president on 7 November last year, despite his main challenger Cellou Dalein Diallo and other opposition figures denouncing the election as a sham. Condé also survived an assassination attempt in 2011.

After the poll, the government launched a crackdown and arrested several prominent opposition members for their alleged role in abetting electoral violence in the country. He had become deeply unpopular over the 11 years of his rule. It can be no surprise then that the confirmation of his overthrow on Sunday was met with wild celebrations in the streets of Conakry.

When Condé came to power in 2010, Guinea’s constitution limited the president to two five-year terms in office. In December 2019, however, he announced a plan for a new draft constitution that, his party said, would allow him to stand in the upcoming elections. Despite fierce opposition, this highly controversial new constitution was put to a referendum in March. The resulting crisis exacerbated long standing political and ethnic tensions in Guinea.

Guinea has a long history of military rule since gaining formal independence from France in 1958. The state which emerged in Guinea after France relinquished military and bureaucratic control was extremely unstable. The weakness of the Guinean bourgeoisie gave a certain independence to the military caste. This explains the many coups and counter-coups which have plagued the country ever since.

The country did not hold democratic elections until 1993 when Gen. Lansana Conte (head of the military government) was elected president of the civilian government. He was ‘reelected’ in 1998 and again in 2003, though all the polls were marred by electoral fraud.

However, between 2005 and 2007 Guinea was rocked by a series of mass mobilisations and general strikes. This magnificent struggle of the Guinean workers and youth caused panic, not only with dictator Lansana Conté, but also in the ranks of French imperialism. The French ruling class is one of the main causes of the misery the majority of Guinea’s 13 million people endure. For decades they have pillaged the country, which is the world's largest producer of bauxite, an aluminium ore.

The many strikes and general strikes forced the country’s elite to grant minimal democratic reforms. Out of this manoeuvre, Alpha Condé became Guinea’s first elected president in 2010. Condé easily won a second term in 2015 after the opposition boycotted the elections and in 2020 the constitutional referendum cleared the way for him to seek a third term, which he ‘won’ in the October elections. This was followed by a period of violent crackdown and the arrest of opposition party leaders. Condé’s manoeuvres to remain in power have led to periodic protests in which hundreds of Guineans have been killed over the years.

Guinea, one of the world’s poorest countries, has the world’s largest bauxite deposits and is one of the world’s biggest producers. It also has massive iron ore reserves. The government of Alpha Condé has transformed Guinea into a top global exporter. China receives about half of its Bauxite supply from Guinea. Bauxite is used to produce aluminum, which is used in anything from car and airplane parts and consumer products like beverage cans and tin foil. 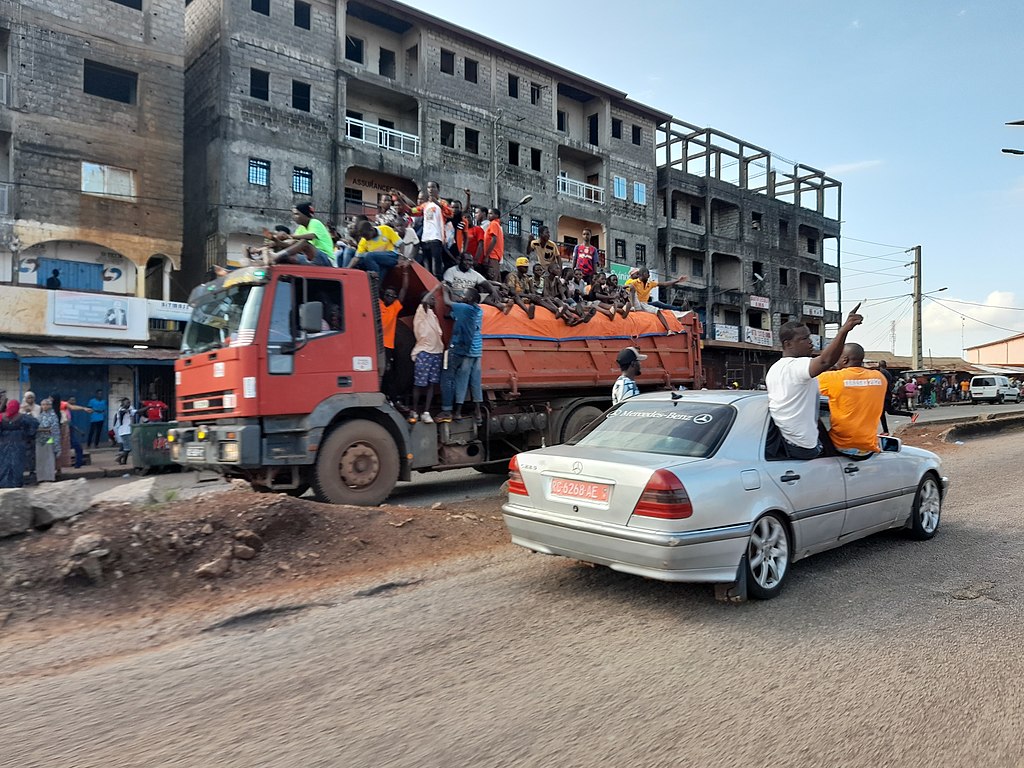 Scenes of locals coming out in support of the coup in Conakry. The Condé presidency has seen multinationals and a corrupt elite in Conakry grow rich of the raw materials of Guinea, whilst the majority have become further impoverished. It is no wonder that scenes of jubilation greeted news of Condé's overthrow / Image: Aboubacarkhoraa

The Boké region, in northwestern Guinea, has been the centre of much of the bauxite sector’s recent growth. The region now has dozens of open-sky bauxite quarries. Although Guinea’s bauxite boom provides profits to mining companies and their shareholders and a slice to the greedy elite in Conakry, the local population hardly benefits at all. Mining companies have expropriated farmlands without paying adequate compensation to the locals. They have damaged and polluted water sources and reduced communities’ access to water for drinking, washing and cooking.

Riots broke out in Boké in September 2017 due to anger at inadequate local services, particularly a lack of water and electricity, resentment at the rapid expansion of mining and broader concerns about the impacts of mining on local communities. These riots have grown into a series of uprisings and have been a constant feature ever since. Thousands of young people ransacked government buildings and erected informal checkpoints, briefly preventing mining companies from operating. The local population can see the huge financial benefits a company is making, they see taxes being collected, trucks taking bauxite from their farmland abroad but they hardly see any benefit for themselves.

The Condé years were no different to those of the past. Corruption and mismanagement was the order of the day as the different factions of the ruling elite compete for lucrative deals with international mining companies. His administration has become rotten to the core and extremely unpopular. Opposition factions in the regime have now decided to remove him before he could be overthrown in a popular uprising.

The situation is extremely volatile in Guinea. The next few days and weeks will determine whether the new military regime has a firm enough basis to stand on or whether it will be replaced by an opposing faction of the army. But whatever faction takes control, an immediate return to civilian rule is unlikely. The coup leaders have ordered all regional governments to step down, to be replaced by army officers. This means that the army is preparing for a period of military rule.

What is clear is that whatever faction takes over, it will be a regime of crisis. The state is divided as different groups compete for power and access to the lucrative crumbs falling off the table of the international mining companies. However, the pressure from below is mounting. The uprisings of the people, who can see the country’s mineral wealth being drained without much benefit to the locals, will continue whatever faction is in charge. The workers, youth and the poor should rely on their own strength and not support this or that faction of this corrupt, greedy and degenerate regime. Over the last few years, west Africa has seen marvelous uprings of the masses against equally corrupt regimes in Burkina Faso, Mali, Senegal, Togo and Gabon. This is the road the Guinean masses must follow. A united struggle of the people of the region against the corrupt regimes and their imperialist masters is the way forward.