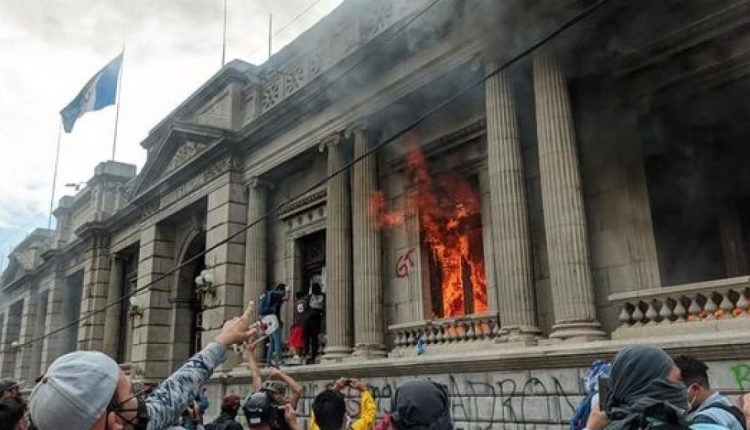 [The approval by Congress of a budget of cuts, at 5.30 am on 17 November, has unleashed a wave of protests in the Central American country. A section of the ruling class opposes the budget as it increases the country’s indebtedness. The vice-president broke ranks with president Giammattei and asked him not to ratify the budget.

Workers, peasant and student organisations have opposed the budget for their own separate reasons, as it cuts social spending. This political crisis has led to the irruption of the masses on the scene. On Saturday, 21 November, thousands gathered in the capital’s main square, while a group of protesters broke into the Congress building and set it on fire.

We publish here a first article by Juan de la Cruz from the Salvadorean section of the IMT. We hope to publish further reports from the Guatemalan comrades of the IMT in the next days.]

After five years of relative calm in the Guatemalan class struggle, when the fall of the corrupt government of Otto Pérez and Roxana Baldetti opened a wave of mass mobilisations of the youth and the working class, we are once again at the beginning of an institutional crisis, and possibly, the development of a mass movement.

Throughout these five years, the stability of the regime has remained upright, yet tottering along the way. There were dozens of corruption cases, including former President Jimmy Morales, who financed his presidential campaign with illicit money. For this, he came into conflict with the International Commission against Impunity and Corruption in Guatemala (CICIG). The conflict ended in Morales expelling the organisation from the country. The struggles between the institutions were very present during the last five years, foreshadowing an enormous instability in the regime.

The crises did not disappear with the arrival of President Giammattei. The government’s handling of the pandemic was truly disastrous. Guatemala has been one of the Central American countries where the most deaths from Covid-19 have occurred. During the pandemic, Giammattei did not shut down the manufacturing industry, or any other industry. For this reason, Guatemala’s economy was not as deeply impacted as the rest of Central America. However, this came at the cost of the deaths of thousands of Guatemalans, who gave their lives to keep industry on its feet. As if that were not enough, Guatemalans have had to confront the arrival of two hurricanes, which have left behind material damage, and more than 150 deaths in the northern region of the country. Once again, the government has been terrible at handling these crises. This is generating an enormous rage from the oppressed, against the state and the government of Giammattei.

The current crisis erupted due to the approval of a budget which includes cuts in all social areas, but maintains the privileges of the ruling elite. This budget, which the Guatemalan Congress approved at the proposal of Giammattei, includes cuts in health, education, and in institutions that attempt to reduce poverty and social exclusion, according to the UN Millenium Goals. On the contrary, the defence budget (military and police) received a considerable increase, as did the government expenses.

This budget was truly offensive to the exploited classes. Guatemala has the largest economy in Central America, with a GDP of 70 billion dollars per year. Yet, it has an enormous number of poor people, with high rates of malnutrition and emigration. At the same time, a small minority accumulates millions of dollars in profits. Guatemala also has the richest billionaire in all of Central America. These are the true masters of the country, and the ones who pull the political strings.

The protests for Giamattei to resign are spreading, and tend to be loaded with anger / Image: Carlos Sebastián

On the other hand, we have a broad layer of parasite-politicians of all parties in congress, consisting of 160 politicians who earn around 20,000 dollars a year, and President Giammattei, not to be outdone, with a salary of 18,000 a month. All of this, in a society where hundreds of families have to survive on less than two dollars a day.

These budget cuts have unleashed the rage of the youth. The divided bourgeoisie tries to control the crisis, and take advantage of the events for their own benefits. On Saturday 21 November, the vice president requested the resignation of the president, along with the entire cabinet, at which point he would also present his resignation as vice president.

The protests for Giamattei to resign are spreading, and tend to be loaded with anger, something which is obvious. The youth, the women, and the poorest are those who have suffered the brunt of the health crisis, brought on by Covid-19 and hurricanes. Cities like Petén are joining the fight.

The movement, as in most countries, lacks a programme and leadership that strives to overthrow the system, which is the cause of all crises. Guatemala has already passed through the experience of changing the president without changing the system, but the corruption and the evils of capital continue to deepen. This proves that it is not only the governments, but the entire capitalist system that must be overthrown.

The movement must arm itself with a revolutionary socialist programme: one which proposes the expropriation of all of the big capitalists, and places the wealth (produced by all of the country’s exploited) at the disposition of everyone, to end hunger, homelessness, illness, and social exclusion.

For now, there is no real alternative for the oppressed classes to replace the corrupt and hated government. The masses should organise itself, and pose the following tasks. It is not only about stopping the cuts with struggle, which is extremely positive; it is also about ending the domination of the parasitic ruling class and its state, and replacing it with a state of the workers, women, indigenous people, the youth, and all the oppressed.

What is happening in Guatemala is not disconnected with what has happened in Chile, Peru, and Ecuador. There is a close relationship: the economic crisis, corruption, increase in poverty, unemployment, and exploitation. All of these problems are the products of a failed system, an inhumane system which must be brought down.

The ruling classes are increasingly unable to maintain stable regimes in their own countries. Bourgeois democracy is useless in times of economic crisis. Faced with this situation, all kinds of movements will emerge, with all kinds of ideas – some confusing and contradictory. Could it be any other way, if in the end, the parties of the working class have betrayed their class and have become part of the system?

A mass movement may erupt in Guatemala if the crisis of the regime is not resolved in time. All of the raw material for a social explosion is present in Guatemalan society. We might have another 2015 in Guatemala, or something even more significant.