Greece
Share
Tweet
The brutal killing of a young 15-year old school student in Athens over the weekend at the hands of a police officer has suddenly radicalised the whole of Greek society, bringing to the surface all the tensions that were brewing below the surface.

On Saturday night, an officer of the Special Forces of the Greek Police killed a young 15-year old school student, Alexandros Grigoropoulos, in Exarchia in the centre of Athens, (just 200 meters from the office of our paper). This is the modern "democratic" manner in which a police officer answered the usual anti-police slogans that a small group of ordinary and completely unarmed school students were raising against him. The police officer shot at the group of school students in an area where there are many coffeehouses full of people and at an hour (9pm) when there are many youth gathered together enjoying an evening out. 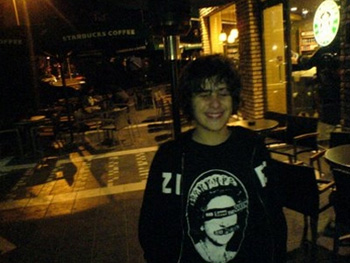 This fascist, brutal and unprovoked attack on the part of the Greek police has led to a widespread and deep feeling of disgust throughout Greek society. It reminds everyone of the criminal actions of the Greek police forces in the past, of the black years of the Greek colonels' dictatorship (1967-1974), but it has also served to highlight in the minds of the people the many brutal actions of the Greek police over these past four years of right-wing government. Two years ago in Thessalonica six police officers brutally and mercilessly beat up a Cypriot student, causing serious injuries, both physical and psychological. In the same period one police officer seriously injured a young teacher by using knuckledusters. Many immigrants are also regularly brutalised by the Greek police, especially in the police stations of Athens, as many videos that have been broadcast on Greek TV channels have revealed. All these are just a few examples of the "democratic" actions of the Greek bourgeois state in the last few years under the New Democracy (ND) government. 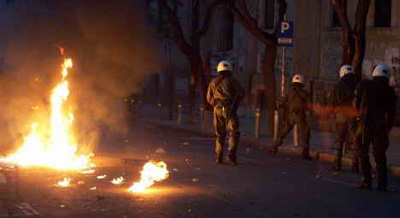 This most recent killing has had a big impact on every ordinary working person and in particular on the youth of Greece. On the night of the killing thousands of young people spontaneously mobilized across Athens, Thessalonica and Patras, to demonstrate their anger, clashing with the police throughout the night into the early morning. Yesterday, Sunday 8th, thousands of people demonstrated all over Greece, in 14 different cities. Today another rally is planned in the centre of Athens, which will see the participation of many more people than yesterday.

As of today, from the early morning, the big majority of schools all over Greece have been occupied by the students. As we write, the University students are at this moment gathered in massive general assemblies to decide what action to take. The High School Teachers' Union has already decided to call a 3-day strike and the Primary School teachers have also decided to come out on strike tomorrow. The KKE (Greek Communist Party) and SYRIZA, a left front around Synaspismos, have also decided to take part in today's rally. 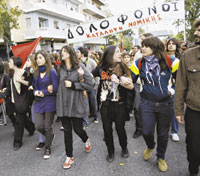 One important element that has to be underlined is that three weeks ago, long before the killing, the Greek Confederation of Workers' Unions in the private and public sectors (GSEE and ADEDY), had already called a general strike against poverty and the threat of unemployment to the Greek working class for this coming Wednesday. Without a doubt, the general strike will now be much more different after the killing of the young Alexandros.

The Greek government has been trying to calm the people by promising "exemplary punishment" of the police officer involved in the shooting, but the mood in society is one where such promises have only a very limited effect. The latest opinion polls show that the ND is 6-7% behind PASOK. The combined vote of the workers' parties stands at over 60% in the opinion polls. All the factors exist for the fall of the government in the very near future.

The Marxists strongly support and actively participate in the big movement against police terror, but they also explain that the killing of the young Alexandros was not an accident, but the expression of the reactionary nature of the bourgeois state and of the present ND government. State terror, for the ruling class, is a necessary weapon in support of the capitalist system. Police violence is the twin brother of poverty, exploitation and privatisations.

Police brutality is a method of class war against the working people. The ruling class is organising class violence against the working class and youth and that is why we must react against it, and the whole labour movement must be mobilised using the methods of class struggle. Unless the mass organisations of the working class mobilise all their forces, they will be making the very serious mistake of leaving the fightback in the hands of the anarchists and ultra-left groups who insist on their blind and adventurist methods. The burning of cars and shops as a "method of struggle" has the opposite effect to that which is desired. These methods give the police forces the excuse they are looking for to present themselves as "protectors of people's property". It helps to distract attention away from the responsibilities of the police and to criminalise the youth movement.

We believe that the trade unions, the workers' parties, the PASOK, KKE and SYNASPISMOS, and the mass organizations of the youth must immediately come together in a united front against both the government and the generalised attack being launched by the Greek bourgeoisie. The aim of the forthcoming general strike must be to bring down the government and start a struggle for the election of a left socialist government, which by leaning on the labour movement and the urban and rural poor can smash the repressive institutions of the state, put an end to oppression and carry out a genuine socialist programme. Only be expropriating the major capitalist companies and placing them under democratic workers' control and management can capitalist slavery and violence be eradicated once and for all.