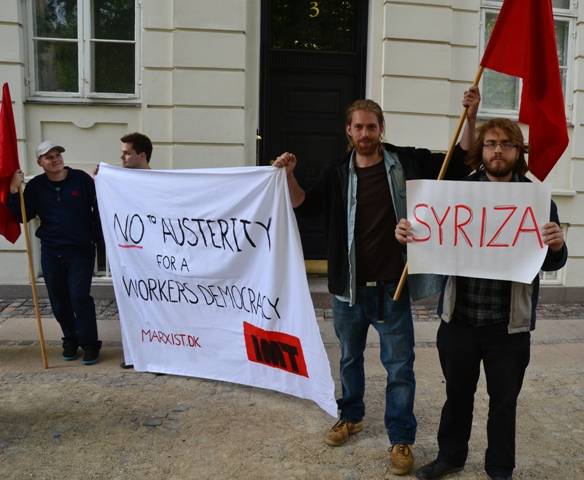 On Friday, June 15, Socialistisk Standpunkt called for a picket in support of the Greek left, prior to the elections on Sunday. But it attracted the attention of the Danish police who were in no mood to be “reasonable”.

It is obvious to everyone that Europe is in a very tense situation. In many countries, among others the large and important economy of Spain, the foundation are so shaky that any moment a dramatic shifts can occur, that can shatter the entire world. In this process Greece is in the most advanced state of crisis.

Time after time, over the last one and a half years the Greek masses have shown great courage and determination against the devastating cuts and austerity measures they are experiencing. In the country there are acute shortages of basic medical equipment and lots of people every day are forced to resort to soup kitchens to avoid going to bed hungry at night.

In the elections on Sunday, the choice was between the conservative New Democracy party or the left-wing SYRIZA, that throughout the recent period has experienced a massive growth in support. SYRIZA has managed to involve sections of the working class spearheading the establishment of peoples councils where the future of Greece has been discussed. The party had made it clear that if they won the elections they would not abide by the EU dictates for further massive cuts. 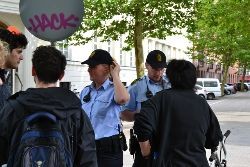 On the basis of this situation Socialistisk Standpunkt organized a picket in support of the Greek left. It soon became clear that the solidarity picket, which had mainly been called via the social media, was gaining quite a lot of support among activists who wished to show their support for the Greek workers and youth, and amongst these was a group of Greek students living in Denmark.

The picket in front of the Greek embassy in Copenhagen started out very well, with people gathering, carrying red flags and banners. At the beginning the police, that was there from the very beginning, remained friendly and calm. By the time around ten people had gathered, a commanding police officer showed up and ordered the other police to collect the names, addresses and dates of birth of all participants in the demonstration and off all those who might join later.

Such measures are not normal in Denmark and even the police officers were surprised at this initiative, which they by their own admission they had never before experienced. This was a completely unfounded provocation. It must be made clear: to systematically collect data on all participants in a completely legal and already reported picket is incompatible with freedom of speech and assembly. These police measures are only the latest in a series that have all the same purpose: to give the police as much power as possible to break up demonstrations, making it impossible to demonstrate in practice.

The police’s method of registering all demonstrators made it impossible to carry on with the planned programme of the picket. Around eight to ten Greek students living in Denmark had turned up, but with good reason did not want to get registered. Greece’s history of military rule, combined with the present situation, led to the Greeks withdrawing. Also others among the 25-30, who had by now turned up, for personal or principled reasons did not want to be registered for a peaceful and legal political activity.

There was thus no way of avoiding the breaking up of the picket before it had even begun. Instead, those present decided to meet up one hour later to discuss the situation in Greece and what the Danish left could do.

And so that is what we did. At 6pm around 15 of those who had turned up met at Nørrebro. Here Jonas Foldager gave a lead off about the latest movements and the perspectives for the left wing. Afterwards a lively debate took place with updates on the latest polls and developments. Especially the Greek students who showed up had some interesting and personal accounts of the situation in the country. 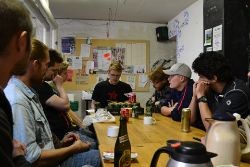 Also the question about the extreme right wing was discussed. One of the Greek students made the interesting point, that it was obvious that both in Greece and Denmark there is a tendency for the left wing to spend all their energy discussing parties like the Golden Dawn. It is a danger for the movement, because the decisive question now is not to discuss how to fight small, violent fascist groups (which of cause is important), but the far more important question as to how the working class can take power.

Likewise the question of the role of the Danish left was discussed. One of the conclusions was that the most important thing now is that the revolutionary forces must become as strong as possible before big movements begin here in Denmark. The movements we see unfolding in southern Europe will influence on the situation here. When the government carries out new and more devastating cuts and the working class experiences massive pressure from all sides, it will provoke big battles that will shake all sections of society.

The successful meeting ended with the writing of the statement below, which was signed by Socialistisk Standpunkt and the Greek students organized in the group Crisis Mirror.

Despite the insistence of the police to break up the picket in solidarity with the Greek left, the events of the day that ended with a good meeting must be seen as a success. The left must never be scared by the measures used by the police. As the class struggle grows, so will state repression. But even the most brutal measures will not be able to stop the working class once it starts moving. Repression or not, the most important task of revolutionaries is to organise, study Marxism and prepare for the coming class battles.

In the elections of Sunday, June 17 Greece stands on the verge of profound political change. In solidarity with the Greek left, several Danish and Greek left activists tried to organize a picket in front of the Greek embassy in Copenhagen.

We were met with an overkill registration of every participant in the picket on the part of about eight police officers. They demanded everyone provide their names, addresses and dates of birth. Their excuse for doing so was that the embassy had experienced graffiti and supposedly a fire bomb in an earlier event, which had nothing to do with this picket.

These police allegations are questionable, considering that a member of the embassy staff actually came down to show their support for our picket. He too, however, was also harassed by the police and had to leave.

This is clearly a continuation of the measures enforced by European authorities against the currently escalating European mobilisations that are taking place because of the austerity measures.

We, as left wing activists, are very concerned about this development that endangers the freedom of speech and assembly.