As the June 16 elections in Greece are getting closer, the last opinion polls are being published. They reveal a number of interesting things.

First of all, the number of people who would vote for SYRIZA have increased massively in relation to the votes it received in the May 6 election, when it got 16.7% of the votes. Now all opinion polls consistently show the party getting between 25 and 31.5% of the votes (the highest figure being that of the last Public Issue poll for Kathimerini). This is despite the fact that there has been a massive campaign of intimidation, threats, blackmail and fear against the party by all representatives of the Greek and international bourgeoisie. The European Union, the European Central Bank, the IMF and prime ministers and finance ministers from many European countries, all have threatened that a victory for SYRIZA would mean the end of EU funding (which in any case goes to pay German and French banks), Greek exit from the euro-zone, economic chaos, etc.

Just to give you a taste of the tone of this campaign, here's a quote from the outgoing PASOK Minister of the Interior Michalis Chrysohoidis:  "If Greece cannot meet its obligations and serve its debt the pain will be great. What will prevail are armed gangs with Kalashnikovs and which one has the greatest number of Kalashnikovs will count. We will end up in civil war." Despite all this SYRIZA's votes according to the opinion polls would still increase by between 60-100%, showing on the one hand the depth of opposition against the austerity policies imposed and on the other, the fact that now SYRIZA looks like a serious proposition with a chance of coming to power.

At the same time, the very parties who signed and voted for the terms of the Memorandum, including ND and PASOK, are now campaigning on the basis of ... their opposition to those austerity measures!

There is a parallel process of concentration of the right wing vote around New Democracy. The Democratic Alliance party which was formed a year ago as split off from ND and which received 2.5% of the votes in May, has now gone back into the fold of New Democracy. The Independent Greeks, a right wing, anti-Memorandum split off from New Democracy, has also lost votes (from 10% in May to 5-7% now) as a result of the fact that its leader was seen to betray the cause of opposition to the Memorandum. Extreme right wing LAOS, which only received 2.8% at the elections (crushed because of its support for the Papademos government) has further collapsed in the polls, down to between 0.4 to 1.7%). Opinion polls, conducted since the June elections were called, give ND between 25 and 29.4% of the votes.

Interestingly the openly neo-Nazi Golden Dawn has also seen half of its votes disappear, from 6.97% in the May elections to 4.4 - 5.4% now. This confirms what the Marxists said at the time that this was mainly a protest vote, which was occupying the ground LAOS had lost. An interesting GPO poll found that of the nearly 7 percent of Greeks who voted for Chrysi Avgi (Golden Dawn) in the May 6 polls, 60 percent did it as a protest vote, 29.3 percent did it "to get rid of illegal immigrants" while only 4.8 percent described themselves as far-right. We should not underestimate the threat which GD represents, as its core is composed of fascist gangs who have not hesitated in using violence against immigrants and left wing organisations. However, the vote it got in May does not represent its real base of support. The 4.8% of its voters which describe themselves as "far-right" would represent about 0.3% of the electorate.

In the camp of the left, the most significant thing is the collapse of the Communist Party (KKE), which is paying for the extremely sectarian policy of its leadership in rejecting the appeal from Syriza to form a government of the Left (graphically shown by Papariga's refusal to even meet Tsipras for discussions). While the KKE received 8.48% of the votes in the May elections, it is currently polling only between 5 and 5.7%. This would mean losing about 200,000 of the 536,000 votes it got in May.

So far, this has only had the effect of increasing the hysterical and sectarian attacks of the KKE leadership against Syriza, precisely the opposite of the tactic of United Front which Lenin advocated towards other workers' parties. In a speech yesterday, KKE  general secretary Aleka Papariga concentrated in denouncing SYRIZA as a "new social democratic party" like PASOK, part of a general plot of the ruling class against the KKE. She event went as far as saying that while she did not subscribe to "conspiracy theories" and was not saying that there were any direct "links", she drew attention to the fact that "US media was giving wide coverage to SYRIZA" because it was in the interest of the US to break up the European Union (which is dominated by Germany) thus clearing the way for the US to move against Russia (!!).

As a side note, one of the opinion polls traced changes in voting and produced a very interesting diagram showing what percentage of other party's votes would be going to Syriza: 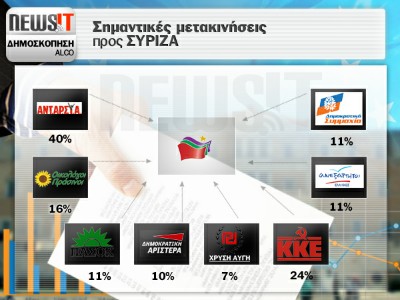 The graph shows how 24% of those who voted for the KKE in May would now vote for SYRIZA, which would also win votes from a few other parties. As a side note, despite the sectarian policy of ANTARSYA (a coalition of extreme-left sectarian groups) leadership of rejecting an appeal for unity from SYRIZA, 40% of its voters, with a healthy instinct, would vote SYRIZA.

It is still two weeks from the elections and many things can happen. In this situation, violent shifts in public opinion are intrinsic in the situation. The general trends however, are clear.