Below is a transcript of the position of the Communist Tendency of SYRIZA as put forwards in the meeting of the Central Committee, delivered by comrade Stamatis Karagiannopoulos: 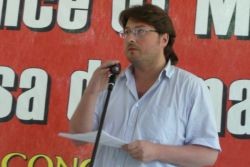 The last month marked a qualitative change in the political situation.

Instead of the anti-memorandum commitments, the government began to implement policies of wild austerity.

Instead of a programme against the interests of our class enemy, the government adopted the program of the class enemy itself.

And instead of a SYRIZA-based government, we have in power a government based on a parliamentary majority of "national unity" with the parties of capital. In fact, the leadership team and the MPs who follow it have, in practice, defected from the party.

All this was done with the complicity of the leadership team, in a double coup.

Firstly, in a parliamentary coup that turned the popular "No” vote into a "Yes" in the Parliament, and secondly in a party coup that postponed any meeting of the party committees and now brings the party before the "fait accompli" of a new Memorandum.

This solution, however, is hardly a technocratic management plan which focuses on the symptom of the crisis, the monetary circulation. The real alternative, a truly scientific programme, is one that meets the needs of the working people and the level of development of productive forces.

The political programmes that became a guide of action to the masses and catalytically influenced history - such as the Communist Manifesto, the programme of the Bolsheviks, the programmatic documents of the Communist International - were not technocratic projects, but calls for action on anti-capitalist, socialist demands.

Is such an alternative programme something alien to the electoral commitments of SYRIZA? No. But these existing commitments must be supplemented with necessary anti-capitalist economic measures including the socialization of the levers of the economy, the crushing of the corrupt and wasteful bourgeois state, in addition to the active and resolute participation of the working people in power.

The new memorandum will not solve any of the problems of Greek capitalism. It will only slow down the path to the exit from the eurozone, asking the people to pay the price.

The impasse of Greek capitalism is so great that the brazen governmental declaration that the implementation of the Memorandum will "alleviate the suffering of the people" is not just infeasible: in a recession that will deepen this year, the government will be forced to constantly implement new wild austerity measures. In these conditions, the leadership of SYRIZA has the role of the people's misery manager and is under enormous pressure from all sides.

What matters now is not leadership’s own predestined fate but the fate of SYRIZA. SYRIZA seeks to become the booty that leadership will take with them as they move towards the bourgeois, pro-memorandum camp. The only way the left militants of the party can prevent this is to press for an Extraordinary Congress before the signing of the new Memorandum with a view to radically change policy and to change the leadership. "