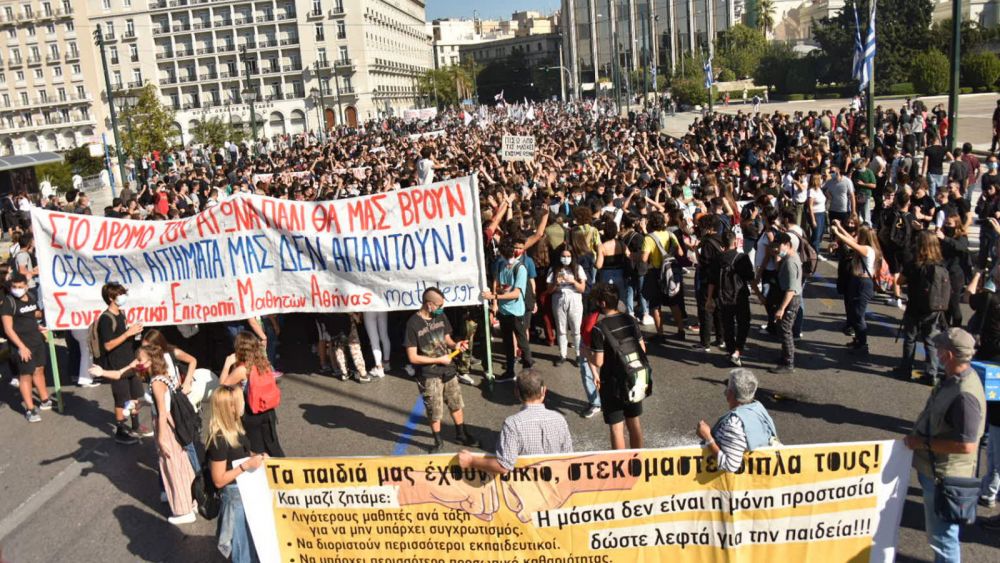 Not long after the beginning of the school year, a movement of school occupations was started by students in Greece. The immediate cause was the fact that the government, despite having six months to prepare for the school year, did not take any serious measure to protect students and teachers from the pandemic. Instead of hiring more teachers, in order to have smaller classrooms, and bringing on additional workers for cleaning and sanitation, the government simply forced the students into classrooms of more than 25-30. Instead of spending money on protecting the health of students, teachers and the public in general, the government is spending billions on expensive weapons, and on subsidies and tax cuts for big businesses and the banks.

Students all over Greece occupied their schools and organised rallies in many cities. The occupation movement exceeded 700 schools in the last week of September and is the largest student movement since the youth uprising of 2008, following the assassination of the student Alexandros Grigoropoulos by a policeman, after which 900 schools were occupied.

The government has used and continues to use every means to stop the movement. Initially, they deployed slander against the students, saying that the occupations were organised by students who didn't want to wear their masks. When this blatant lie became apparent, they resorted to prosecution of militant students and used the police in order to frighten those outside the occupied schools. In several schools, right wingers disguised as ‘outraged parents’ physically attacked the students to try to ‘break’ the occupations. Finally, the Ministry of Education imposed compulsory continuation of studies through the internet in all the occupied schools. Students that supported the occupation would not be allowed to participate and would be considered absent from class. The teachers were called upon to name those who participated in the occupations.

100 absences from class is sufficient to fail the school year, and in this way be forced to remain in the same class the next year. Already, most of the students participating in the movement have more than 50 absences. The teachers’ trade union OLME refused to play the role of policing the students and called on teachers not to comply with the government. This was not enough though, and many schools were forced to open in the first week of October. The will of the school students to continue the fight was not broken, and they continued to participate in demonstrations, with a number of schools still occupied.

In all the main demonstrations, the police, without even the pretext of provocation, have attacked the students with teargas and batons. In the rally of 15 October, they arrested five students (three 14-year-olds and two 17-year-olds) and kept them for four days in the main headquarters of the police. This was a clear attempt to terrorise the students. One of them, 14-year-old Vangelis Grigoriou, was even accused of criminal acts. Vangelis participated with his classmates in the 15 October rally in Propylaia, along with thousands of other students from all over Athens. As soon as he approached the pre-assembly area, the police searched his bag. This was not the only incident, as the government ordered the police to conduct mass checks on all those who approached the gathering, as part of the organised attempt to intimidate the students that day. The police finally proceeded to randomly arrest students and detain Vangelis and four other students for four days, without allowing their parents to see them, nor to give them clean clothes or food.

These measures show that the government is in a panic. They are afraid – and rightly so – that this movement could take on even greater dimensions. The demands of the students are absolutely essential measures for the protection of their peers, teachers and the general population from the spread of COVID-19, and therefore have the support of the majority of teachers, parents and workers. Above all, however, the government is afraid that this movement would become a benchmark for mobilising the broader strata of the working class and youth to rise up against austerity policies, the absence of health measures, and the overall effects of the crisis of the capitalist system.

How can the movement be victorious?

At present, most occupations in the schools have ended or are about to end. This did not happen because the students have lost their will to fight, but for four main reasons:

Students must develop democratic bodies to coordinate their struggle at a local and national level if they are to resist the blackmail of the Ministry of Education and sustain the movement / Image: Menoume energoi

The fact that there is no democratic organisation and coordination in the student movement is crucial. The students vote on whether or not there will be an occupation, however they do not decide collectively for wider actions by region, city and nationwide. To a large extent, the Coordinating Committees of Students play a coordinating role in various cities. However, these are not committees that have been democratically created by the movement but emerge from the student groups of the KNE. It is necessary to create a real coordinating body that will authentically express the will and aspirations of the student movement. This can be done only through the election of representatives from the assembly of each occupied school and the creation of Coordinating Committees per Municipality initially, and then nationwide with the creation of a Nationwide Students’ Union that will undertake the organisation of the struggle. This will allow the student movement to better organise the struggle, put forward demands and also coordinate their struggle more effectively with the student and labour movement.

There is also the need for unity in the student movement. Unfortunately, however, there is a systematic attempt to split the movement by the KNE forces, with typical examples being the general rally on Thursday 8 October and the march on 15 October, where the student bloc of the Athens Coordinating Committee made a separate demonstration from the other students and teachers, without explaining the reason to the students who participated in the rally. These divisive practices are particularly damaging because they weaken the movement and frustrate and confuse thousands of students. They can be isolated if the students themselves take over the organisation of the movement and democratically decide their methods of action in the way we explained above.

Above all, in order for the students' struggle to be victorious, the decisive entry of the labour movement into the struggle is required. The strikes of OLME, but also of ADEDY (the civil servants’ union) on 15 October must be the first steps towards further escalation of the struggle. The student movement must also continue the struggle. The main weapon of the student movement is the occupation of the schools. In schools where teachers support students and will not implement studies through the internet, students must reoccupy their schools. In schools where teachers do not support students and threaten to implement internet studies, students should use alternative methods of action with abstentions, local demonstrations, and one-day occupations on days when central student movement demonstrations take place. In all schools, occupied or not, there should also be general assemblies to discuss the next steps of the movement.

Government policy in schools is not just an expression of a reluctance to spend money to protect the health of students and teachers. It expresses the decline of the capitalist system itself and its inability to protect public health, as evidenced by the policies of governments around the world that have sentenced thousands to death. Capitalism is not only incapable of securing decent wages, jobs and housing for the majority, but is incapable of implementing the most basic measures to protect health and life. So the struggle for health, education and a better life is inextricably linked to the struggle to overthrow the capitalist system itself!