Details
In Defence of Marxism
16 February 2012 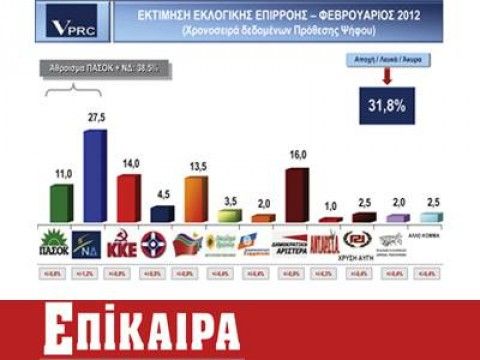 The first opinion poll after the voting of the Memorandum in Greek parliament shows a further weaking of the government parties and a continued shift of the electorate to the left.

On Thursday, February 15, the Greek weekly Epikaira published an opinion poll carried out by VPRC polling company. This was the first poll after Greek parliament passed a massive package of cuts and austerity measures in the early hours of Monday, February 13, in the face of unprecedented opposition in the streets.

The poll shows a further weaking of the government parties with New Democracy going down to 27.5% (the same VPRC poll in January gave them 30.5%). According to this poll PASOK would receive 11% of the votes, down from 18% in December and 12% in January in the same VPRC poll (although the Ekathimerini / Skai TV poll in early Februray put them at only 8%, we think it is more accurate to compare opinion polls carried out by the same polling company).  These two parties combined received 77.4% of the votes in the 2009 elections. In just over two years of attacks on living standards and brutal austerity adjustment plans, they are now down to 38.5%. So far the vote for ND had not gone down as dramatically as that of PASOK, as it had voted against earlier austerity packages, but now that it has committed itself fully to the passing of the new Memorandum with the troika, voters have started to move away from it as well.

Finance Minister and leading PASOK figure Venizelos enjoys the confidence of only 18% of Greeks, while 76% do not trust him.

The Epikaira poll also confirms the fall in voting intention for extreme right wing party LAOS to 4.5%, having received 7% and then 6% in the December and January VPRC polls. Its withdrawal from government and abstention in the Memorandum vote has not helped Karatzaferis recover the lost ground. Some of its votes have gone to the even more extreme right wing Golden Dawn, which stands now at 2.5%.

To the left of PASOK, all parties opposing the Memorandum are strengthened. Communist KKE receives 14% (up from 12.5% in January), Coalition of the Radical Left SYRIZA gets 13.5% (up from 12.5%) and Democratic Left (a right wing split from Syriza) receives 16%, an increase from 13% in January. The combined votes of these three parties according to this poll represent 43.5% of the electorate, when in the 2009 elections they received barely 13.1%. This represents a sustained and growing shift to the left in Greece as a direct result of the impact of the brutal capitalist adjustment implemented first by the PASOK government and then by the technocratic government of Papademos (supporter by PASOK, ND and LAOS).

As we have repeatedly pointed out, the growth of the Left could be even bigger if they were part of a joint coalition with a clear alternative against the policy of permanent austerity which the overwhelming majority of the Greek population reject. The leader of the extreme right party LAOS, Karatzaferis, has declared: "My great fear is that they are turning Greece into a communist state. (...) I worry about what will happen after elections in April."

The growth of the Left parties is the real reason why German, Dutch and other European country's officials have been voicing concern over the forthcoming elections in Greece. In an article entitled "The Greek Left Strikes Back", the Wall Street Journal has the following to say:

"The rise of the left in Greece may well be why Mr. Samaras has been incessantly pressing for elections are soon as possible. A person familiar with his thinking was saying that the longer it takes to hold elections, the higher the left-wing parties will poll. This would further threaten Mr. Samaras’s chances of forming a majority government unaided. As the Greek political deck is being reshuffled by the hand of austerity and foreign aid, the rise of the Left is not to be ignored. This is a long game and, even if Mr Samaras is elected to government in April, his troubles will by no means be over. He will likely find a strengthened opposition in the left and hostile sentiment on the streets."

Some are suggesting that the bail out should be delayed until after the elections, other are now hinting that elections should not take place and the mandate of the Papademos government be extended (or perhaps a government with only technocratic ministers be formed). Clearly when bourgeois democracy does not produce the results the capitalists want, they are suddenly not so keen to respect it.