Details
Stamatis Karagiannopoulos in Athens
15 May 2015 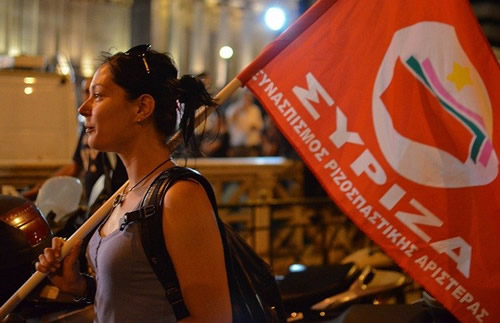 We here publish the second part of Stamatis Karagiannopoulos's article on the situation in Greece. The series was originally published in Greek on the website of the Communist Tendency of Syriza at the end of April this year.

The slide towards a new recession is interpreted by the bourgeois statesmen as the result of "political uncertainty" following the result of the last election, and the lengthy negotiation of the new government with the lenders. That interpretation is, in reality, probably not interpreting anything.

Certainly the political situation can exert a certain influence over the capitalist economy, particularly by defining the variations of its different phases, except of course in the case when large and nonstandard political events are unfolding such as revolutions or counter-revolutions. But the situation in Greece in recent years shows that generally the opposite has been true. It is the economy that decisively influences politics.

The deep recession and the expansion of sovereign debt is the central factor which, from 2009 onwards, has created constant tension in the relations between classes, which is reflected by ongoing political crises and the rise and fall of governments, parties and leaders.

Despite the 'political uncertainty' of the last six months, we have to accept that there are not particularly abrupt or abnormal circumstances taking place in the country. The government of Samaras and Venizelos fell due to an expected political event (election of the new president of the Hellenic Republic) and rather late in the day, after having shown remarkable stability thanks to the decline of the great wave of class struggle in 2010 - 2013. The extended length of the negotiation between the new government and its lenders is also something that was expected, given the great gulf between the electoral commitments of SYRIZA and the demands of Greece’s international creditors.

Certainly these political events have further shaken confidence in the prospects for Greek capitalism among the strategists of capital. But this confidence was already deeply shaken because of all the features of this crisis, such as the huge state debt, the fragile banking system, the 'cracked' internal market etc., which existed before the current political uncertainty. All the indications of a new recession were present in the economy already, proving that further crisis was just around the corner.

Its arrival isn’t fundamentally caused by "political uncertainty". The cause is the very deep crisis of one of the weakest links of European capitalism and its inability to overcome that crisis, amid conditions of European and global economic slowdown and stagnation. In other words, it is the organic nature of the crisis of Greek capitalism which is to blame for recession. It is this crisis that constantly gives birth to "political uncertainty" in more and more extreme forms, which will inevitably reach at some stage the beginning of a proletarian revolution, and possibly also "extreme" intervals of reactionary rule.

The barbaric and humiliating demands of Greece’s creditors

From day one of the new government taking power, the people of the whole world have been watching a theatrical display of cynicism by the lenders against Greece. If someone considers the effects of such a performance on the lives of the working class and poor people of the country, the brutality and barbarism of such behaviour is immediately apparent..

All the representatives of international imperialism and all the political wings of the international bourgeois camp have been aligned in a multifaceted attempt to strangle the democratically expressed will of the Greek people and prevent the abolition of austerity politics and the hated Memorandum.

The case of the Greek memorandum is one that demonstrates, more clearly than any other, the spurious character of bourgeois democracy and the incompatibility that exists between genuine democracy and capitalism. If, for ordinary working class people, such a realisation does not cause any particular impression nor constitute a valuable political lesson of life itself; for the reformist leaders and intellectuals of the Left, who in previous decades had made the whole purpose of their existence the defence of the "democratic and social acquis communautaire" and the embellishing the capitalist EU and its mechanisms, the shock must be particularly strong and unbearable.

All the reactionary lackeys of international capitalism are playing their own economic and political games on the back of the misery of the Greek working people. From the cynics Merkel and Schäuble, to the millionaire bureaucrats of the troika, to the pseudo-democratic Obama and Putin, as well as the ruthless bourgeois bureaucratic clique in Beijing. Together they seek or simply expect, the earliest possible submission of the new Greek government in order not to disturb the fragile state of the global economy.

What is not disputed by any of these parasites is that the first and last word on the Greek question belongs to the dominant power of the Eurozone, Germany. No national bourgeois representative wants to challenge the substance of the German ruling class policy which can be summed up in the doctrine "merciless pressure until the end."

In reality, Schäuble and his friends do not negotiate. They show their fists from the first moment, exploiting the plight of Greek capitalism and the financial dependence of the Greek state and the banks themselves. The analogy that could be used to better understand the essence of the current "negotiation" is that of a well armed besieger who lays siege to a decrepit rebel, cutting access to food and water, waiting cynically for the enemy’s exhaustion and inevitable submission.

The besieger is "negotiating" by making full use of his power; he doesn’t just want submission, but humiliation of the rebel. He wants in this way to make an example for the other aspiring rebels, ie the European working class and particularly the Spanish proletariat as it prepares to elect PODEMOS, its own SYRIZA, to government. At the same time, he seeks to send an indirect message of power to his partners, who might have their eyes on a greater share of economic and political power within the EU and the Eurozone.

balance sheet of the “negotiations”

We are now in the crucial final phase of what are improperly called "negotiations", and it is now becoming clear which side has been defeated and which is close to victory.

All Greece’s creditors - the bourgeois governments of the European Union together with its Directorate and the IMF - are calling on the government to implement the "reforms" detailed in the Agreement of February 20, which includes cuts in pensions, privatisations, tax increases, deepening employers’ power, etc. Not one of the international bourgeois governments has shown practical support for any of the key positions of the Greek government. Obama asks for total acceptance of the "reforms". Putin does not seem at all willing, in conditions of a growing impasse of Russian capitalism, to lend to a bankrupt country. Nor does he want to, for the sake of the Greek economy, endanger his relations with Germany. The famous cash advances of the Russian gas pipeline «Southstream» - of an amount insufficient to address Greece’s financial problems – has not been confirmed by any official source. Finally, the Chinese bourgeoisie, having taken little part in buying Greek Treasury bills despite the Greek government’s expectations, have shown that they cannot even remotely be considered a strong ally of Greece in the 'negotiations'.

The recent Eurogroup meeting in Latvia painted a clear picture of the international isolation of the Greek government at the hands of all the bourgeois governments of the Eurozone. The Greek finance minister was sneered at in a very demeaning way by some of his peers. He was charged with "amateurism" and "a sense of recklessness". Three months after the beginning of the "negotiations", the government’s initial hope of breaking up the unity of the "European partners” out of fear of a Grexit seems to be further away than ever from fruition.

Of course the government insists that it is "optimistic about an agreement", stressing its "red lines" on the issues of pensions and labour relations. Following the meeting between Tsipras and Merkel on the fringe of the Eurogroup meeting, they sought an interim agreement on the remaining open issues, such as the level of the primary surplus, privatisations and the establishment of an independent revenue secretariat, on which they appeared to be close to an agreement with the creditors. The government’s aim is to receive a tranche of the unpaid loan instalments to address the pressing problem of liquidity and bring the “red line” issues to a later deal in June.

However, the closing statement of yesterday's Eurogroup precluded such an arrangement. And this is very natural. A cash injection to Greece for the country’s immediate needs would negate for a while the big advantage of the creditors in their attempt to subjugate the government, i.e. the threat of financial catastrophe. The more the Greek state cash reserves "dry up", the more assured is the subjection and humiliation of SYRIZA. The creditors couldn’t therefore be expected to deviate from this practice and to give the Greek government room to manouevre.

How did we reach this dead-end in the “negotiations”? Did the government make any serious “negotiating” mistakes? Undoubtedly there are significant aspects of the government’s “negotiating” tactics that were ill-advised to say the least and seem to have seriously worried those who want a deal more than anyone, ie the Greek bourgeois. Indeed from a bourgeois point of view, it cannot be reasonably explained why the government put its signature on the February 20 agreement which did not provide for any financial disbursements. From the same perspective the opening of relations with Russia incurred the hostility of US imperialism, which the government had previously attempted to win over to its side in the course of the negotiations. Then without having achieved any practical substantial advantage from these new relations with Russia, they were dropped in a rushed way. None of this made any sense.

But we are the last ones to approach the "negotiations" from this point of view. The Communists see things from the perspective of working class interests. From the standpoint of the interests of the ruling class and Greek capitalism the "negotiations" were conducted in an amateurish way and without a clear strategy. From the perspective of the working class however it was a game lost from the beginning, a process with an easily predictable result.

The Communist Tendency of SYRIZA was the only section of the party that clearly and publicly warned about the dead-end of the attempted negotiations with the troika as a means to serve the interests of the working class and the poor. We stressed in dozens of articles that a deal means recognition of the predatory debt and debt servicing obligations and that the financial dependence of Greece on the troika creates an overwhelmingly unfavourable correlation of forces in favour of the latter, which may not be changed by any clever technical ideas or negotiations.

We explained that adherence to the negotiation would render impossible in practice even the modest aim of writing off a big part of the debt and the implementation of any of the radical measures of the SYRIZA programme. And finally, in an attempt to understand this obsession of the SYRIZA leadership with the negotiations, we in the Communist Tendency warned the militants of the party of the possibility that the alleged need for negotiation would become the alibi for the full acceptance by the party of the role of administrator of the crisis of Greek capitalism.

Unfortunately, the Communist Tendency, can now pride itself on the insight of its estimates and forecasts.