Details
Stamatis Karagiannopoulos in Athens
13 May 2015 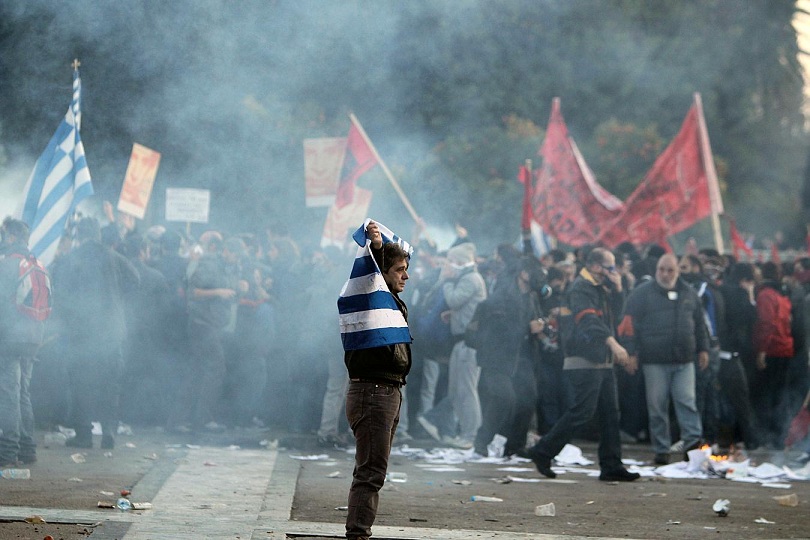 SYRIZA and the Independent Greeks (ANEL) have just completed three months in government in Greece. The economic, social, and political situation in Greece is characterised by the worsening of the profound crisis of Greek capitalism, and by the increasing intransigence of the foreign creditors. Its fate is being sealed by the shattering of the delusions of the new administration with regard to the possibility of breaking with austerity and memoranda within the framework of bourgeois politics.

The economic and political uncertainty that is presently increasing, in the final analysis, reflects the inability of Greek capitalism to overcome the deep slump it is in. According to IOBE [i.e., the Foundation for Economic and Industrial Research] there was a 26.4% drop in GDP between 2008 and 2013. After about a year (2014) of anemic recovery (a meagre 0.8% growth), which was due to a rise in the tourism sector, the Greek economy according to Standard and Poor’s has entered a new recession by 1%. The reappearance of the recession is compounding the existing precarious state of Greek state finances according to the latest data for 2014 by the Greek Statistical Authority. The primary surplus (i.e., what is left of state revenue after servicing state debt) was only a third of what had been predicted by the ‘Memoranda’ [i.e., the lending agreements with the IMF, ECB, and EU Commission]: namely, 0.4% of GDP or 630 million euros. The target was 1.5% of GDP. Once again we witnessed state expenditure (88.3 billion euros) exceeding state revenue (82 billion euros) thus amounting to a further deficit of 6.3 billion euros (or 3.5% of GDP) to public finances. Consequently, the public debt now amounts to 317 billion euros which, in relation to GDP, now stands at 177.1%; an increase over 2013 figures (175%).

We should not forget that 2014 was the year during which all the measures introduced under the Memoranda to strengthened the impunity of employers and their ability to over-exploit their labour force, came into full fruition. This was to ‘strengthen competition’ and was supposed to lead to increased investment, new jobs, and economic development. However, 2014 far from being a prelude to ‘development’, proved to have actually paved the way for a further slump. In effect, this means that millions of unemployed and their families are denied any realistic way of improving their circumstances any time soon.

Might it not be that the growing inability of Greek capitalism to provide jobs to the unemployed could in some way be countered by a policy of tax cuts and of cuts to public services? When financial data suggest the continuation of a recession and therefore a worsening of state finances, the only thing one could expect from a government managing capitalism is to seek more revenue from taxes and from new cuts. One does not have to be an economist to understand that in order for the government to achieve the target of increasing the primary surplus from the current 0.4 % to 1.5% of GDP – which seems to be commonly accepted by the government and by the lenders – it would be necessary for the government to take further measures to address the deficit.

The government currently is reassuring us that any such measures are to be ‘socially fair’. Even if that were to be the case – highly unlikely given that the country’s lenders have a definitive say in its economic policy – the assumption of a new series of ‘socially fair’ measures presupposes the continuation of previously ‘socially unfair’ measures (namely taxes, public services cuts, and so on) taken with regard to the Memoranda. Therefore, even if negotiations were to go exactly in the direction that the government desires, the current hopeless situation for the masses of workers and other impoverished layers seems to remain for the coming months. This would practically cancel the public mandate that the government received on 25 January (2015 election day) to end austerity and abolish the memoranda.

Even preserving the current levels of misery would appear a luxury the system cannot afford. The global economy is slowing down and coming to a standstill, whilst the broader field that affects Greek finances - namely, the EU and the Eurozone - is also in recession, which exacerbates the state debt and deficit issues. Any ‘quantitative easing’ on the part of the ECB merely delays the entire process by technical means. It temporarily makes borrowing cheaper, but neither does it reduce the debt nor does it compel capitalists to invest in a market which has become ‘narrower’, as a consequence of the crisis and which remains exposed to enormous levels of state and bank debt.

If to this bleak global environment for Greek capitalism we add the problems that flow from preserving the enormous state debt – including the prohibitively high interest rates on borrowing, the exclusion of Greece from ECB’s new programme of purchasing state bonds, the total dependence of the Greek state on European and international state and inter-state entities for liquidity, the continuous threat of bankruptcy, and the fragile situation of the Greek banking system and its total dependence on the ECB’s liquidity provision programmes – then we realise that the general financial outlook for Greek capitalism is entirely ominous.

On such an unstable basis, any economic ‘accident’, however small, is not only possible but is also inevitable: from the collapse of large enterprises, banks, and insurance and pension funds, to the partial or total suspension of state payments, bankruptcy, and the obligatory exit from the common currency. Whilst the objective inevitability of these matters can be delayed, they cannot be cancelled, not even with the most successful negotiating tactics on the part of the government towards the creditors. The current suspension of payments to state providers and to those entitled to certain state allowances and to tax rebates –along with the desperate move on the part of the government to take over the surplus funds from state bodies and local organizations by way of the ‘Acts of Legislative Content’ in order to service the debt, illustrates how close we are to such an ‘accident’  leading to an open and disorderly state bankruptcy, which, on the basis of capitalism, will be shouldered by the working masses with new waves of impoverishment and misery.

Comrades of the SYRIZA leadership are accustomed to deriding the Communist Tendency’s patient defence of an anticapitalist-socialist programme with their metaphysical aphorism that: “this isn’t the time for socialism”.  We – the communists – respond in this way: “life itself indicates exactly the opposite to what you claim! Never has capitalism been so incapable of satisfying even the most basic of human needs, and never has socialism been so necessary to satisfy those needs”! The fact that the voice of SYRIZA’s communists is incomparably weaker than those of the leadership’s ‘celebrity’ ministers does not mean that our positions, perspectives, and warnings are incorrect. On the contrary, these are the only positions that are based on a realistic evaluation of reality and of the prospects of a system doomed to go from crisis to crisis.

Unfortunately, the comrades at SYRIZA’s leadership, by assuming the task of managing capitalism, have chosen to perch themselves on a ‘decaying branch’. Thus, their consequent fall and the worsening of the situation for the Greek masses is not going to be an ‘accident’ but a natural consequence of their social-democratic delusions regarding the possibility of a ‘progressive’ management of capitalism. It is only through a socialist programme that they could avoid such an outcome (see the socialist programme of rupture that the Communist Tendency proposes). The more the leadership fails to move towards that direction the more it moves towards the direction of assuming austerity measures and of signing additional memoranda.