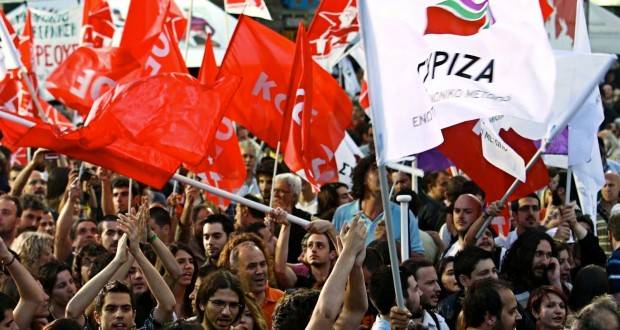 In the context of the present - both predictable and to be expected - generalised climate of political confusion, disillusionment and low expectations, the majority of the electoral base of our party, tends to accept the coalition with the Independent Greeks as “reasonable”, arguing that, given the refusal of the leadership of the Communist Party (KKE) to cooperate with Syriza, "there was no other way" of forming a stable independent Left government. But is this really the case? We think not! 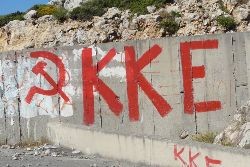 Firstly, it is clear to all that the KKE leadership is chiefly responsible for the fact that a self-standing Left government was not realised. At a time when the working masses shifted massively to the left on the electoral front, giving a majority - even absolute majorities in the urban centres - for parties that come from the Left and the communist tradition, the KKE leadership refused to take advantage of this mandate to bring into being a government that could govern in favour of working class's interests. Thus, they have behaved like a modern Pontius Pilate, failing to put forward elementary programmatic demands that would serve to reveal to the mass of the people the superiority of communist ideas. With this sectarian approach, not only did they not "unmask" the SYRIZA leadership, but instead they gave them the political excuse to make overtures towards so-called “allies” in the bourgeois political camp.

Alexis Tsipras, leader of Syriza (Right) and Panos Kammenos leader of Independent Greeks (Left)However, this unacceptable position on the part of the KKE leadership from a class perspective in no way justifies the SYRIZA leadership's choice to cooperate with a bourgeois nationalist party which forces SYRIZA to accept the Independent Greeks’ "red lines" that will prevent the carrying out of any fundamental Left, radical measure by the government. Instead, the SYRIZA leadership could have adopted a line that would have resulted in the formation of an independent government of the Left. This should and could have included the following:

1st: The KKE leadership did not rule out voting in favour of whatever pro-worker and anti-austerity measures would be put to the vote in parliament. In fact, the KKE was forced publicly to accept this. In that sense, the SYRIZA leadership could call on the KKE - not in the abstract, but on specific issues and within mutually agreed time frames - to cast a vote of confidence for a SYRIZA government, for instance on all the pro-labour measures contained in the Thessaloniki programme, together with any other fundamental measures that the KKE were to propose.

2nd: Naturally, a SYRIZA request for a vote of confidence on the part of other parties could also be addressed to the Independnet Greeks, but without forming a coalition government with them. That would have been the first real test of the - superficial, demagogic and inconsistent in our view - "anti-memorandum" stance of the Independent Greeks.

3rd: Even if the KKE leadership were to deny SYRIZA this very specific and temporary programmatic agreement and vote of confidence, SYRIZA should have then immediately called new elections. By consistently and patiently defending the need for an independent Left government and, basing themselves on the considerable popular momentum in favour of SYRIZA, particularly in the main urban centres, the SYRIZA leaders would increase the party’s vote and be able to govern with a comfortable parliamentary majority.

Such a stance would have shown in practice that SYRIZA was taking genuine, honest and reasonable steps, rather than making empty gestures, towards a coalition with the KKE. However, what did the SYRIZA leadership do instead? In his speech on election night, our comrade Premier made no specific appeal to the KKE. The overall public stance  of the SYRIZA leadership appeared to be one that placed on an equal footing any potential cooperation with the KKE, with the bourgeois neoliberal pro-austerity/memoranda "River" party or with the bourgeois right-wing, populist, anti-memorandum Independent Greeks. This, however, was only a formal stance as it was evident that the SYRIZA leadership were already prepared to form a coalition government with the Independent Greeks. This was undoubtedly greatly facilitated by both the KKE's sectarianism and the pressure of the bourgeoisie. At the same time, the SYRIZA leadership have hypocritically presented any recourse to new elections as a "political anomaly".

The Communist Tendency of SYRIZA in yesterday’s (26/1) statement has publicly expressed and argued its disagreement with the choice of a coalition with the Independent Greeks. This is an unfortunate choice and above all it is politically incorrect. Creating a coalition with a right-wing, nationalist party that publicly presents itself as the guardian of the bourgeois establishment against the "excesses of the Left," when it is still possible to form an independent Left government is a big mistake.

We fully understand why ordinary working people who voted for SYRIZA, see the Independent Greeks as a "necessary anti-memorandum" ally. The confusion and illusions of all these people, however, will quickly dissipate on the basis of their experience of the events that will unfold.

However, we must honestly say that for the leadership of our party, cooperation with the Independent Greeks does not represent the same thing. For the present SYRIZA leadership, it is an excuse to avoid the radical responsibilities that an independent Left government would give rise to, and it is also a further means of reassuring the Greek ruling class, in a process of reconciliation with the latter's economic and political power.

Unfortunately, at this critical moment, when the leadership of the "Left Platform" [the left wing of SYRIZA] should have put up the greatest resistance to the damaging cooperation with the Independent Greeks and should have consistently defended the need for an independent government of the Left, it has turned a blind eye and has entered the government coalition with the right-wing, populist bourgeois gang that are the Independent Greeks.

The Communist Tendency invites all Left-wing activists of SYRIZA to resist all the talk of the “inevitability” of an alliance with the Independent Greeks and to fight together for the following: