Share
Tweet
Since the collapse of Stalinism in Eastern Europe the whole region has become a field of investment for western capital. Austria has invested big time in Central and Eastern Europe (CEE). Now however all the contradictions are mounting up and from a source of stability the region could become a source of instability. Here we provide a brief comment on the economic situation of the CEE region.

In recent history Austrian capitalism achieved one of the best economic performances across the European Union. The decisive reasons for this remarkable growth in times of general economic turbulence have been the big opportunities for investment into the so-called emerging markets of Central and Eastern Europe (CEE).

The capitalist restoration of Eastern Europe created a field of investment for Western imperialism. This provided capitalism a certain breathing space by transferring large amounts of capital assets into the CEE region. Banks, insurance companies, Telecommunications, etc., were acquired by foreign corporate groups and are now almost entirely in the hands of Austrian or German owners. This indicates again that the Western economies are part of highly complex integrated world economy and therefore vulnerable to external shocks. A real estate or credit crunch in important Eastern markets would hit Austrian capitalism very hard. So, what about the performance of the CEE? Is there any evidence of an approaching capitalist crisis?

Beauty is only skin-deep: the economic performance of CEE

In its recently published Global Financial Stability Report (GFSR) [1], the International Monetary Fund warned of overflowing current account deficits and the excessive indebtedness of private households. The current account balance takes into consideration the difference between all imports and exports of goods and services in a country. Hence a deficit is the monetary expression of imports exceeding exports and therefore a loss in capital stock. The growth in current account deficits in some countries between 2005 and 2007 can be seen clearly in Table 1.

But there is another problem that is starting to attract attention in Eastern Europe, and that is a slowing down of the rate of GDP growth in these countries. Bourgeois economists can accept a degree of inflation if it comes with economic growth. They say that in times of low interest rates and booming investment levels, wages and prices of goods rise in a healthy proportion. But these same economists start to get worried when they see rising prices while the growth rate starts to slow down. Although growth rates in these countries are still relatively high, the direction seems clear. If this continues we will see the old phenomenon of stagflation creeping into Eastern Europe as well. The combination of stagnation and inflation became known as stagflation, a phenomenon that emerged at the time of the 1973 oil crisis. In Table 2 we see GDP growth rates, inflation and unemployment in some CEE countries. What emerges clearly from these figures is that while growth rates are beginning to slow down, the opposite is the case with inflation.

Hungary is a clear example of this process. In February The Economist wrote: "Hungary has the lowest growth and the highest inflation in central Europe [...] If America has stagflation-lite, Hungary has stagflation-heavy." [2] The problem is that it is not only Hungary. Many more countries are moving in the same direction, with a slowing down of GDP growth, increasing inflation and unemployment.

This process seriously affects the Eastern Europe working class. To maintain the same share of national income in 2008 which they had in 2007, workers in Bulgaria would need wage increases of over 15 percent (GDP growth plus inflation) in a situation where 5.9 percent of the population are unemployed.

The Austrian newspaper Die Presse is particularly worried about the Baltic States: "Especially the Baltic States could suffer a hard landing. Latvia's economy, which grew by a stunning 10.2 percent in the previous year, may almost stagnate in 2009. Lithuanians and Estonians have to expect tough times as well." [3]

The high rates of GDP growth in the Baltic States could only be achieved through the inflow of credits from Swedish banks. But in 2007 these reconsidered their credit policy and started to pull capital out of this region. Hence the Baltic States are more and more affected by a credit squeeze which is impacting on consumption and production and boosting the current account deficit.

But also the other CEE countries are experiencing an excessive expansion of credit. In Bulgaria the total sum of private loans grew 62 percent and in Romania by about 60.4 percent only in the last year. In the Baltic States indebtedness grew 45 percent and even Poland with 39 million inhabitants managed to enlarge the volume of liabilities to the amount of 39.4 percent [4]. Of course this process has its limitations as we can see in Spain or Britain, where we are witnessing massive cuts in consumption and mortgage loans. The credit-lending bonanza in the CEE region was mainly financed by Austrian banks. According to the GFSR many of these banks have built up negative positions which could lead to a hard landing for the Eastern European economies by reducing further credit and increasing interest rates. This would lead to an increasing number of insolvent loans and financial problems for the lenders.

To get an idea of how bad the situation really is, we can compare the CEE with some countries that have experienced a financial crisis. One of the most famous crises was the Asian financial crisis in 1997. According to Wikipedia: "Many experts see the exorbitant investments, excessive amount of credits, trade balance deficits and the weak regional financial market regulations as the reasons for the crisis in 1997/1998 in the Asian region." [5]

If we look at the given figures it's as if history were repeating itself with the deregulation of the financial markets in Eastern Europe. Just to show how unstable the situation has become we can make a comparison with those Asian and Latin American countries that suffered financial crises in the past and look at the position they were in one year before the crisis started there (of course we need to remember that analogies are useful but do not mean things will happen in exactly the same way).

If you compare these figures with the CEE today there are reasons why the bourgeois should be alarmed. Bourgeois economists assume that a current account deficit of four to five percent of GDP indicates that a financial crisis is looming. Of course current account deficits are only one economic indicator that point to financial instability. However, some economists have calculated a series of other factors indicating similar problems. [6]

How would Austrian capitalism be affected by a credit crunch in CEE?

There are many elements that reveal highly complex connections between Austria and CEE. First, its trade with CEE has soared over the past decade and a half, helping to reduce its trade deficit to manageable proportions. Second, and more importantly, Austria's stock of direct investment in Central and Eastern Europe shot up from almost nothing in the early 1990s to nearly 19 billion Euros in 2004, equivalent to 8 percent of Austria's GDP [7], as is shown in Figure 1. 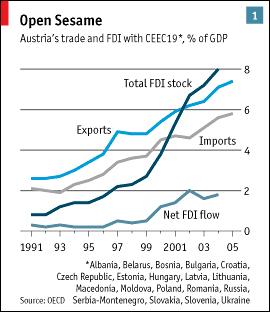 The type of Austrian investment has changed in the last decade. Whereas former business activities were concentrated in manufacturing, nowadays the biggest share flows into the financial sector, property and services. The contribution of business in the CEE to the profitability of Austrian banks in 2005 was unprecedented. As a press release of the Austrian National Bank states: "While domestic business has slightly recovered, Austrian banks particularly benefit from a substantial rise of loans and persistent high profit margins in Central and Eastern Europe." [8]

Even the IMF has paid attention to the Austrian banks. These would be considerably stronger, depending on CEE business, than their peers from Germany, France or Italy. To make a comparison: Austrian financial institutions have 23 percent of their assets in the CEE, whereas for Scandinavian banks this amounts to only 10 percent. All other Western financial institutions are insignificantly active in the CEE. [9] Moreover Austrian banks operate in 16 Eastern states and in 2005 they generated a stunning 42 percent of their operating results from the CEE. [10] All these figures serve to show how dependent the Austrian financial sector is on the stability of the CEE economies. And they also show how vulnerable Austria is to financial instability and crisis in these countries.

We can ask the question: what would happen, if one day the outstanding private loans cannot be paid back? Unfortunately an estimation of the share of subprime loans as a percentage of total credit lending is not easily available. In the United States subprime loans were about 15 to 25 percent of total overall loans. However, it would not be surprising if a similar figure were to emerge for CEE debtors. As socialists we are not particularly concerned about the profits of the Austrian banks. What we are concerned about is the plight of those thousands of workers who would be affected by the impossibility of paying back their debts, thus losing their homes and what is left of their wealth.

From all the above facts and figures one can see to what extent the CEE region is facing a high risk of an upcoming financial crisis. Of course one cannot have a mechanical approach in the way one presents the figures. Whether there will be a major crash we will see in the coming period. But these figures do indicate how unstable capitalism has become on a global level and how economic instability in one region can overlap into another.