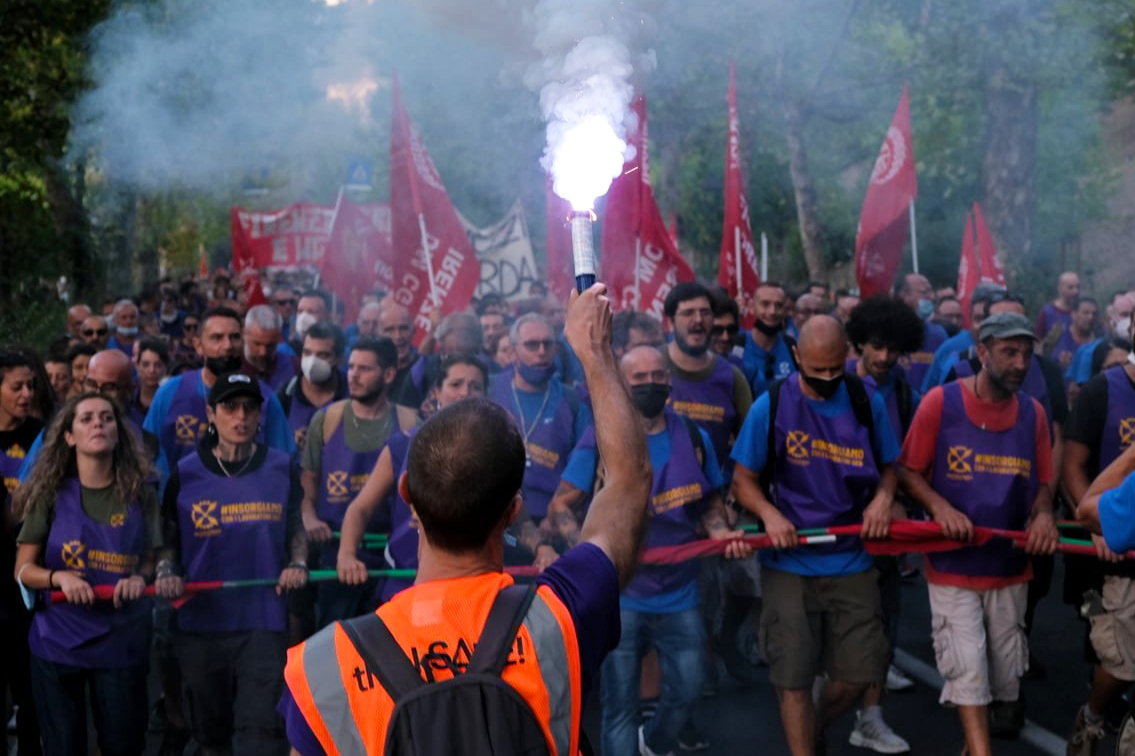 On 9 July 2021, 422 workers at the Campi Bisenzio GKN plant near Florence received a text message. It came from the British multinational’s management, communicating that the workers were immediately and collectively dismissed. However, the plant is not in crisis. There is a market for the production of drive shafts and other components for the automotive sector that the plant is capable of producing. So why the sackings?

The answer is found in the fact that Melrose Industries PLC bought up GKN in 2018. If you look at their website, they say that, “Melrose buys good manufacturing businesses with strong fundamentals whose performance can be improved.” So they themselves admit that GKN is a “good manufacturing business.” But they don’t limit themselves to “improving performance”. As they themselves explain, “Melrose finances its acquisitions using a low level of leverage, improves the businesses by a mixture of significant investment and changed management focus, sells them and returns the proceeds to shareholders.”

In plain English this means that Melrose is planning on asset-stripping the plant in Florence, cutting human resources – i.e. sacking the workforce – and relocating production elsewhere, where labour costs are lower, in order to maximise profits, or as they say, “return the proceeds to shareholders”. Up to the end of 2020, the Melrose group boasted of having returned £4.7billion to shareholders since its establishment. In all this, they have had not the slightest concern for the hundreds of families who suffer significantly when factories close and workers lose their jobs.

Melrose has also found a friend in the Italian government and in particular the prime minister Draghi, the former governor of the European Central Bank. When the pandemic hit Italy, millions of workers were at risk of losing their jobs. There was a very angry and militant mood among workers across the country. This was particularly evident among engineering workers. Under this pressure, the then Conte government introduced a freeze on sackings. The bosses reluctantly had to accept this. Later, however, Draghi came to their rescue. 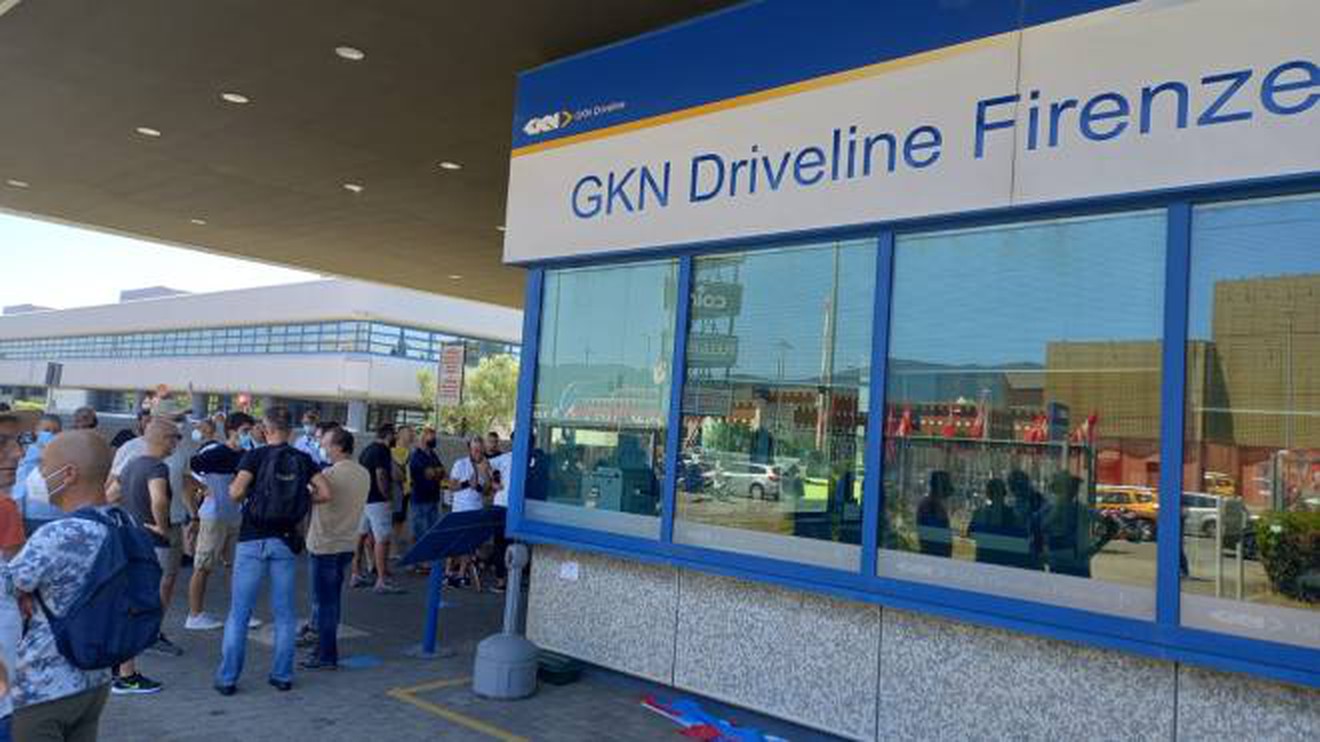 GKN workers outside the factory gates / Image: fair use

The Melrose multinational group was helped by the new Draghi government, which came into office in February 2021. Within just a few months, on 30 June, it removed the freeze on sackings, which had been in force since March 2020 when the Covid emergency began. What we have here is an example of “the bosses order, and the Draghi government obeys and carries it out”. This has been the situation in Italy for the last few months.

The case of GKN is not an isolated one. We have seen the same thing being repeated at Whirlpool, Timken, Gianetti Ruote, Elica, Blutec, Riello, which are just a few of the factories facing imminent closure. However, the bosses have encountered a problem: the workers everywhere have been fighting back against the closures. However, the fightback at the GKN plant in Florence and at the Whirlpool plant in Naples has been particularly militant.

The GKN workers were concerned that strike action alone would not be enough. They feared that the new owners would organise for the machinery to be taken out of the factory. So the workers took the decision to occupy the plant. Within a few days of the announcement of the sackings at GKN, there was a Florence-wide general strike and a demonstration of over 10,000 people that filled the Santa Croce square in the city. Two weeks later, a large demonstration, with similar numbers, marched through the industrial and working-class neighbourhoods around the factory. 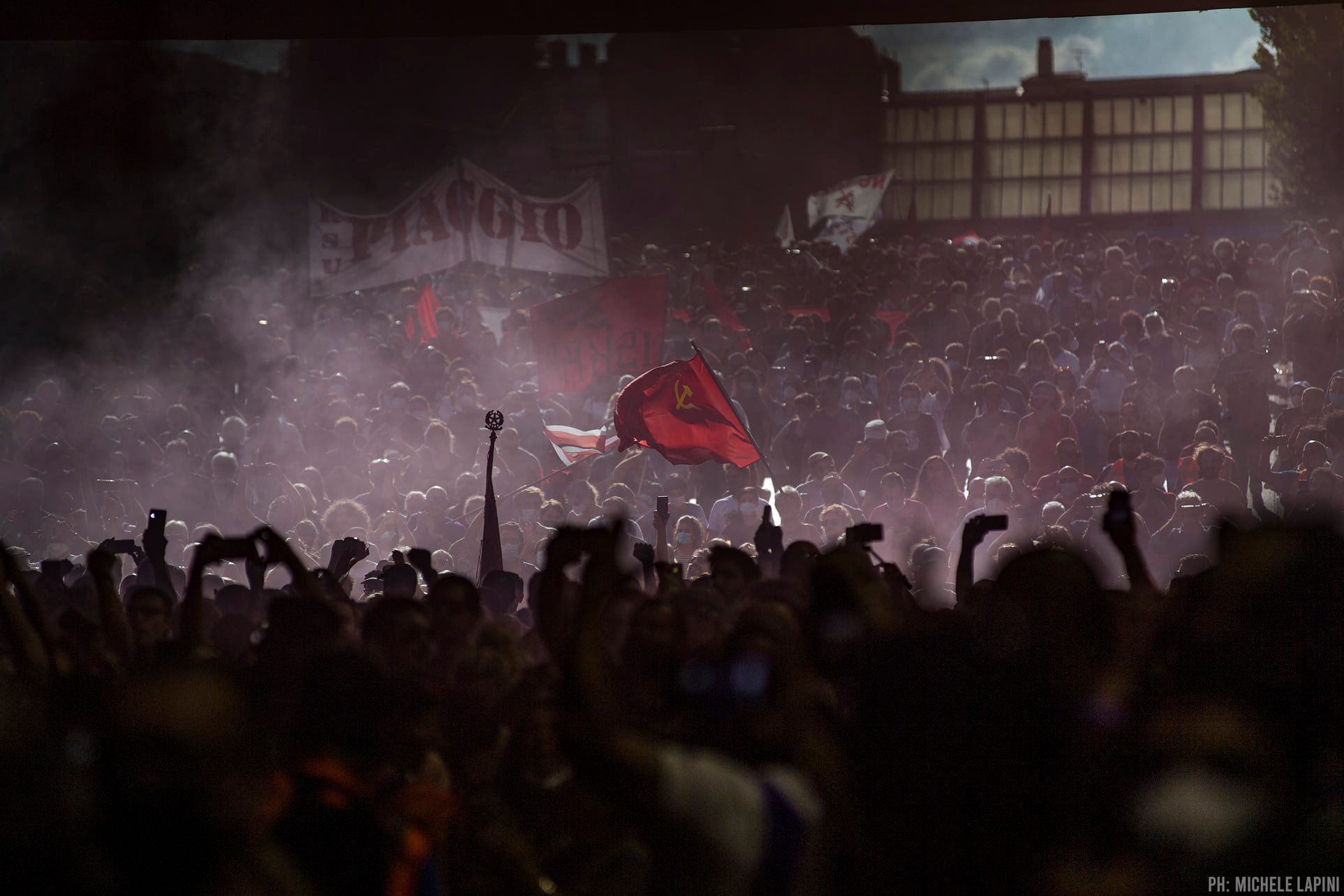 The struggle of the GKN workers in Florence has become an important point of reference for radicalisation in Italy. After the closure of their plant was announced, the workers responded with an occupation of the factory and a general strike and mass protests were organised in solidarity in Florence / Image: Michele Lapini

August is usually a month in which very little happens in Italy as it is the traditional holiday period. In spite of this, the struggle did not stop, and around 5,000 people flooded the streets of Florence city centre on 11 August (the day of the liberation of Florence from Nazi occupation in 1944) in solidarity with the GKN struggle. The GKN shop stewards and the factory action committee (the core of the most active workers) have been very good at mobilising the support of the city and the suburbs. Their slogan “Insorgiamo” (Rise up) has become very popular, and not only in Florence.

The final deadline for the implementation of the sackings, 22 September, was rapidly approaching. Management was determined to push ahead with its decision. The government meanwhile was making vague promises. The union leaders, meanwhile, had utterly failed to promote a united front of all the factories in crisis.

The working class in Italy is making its voice heard again. And while it is true that we are not yet seeing a generalised movement, we can see that below the surface there is enormous anger that could explode at any moment. What is holding it back, for now, is the lack of a fighting trade union leadership.

However, in spite of this total lack of leadership from the national union leaders, on 18 September, a huge demonstration of at least 25,000 workers and youth, flooded Florence city centre yet again. It was a very lively and militant demonstration – probably one of the biggest we have seen anywhere in Italy since the end of lockdown. 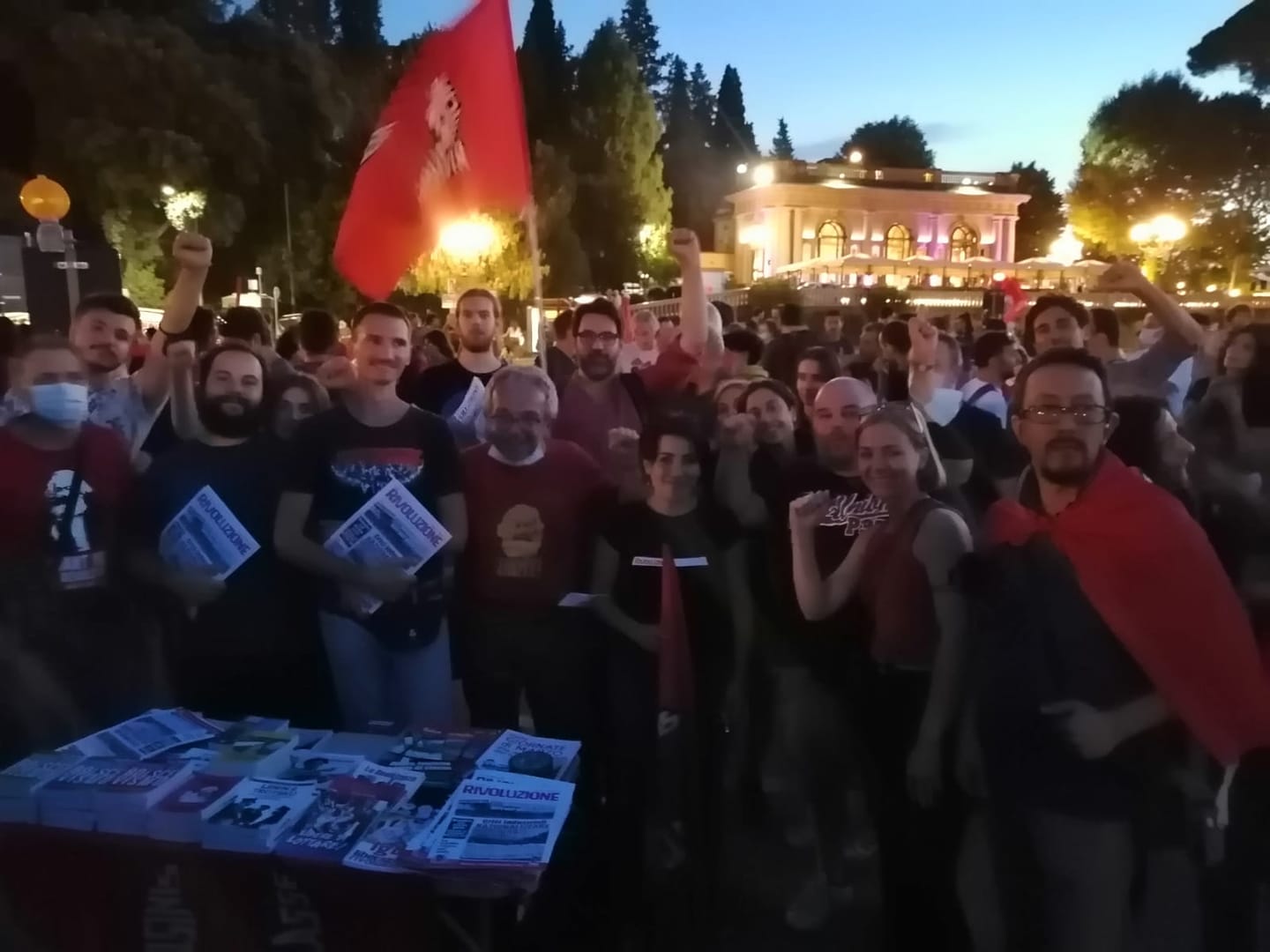 Militant slogans were chanted throughout the march, calling for strike action and solidarity. As the demonstration filed past, there was tremendous applause from people on the balconies of their flats looking down. Militant class struggle stamped its mark on the day in one of the most famous tourist cities in the world. At the end of the demonstration, in one of the final speeches, one of the leaders of the shop stewards’ committee made an appeal to the CGIL [General Confederation of Italian Workers, the equivalent of the TUC in Italy] to unite the various disputes and call for a general strike. The audience answered with a huge ovation.

What followed shows that all-out, militant workers’ action pays off. The workers at the plant have been piling on the pressure and spreading their influence among the wider population. On Monday, 20 September, this forced the judges to decree that Melrose was guilty of anti-union behaviour, violating article 28 of the Workers’ Statute, a law passed back in 1970 that gives workers’ a certain degree of protection against unjustified sackings.

This was a clear victory for workers at GKN in Florence, and it has boosted the morale of the striking workers. However, the judge’s ruling does not resolve the matter once and for all. Whilst he has halted the sackings – for now – at the same time he reaffirmed the right of the company to close the plant and simply pointed out that the closure and consequent sackings had to be negotiated with the unions. Again, we see how the law is not the same for everyone – in the final analysis, it defends the interests of the bosses.

The union leaders have made an appeal to the government to intervene in the dispute. But the government is not impartial. Draghi has stated clearly that, in order to come out of the crisis, some factories (the “weakest”, the “less competitive”) will have to be closed. The unions are asking the government to introduce a law to prevent relocations. Orlando, the Minister of Labour, is about to submit a bill to parliament requesting that multinationals that wish to make redundancies give at least six months notice so that negotiations can take place, and to give the company time to rethink its plans or find a new buyer. There are, of course, no penalties or fines for those companies who relocate anyway, and no demands for the return of any government loans these companies may have received in the past.

Right from the very beginning, the union leadership has given Draghi a blank cheque, and the workers have so far paid the price for this. It is self-evident that, of its own free will, the government will not make any real concessions to the workers. Every victory must be imposed by militant strike action. There is no other way of forcing a capitalist to stay and keep open a factory if he thinks it is no longer profitable. 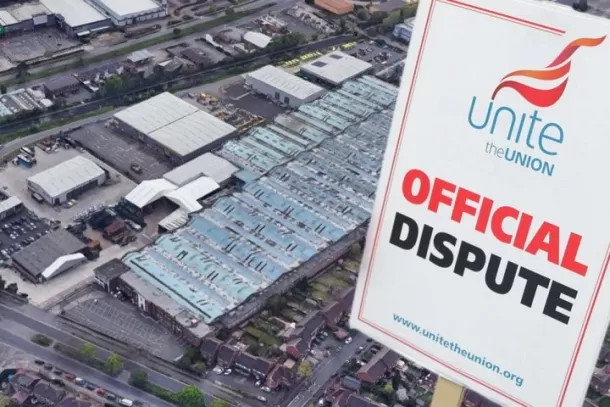 Like their brothers and sisters in Italy, GKN workers at the Birmingham Erdington plant in Britain are also facing the threat of closure by the same asset-stripping company / Image: Socialist Appeal

The workers of the factories under attack need to promote a coordinating action committee with the aim of organising a national meeting of worker representatives from the companies in crisis, with a clear programme. Such a coordinating committee would also have the task of controlling the union officials involved in the negotiations and making sure they abide by the demands of the workforce as a whole. Too many times we have seen very militant and courageous strikes literally betrayed by the union leaders who have signed off on rotten, watered-down agreements, or who have simply bent to the pressures of the bosses.

The union leaders nationally must take on their responsibility and call now for a general strike to defend jobs and stop factory closures. The judge’s decision has provided some time, but this time must not be wasted. The immense and widespread solidarity that exists among the wider working class towards the GKN workers must be used in a major showdown with the Melrose Fund.

We have now also heard of the latest developments in Britain, where Melrose is planning to close down the GKN Erdington plant in Birmingham, leaving over 500 workers without a job. The workers of GKN in Florence and in Birmingham are facing the same ruthless boss: Melrose. They share the same interests. What is needed is coordinated strike action to stop the bosses from destroying the lives of hundreds of workers in both Italy and Britain.