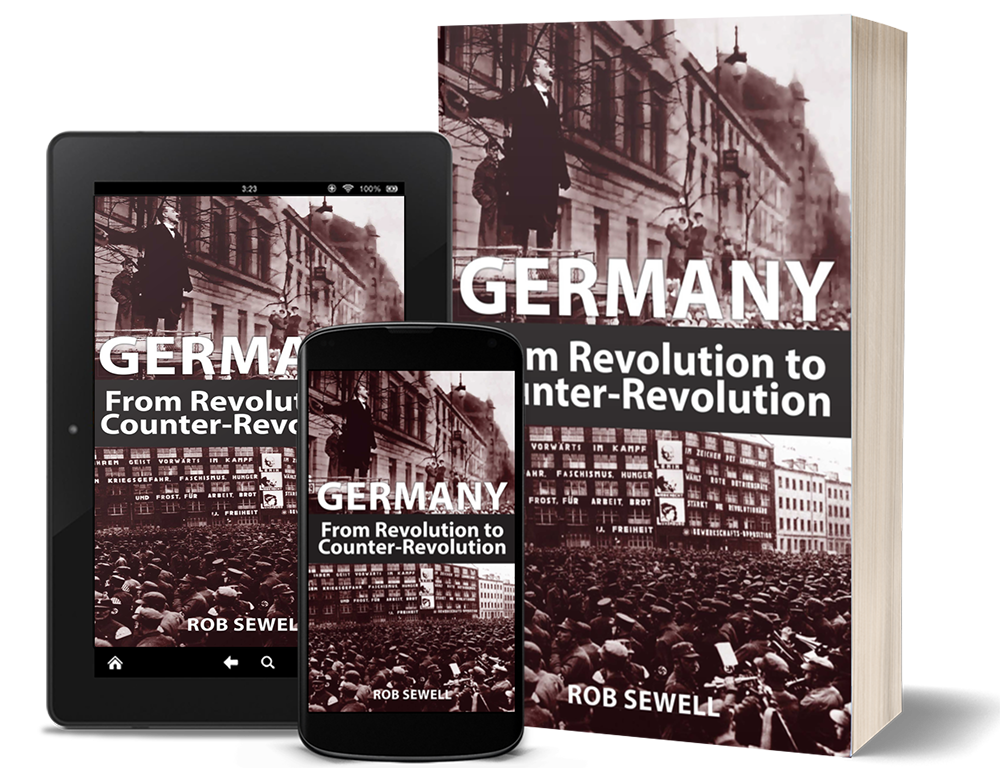 SPD - Social Democratic Party of Germany. Founded in 1875 following merger of Marxist and Lassallean parties - adopted this name in 1891. Was seen as leading Marxist party in Second International, with over one million members in 1914. Became Marxist in words, but reformist in deeds; support fell to 250,000 in 1918, but rose again to one million in 1919.

KPD - Founded 1918 by Spartacus League (see below) and the International Communists. Merged, with membership of 78,000, with the majority of USPD in 1920 to form United Communist Party (VKPD - later just KPD).

KAPD - Formed in 1920 by ultra-left split from KPD. It split and disappeared rapidly. The policies of some of its leaders were criticised by Lenin in Left-Wing Communism.

Spartacus laague - Grew from a revolutionary tendency in SPD in 1914 opposed to the war. Known as the Internationale Group from 1916; then as the Spartacus group (from the name of the leader of the most famous slave rebellion against Rome). With members that included Rosa Luxemburg, Clara Zetkin, Franz Mehring, and Leo Jogisches, they left the SPD, joining the USPD in 1917, and forming the Spartacus League as a public faction of the USPD in November 1918; they split from the USPD and formed the KPD in December 1918.

Third International - The Communist International (Comintern). The First World War put to the test the statements of the Second International about the international solidarity of the working class and their anti-war resolutions. Virtually every section - the most notable exception being the Russian - turned to support their own ruling class in the war effort. This split the International in nearly every country; the Russian Revolution gave impetus to the creation of a new International based on those groups who had stood out against the tide of chauvinism, and the Third (Communist) International was set up in 1919. At first the leading body of world socialism, it degenerated under Stalin, becoming a tool of the Russian bureaucracy, until ignominiously wound up in 1943.

SA - Sturmabteilung - the Stormtroopers, or Brownshirts. Set up in 1921 by Hitler as a paramilitary force, involved in street fighting and 'protecting' meetings. A force many thousands strong, they came to represent a threat to Hitler; many members wanted the 'second revolution' (the 'social' revolution after the 'national' one), and a journal known as Red SA circulated. The SA's own leadership and independence were finally liquidated by, Hitler and the SS on 30 June 1934, the 'Night of the Long Knives'.

SS - Schutzstaffel - the Blackshirts. Originally set up as a personal bodyguard for Hitler, was reorganised in 1929, later controlling the Gestapo (the Secret Police) and the concentration camps through its Death's Head units.

Freikorps - Set up by the old Army Command and paid by the government War Ministry, they were used by the Social Democrat Noske in 1919 to crush the revolution; they were right-wing mercenaries, led by Imperial officers. The Freikorps murdered Luxemburg and Liebknecht. Hitler took the Swastika from their insignia, and the SS the Death's Head.

Reichswehr - The regular army of Weimar Germany, made up of old units and the Freikorps, later to become the Wehrmacht.

Reichsbanner - Para-military wing of the SPD, set up in 1924, with over one million members by 1925. They could have provided a powerful force against Nazism, but the cowardice of the SPD leadership left them impotent.

Rote Fahne - The central paper of the Spartacus League, and then of the Communist Party.

Vorwaerts - Central paper of the SPD.

Eduard Bernstein - 1850-1932. Member of the SPD, first theorist of reformism within the Second International, in Evolutionary Socialism ; opposed war from a pacifist standpoint, but opposed to revolution. Briefly in USPD.

Heinrich Brandler - 1881-1967. SPD member from 1901, became leading member of Spartacists and, as chairman, of the KPD between 1921-4, where he stood on the right of the party. Expelled from KPD in 1929 as a supporter of Bukharin, after which he organised his own group, the KPO.

Hugo Eberlein - 1887-1944. joined SPD in 1906; opposed war in 1914. Member of Spartacus and KPD central committees. Was a delegate to First Congress of Third International, and played a leading role in the Comintern as a supporter of Brandler. He was exiled after 1933 to the USSR, where he was arrested by the GPU during Moscow purge trials. He was supposed to have been handed over to Hitler by Stalin in 1940, but died in prison.

Paul Froelich - 1894-1953. joined SPD aged 18; on extreme left of party; supporter of Lenin's position at Kienthal conference 1916; elected to KPD central committee at founding congress; active in Bavarian revolution. Expelled from KPD as a 'rightist' in 1928, he joined Brandier's KPO (the right opposition Communist Party Opposition), then of centrist SAP (Socialist Workers' Party). After nine months in a concentration camp in 1933, went into exile; returned to West Germany and rejoined SPD in 1950.

Max Hoelz - 1889-1933. Ex-metal worker, joined USPD 1918 and KPD 1919; organised armed guerrilla action against Kapp putsch. Sentenced to life imprisonment for organising fighting in Central Germany during March Action, he was released in 1928, went to Moscow and died in an accident in 1933.

Leo Jogiches - 1867-1919. Active in revolutionary movement from early youth; close collaborator of Luxemburg; founder of Polish revolutionary Social Democracy, and active in 1905 Polish revolution; escaped to Germany 1907; organiser of Spartacus group during war. A member of the KPD central committee, he opposed the January 1919 uprising, and was arrested and murdered by the Freikorps in March 1919.

Karl Kautsky - 1854-1938. Collaborator of Engels; founder and editor of Die Neue Zeit. Regarded as chief theoretician of Marxism until 1914, when he adopted pacifist stand, apologising for majority. Founder of USPD; supporter of right wing, and opposed socialist revolution in Germany; rejoined SPD 1922.

Paul Levi - 1883-1930. Member of SPD from 1906; revolutionary opponent of war; worked with Lenin in Switzerland during war; member of Spartacus League and KPD central committee, central leader after Jogiches's murder in 1919. Opposed ultra-left 1919, president of VKPD 1920; he resigned in 1921 and was expelled for publicly denouncing the March Action in 1921. Joined USPD 1922, then SPD, where he organised a left opposition until his death.

Karl Liebknecht - 1871-1919. Son of SPD founder Wilheim, joined party 1900. Set up Socialist Youth International 1907, and jailed in the same year for writing Militarism and Anti-Militarism. Reichstag deputy from 1912, first member to vote against war credits in December 1914. Founded Spartacists; jailed 1916 for anti-war agitation. Amnestied in 1918, he took part in preparations for November actions and led the Revolutionary Committee during Berlin January uprising. A leader of the KPD, he was murdered by the Freikorps in 1919.

Rosa Luxemburg - 1871-1919. Joined movement in Poland in 1887; exiled in 1889; leader of SDKP (Polish Social Democrats); joined SDP in Germany 1898; on Second International bureau from 1903; leader of left wing against revisionist right and, after 1910, against Kautskyist group; leading revolutionary opponent of war; founder of Spartacus group. In prison for most of the war, she became the chief writer for Die Rote Fahne November 1918-January 1919. Founder and leader of the KPD; she opposed the call for the January rising, although this was not reflected in her articles. Her arrest was ordered by the Social Democratic government for her participation in the uprising, and she was brutally murdered by the SDP-instigated Freikorps at the same time as Liebknecht.

Gustav Noske - 1868-1946. Right wing SPD leader; member of Council of People's Representatives 1918-19; minister of war in Social Democrat governments December 1918-March 1920; organised suppression of January 1919 uprising; resigned after the Kapp putsch and became president of province of Hanover until dismissed by Nazis in 1933; imprisoned twice by the Nazis, once in 1939 and once after Generals' Plot.

Karl Radek - 1885-1939. Active in Polish revolutionary movement from the age of 18; involved in 1905 Polish revolution; in Germany 1908, supported the SPD left. A member of the Zimmerwald Left bureau with Lenin in 1915, he joined the Bolsheviks in 1917, who sent him secretly to Germany in 1918; arrested February 1919 and freed January 1920; supported March Action, and supported calling off of October 1923 insurrection. He played a leading role on the Executive Committee of the Communist International. He became part of Trotsky's opposition to Stalin 1923-29, being expelled from the CP in 1927 and deported to Siberia. He capitulated in 1929 and became a major apologist for Stalin, but was arrested in 1937 during the Moscow frame-up trials and died in prison.

Philipp Scheidemann - 1865-1939. Right-wing SPD member, in Reichstag from 1898. Central leader of party after Bebel's death in 1913; led SPD support for war in 1914, and became co-chair in 1917. He was appointed minister without portfolio by the Kaiser in October 1918, and declared the republic in November of that year. A member of Ebert's Council of People's Representatives, he presided over the suppression of the 1918-19 revolution, becoming Chancellor in 1919. He was forced into exile by the Nazis in 1933.

Otto Wels - 1879-1939. Right wing SPD member; military commander of Berlin, responsible for crushing of left in January-March 1919. He led the opposition to Hitler in the Reichstag in 1933, calling for 'lawful non-violent opposition'; exiled in Paris from 1933.