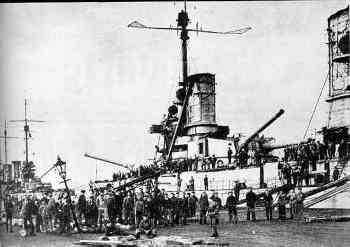 What passing-bells for those who die as cattle?
Only the monstrous anger of the guns.
Only the stuttering rifles' rapid rattle
Can patter out their hasty orisons.
(Wilfred Owen, Anthem for Doomed Youth) 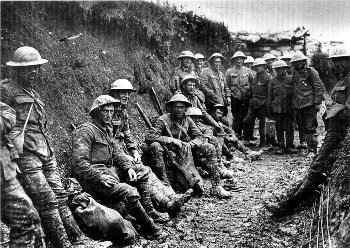 A picture of the trenches in which millions of workers died during World War I.

On the eleventh hour on the eleventh day of the eleventh month of 1918, the armistice took effect on the Western front. One year after the victory of the Russian Revolution, the German proletariat had entered the scene of world history and brought an end to "the Great War". Austria-Hungary soon followed suit and the "old regime" had collapsed.

Capitalism had reached an impasse in the early 20th century. The major powers were dominated by inter-imperialist conflicts between themselves and class struggle at home. The revolution of 1905 had not only shaken Tsarist Russia but strike waves in Germany and France had also rattled the previous peaceful climate. Economic stagnation in 1907-9 caused a temporary respite to the struggle but in 1910, the German workers were once again mobilising and the British workers followed them in striking in 1912, involving a million workers in both countries, the pre-war peak.

The struggles were not only economic: massive demonstrations of tens of thousands of workers were held against a war between the great powers and the mood that developed over the suffrage struggle in Prussia in 1910 was such that the leadership of the nominally Marxist German Social Democratic Party felt compelled to attempt to rein in the party membership. The period was one of increased radicalisation.

World War I and the working class 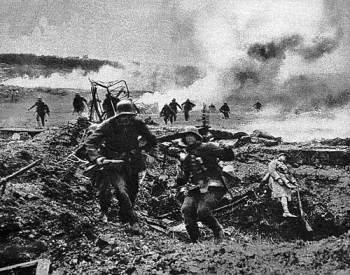 The temporary outbreak of national chauvinism quickly dissipated when the horrors of trench warfare became apparent.

World War I, a conflict between the great imperialist powers, cut across this wave of radicalisation.  Strike figures dropped significantly in the period 1914-1916. Black reaction was the prevailing mood in Europe. The leaders of the socialist international had capitulated to the bourgeoisie and voted for the war, with the exception of Russia and Serbia. The participants of the anti-war Zimmerwald conference of 1915, held in Switzerland, could, as they joked, be transported in two coaches.

The outbreak of the war had caused a temporary outbreak of national chauvinism and, even though it quickly dissipated when the horrors of trench warfare became apparent, the mood of the working class was initially one of shock rather than anger. Yet this was no longer the case in 1916.

In 1917, strikes and mobilisations picked up all over Europe. Germany, France and Britain all experienced serious strike waves in 1917. The working class was growing tired of the war and inflation was taking off. Furthermore food was rationed and hunger riots became commonplace. In Germany, which was worst affected, the rations had fallen to 1,100 calories per day (3,000 was recommended by a German war-planning commission). The war had reached a stalemate on both the Eastern and Western front and anger was seething.

When the German High Sea Fleet was ordered to sail in November 1918, the sailors refused and took control of the port towns.

The workers of Europe were sick of the war. In Berlin and Leipzig 200,000 workers struck in April and in Paris 250,000 workers struck in December. In 1918, 1 million workers struck in Britain. In Austria-Hungary a general strike mobilised 700,000 in January and half the war fleet mutinied the following month. The predatory treaty of Brest-Litovsk that had been forced upon the Bolsheviks after the Russian Revolution caused 1,000,000 German workers to down their tools. Europe was in flames.

Army morale was severely affected by this collapse of "the home front". The soldiers had lost their will to fight but letters from home, even though they were heavily censored, exposed the horrific situation in Germany. The commanders of the German army attempted a few last, desperate gambles.

In the summer of 1918, reinforcements from the Russian front had arrived and the German high command was attempting to achieve a decisive victory before U.S. troops landed in France. It turned out to be the straw that broke the camel's back. The previously reasonably disciplined German army fell to pieces and mass-desertions took place. It is estimated that up to one million soldiers decided to turn their back on the war and return home.

The high command became increasingly desperate. The high sea fleet that, for good reason, had been left in the ports since 1916 was ordered to sail on 28 October. The sailors refused to sail, took control of the city and set up a council, all on 3 November. They were joined by workers and soldiers in Hamburg, Bremen and Lübeck on 6 November and by Dresden, Leipzig, Chemnitz, Magdeburg, Brunswick, Frankfurt, Cologne, Stuttgart and Nuremberg on 7 and 8 November.

On the ninth, Berlin fell to the soldiers and workers who set up their council in the headquarters of the high command! On 10 November a joint meeting of the Berlin workers' and soldiers' councils appointed a new government of People's Commissars consisting of Social Democrats of various shades. The German Revolution had begun.

The German High Command now had to beg the allies for mercy. Their desperate gamble had failed and the unconditional armistice, previously rejected, was now signed. Lloyd George, Clemenceau and Wilson, all facing troubles at home were not inclined to be merciful. The allies retained the naval blockade as a means to be able to impose a draconian peace on the new German government. 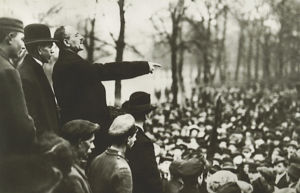 On the ninth, Berlin fell to the soldiers and workers who set up their council. Liebkencht spoke to an assembly of workers in Tiergarten.

In effect, the allies were keeping the German population on the brink of starvation. Before the war, Germany had imported something like 20% of its food. Partly due to incompetence and partly due to necessity, domestic production had also fallen dramatically during the war. The result was dire for the German population. The question that the generals and politicians asked themselves was how long French and British soldiers would let their German brothers and sisters starve.

The leaders of the allies had their eyes set on German gold reserves and capital. If Germany was allowed to import, it would inevitably pay with its gold reserves. That would mean less gold left to pay war damages. France, in particular, was keen on seeing these reserves handed over to the allies and opposed most strenuously the lifting of the blockade.

In a telling episode during the negotiations, retold ten years later by Keynes, the famous economist, Lloyd George got up and attacked the French Minister for Finance, Klotz. Lloyd George proclaimed that, unless Clemenceau put a halt to the obstruction, 'M. Klotz would rank with Lenin and Trotsky among those who spread Bolshevism to Europe.' According to Keynes Lloyd George argued that, 'as long as order was maintained in Germany, a breakwater would exist between the countries of the Allies and the waters of revolution beyond. Once that breakwater was swept away, he could not speak for France, but he trembled for his own country.'

The most far-sighted of the bourgeoisie in Britain and France saw the danger that revolution in Russia posed. Now Germany was also under threat and, unless checked, revolution could spread all the way to France and Britain. Yet at the same time, both the French and the British governments were highly indebted after the war and did not want to impose the repayments on their own working classes for fear of the effects.

In 1917, the Russian proletariat inscribed their name in the history books as the first successful workers' revolution and in November 1918 the German proletariat followed suit. The bourgeoisie of Western Europe were desperate to keep revolution from affecting France and Britain but they were divided as to how. In the end they opted to attempt to stabilise the German government and lift the blockade. That did not spell the end of the German revolution and it was to continue for another six years.