This year, the national congress of Der Funke (the German section of the International Marxist Tendency) was once again able to take place in person from 26-28 May. As last year’s congress took place online due to the coronavirus pandemic, comrades were all the more motivated and excited to meet in Berlin for a lively discussion after such a long wait. The congress was a great success and marks an important step in the building of the forces of revolutionary Marxism in Germany.

For many, this was their first chance to meet comrades from different branches in person, as the membership of the IMT in Germany has more than doubled since 2019. While in 2019 just 40 comrades took part in the congress, this year that number was around 90. This is a considerable success, which shows how effectively the organisation has used the opportunities flowing from the crises of the last two years (the coronavirus pandemic, economic collapse, the war in Ukraine etc.). Der Funke has come out of this period in a position of considerably greater strength.

The congress was particularly enriched by the presence of international guests, who came from a number of countries. Fourteen comrades travelled to Berlin from IMT sections in Austria, France, Switzerland, Poland, Denmark and Britain. They reported on the situation in their own countries and on their experiences in building the forces of revolution on the ground. 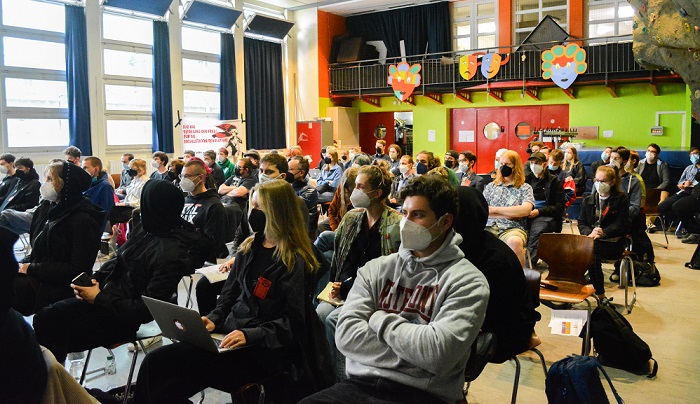 On Saturday morning, the congress was officially opened with greetings and the presentation of the agenda, followed by a discussion on world perspectives / Image: Der Funke

The congress officially began on Saturday. The first comrades arrived at midday on Friday to finalise preparations for the event, before the rest of the comrades gradually began arriving during the afternoon. It was a cheerful and sociable meet-up. Old friends and new comrades were cordially welcomed and introduced. The evening was spent in lively discussion and in high spirits.

On Saturday morning, the congress was officially opened with greetings and the presentation of the agenda. This was followed by a discussion on world perspectives. The situation around the globe has dramatically changed. War, crisis and the hypocrisy of governments are causing an increasingly rapid radicalisation among workers, and particularly among the youth. There are mass strikes and protests going on around the world, but reactionary movements are also flaring up. In the midst of all these events, it is important to maintain an internationalist and revolutionary class perspective. This is the only way to understand the general processes at play and to be able to act in the interests of the international proletariat. For Marxists, it is clear that it falls to the working class to overthrow capitalism and build a socialist society. But all current and previous attempts and movements (such as Kazakhstan, Sri Lanka, Chile etc.) teach us an important lesson: socialist revolution cannot be successful without a revolutionary leadership. For this reason it is all the more urgent to build the IMT.

The subsequent discussion began immediately with many contributions, including those from international comrades. These perspectives were greatly inspiring and enriching for those present, creating a mood of international connectedness and solidarity.

After this came a talk and discussion on the perspectives for class struggle in Germany. The situation in Germany is not as advanced as in other countries in this regard. But here too, the fallout of the organic crisis of capitalism is becoming ever clearer. The so-called political ‘centre’ is collapsing, parliaments are more fragmented than ever, public opinion is swinging both left and right. This is an expression of the growing polarisation and radicalisation of society. All classes and layers of society are testing the political parties, old and new, in their search for solutions to the different symptoms of the crisis. Yet they are finding no answers that can truly change anything. The severe shocks of the last few years from the pandemic, the economic collapse, the climate crisis, the war in Ukraine, rising inflation and further coming shocks, have shaken the consciousness of the masses. In Germany, therefore, mass movements and protests are inherent in the objective situation. The vacuum, which can only be filled by a mass party committed to the class struggle, is constantly growing.

The contributions from comrades to the discussion of German perspectives sharply analysed the development of polarisation, the crisis of reformism and the mass organisations of the working class. In addition, we also discussed the crisis increasingly impacting the German imperialist ruling class and their state. In the imperialist power struggle, they increasingly find themselves caught between different fronts. Balancing between the various powers (the USA, China, the EU, Russia) is growing difficult, however.

As Marxists, we must observe and analyse how the crisis expresses itself in Germany. These perspectives open the way for us to connect with the radicalised layers of society and win them to the IMT. Ultimately, only the forces of Marxism, organised in a strong revolutionary party, can provide the working class with the tools needed to overthrow capitalism.

The international report gave us an overview of the development of the organisation at the international level. Worldwide, despite the pandemic, membership figures have risen considerably. In spite of this, we are still small in comparison to where we need to be. This, however, in no way inhibits comrades’ motivation; indeed it motivates us further. The reports and perspectives from sections in other countries created a feeling of unity and the certainty that we can meet the tasks we have set ourselves. In particular, the comrades who joined the organisation during the pandemic were able to step out of the familiar environment of their branches and see that they are a part of something bigger. 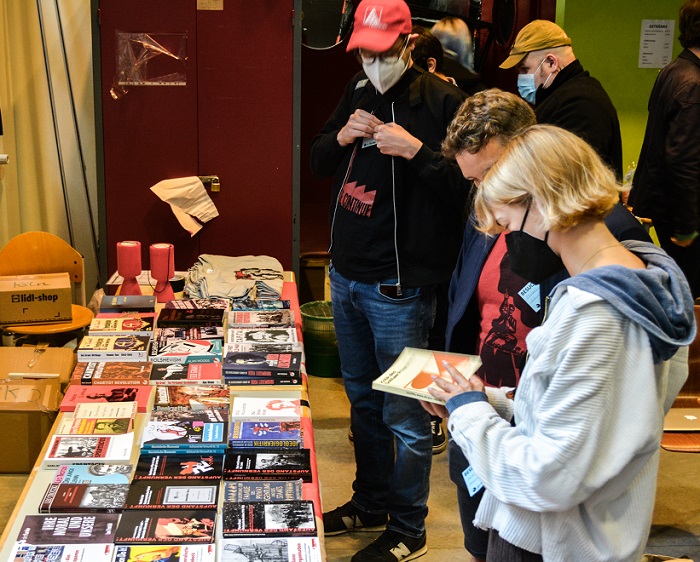 Also on the agenda was a motivating financial appeal for the International. At the congress alone, a formidable €11,000 was raised! / Image: Der Funke

The final point on the agenda was a motivating financial appeal for the International. The IMT has set its sights on buying a new office building in London in the coming period. At the congress alone, a formidable €11,000 was raised for this target!

After an evening social and the enthusiastic singing of workers’ songs, the first day of the congress was closed with an upbeat mood.

Sunday opened with a talk on the coming tasks for the building of the organisation. The discussion included numerous, diverse contributions that gave insights into the work of all the branches. These contributions were especially encouraging and motivating, as they gave comrades a view from beyond their own branches and allowed them to learn from the experiences of others. Likewise, the growth of the forces of Marxism in Germany in the recent period gave comrades a sense of confidence and pride. In the last few years, Der Funke has overcome important hurdles and is purposefully working towards 500 members in the coming years. Achieving this will require enthusiasm and a willingness to sacrifice among all comrades. You too should get active in the IMT, and join with us in the struggle for a successful socialist revolution.