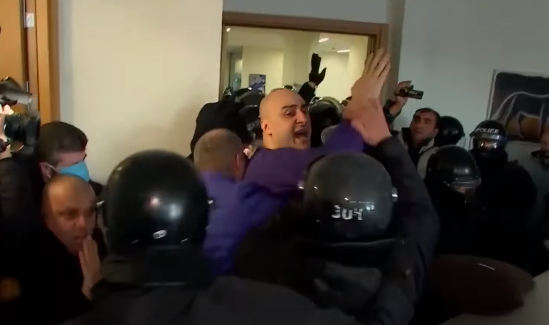 A crisis is escalating in Georgia following years of political and social rot. None of the mainstream parties have anything to offer the Georgian masses, who must fight to build a genuine alternative.

The recent conflict was sparked following parliamentary elections in October 2020, in which the ruling party narrowly held onto power against a coalition of opposition groups, with 55 and 52 percent of the votes in the first round respectively.

The main (and thoroughly reactionary) opposition party accused the bourgeois government of tampering with the election process, and called for supporters to boycott the second round. Subsequently, all the opposition parties issued a joint statement renouncing their seats until fresh elections are held.

Then, on 23 February, the offices of the main opposition party were dramatically raided by police, and its leader forcibly taken into custody on charges of failing to meet bail conditions for previously inciting a violent protest. This unleashed a furious response from opposition supporters, who in turn met with violent repression from the police.

What is the basis of this unfolding drama?

No voice for the workers

The rotten state of mainstream politics in Georgia, in which there is no genuine voice for working people, means the conflict we are seeing is led by two wings of the ruling class. 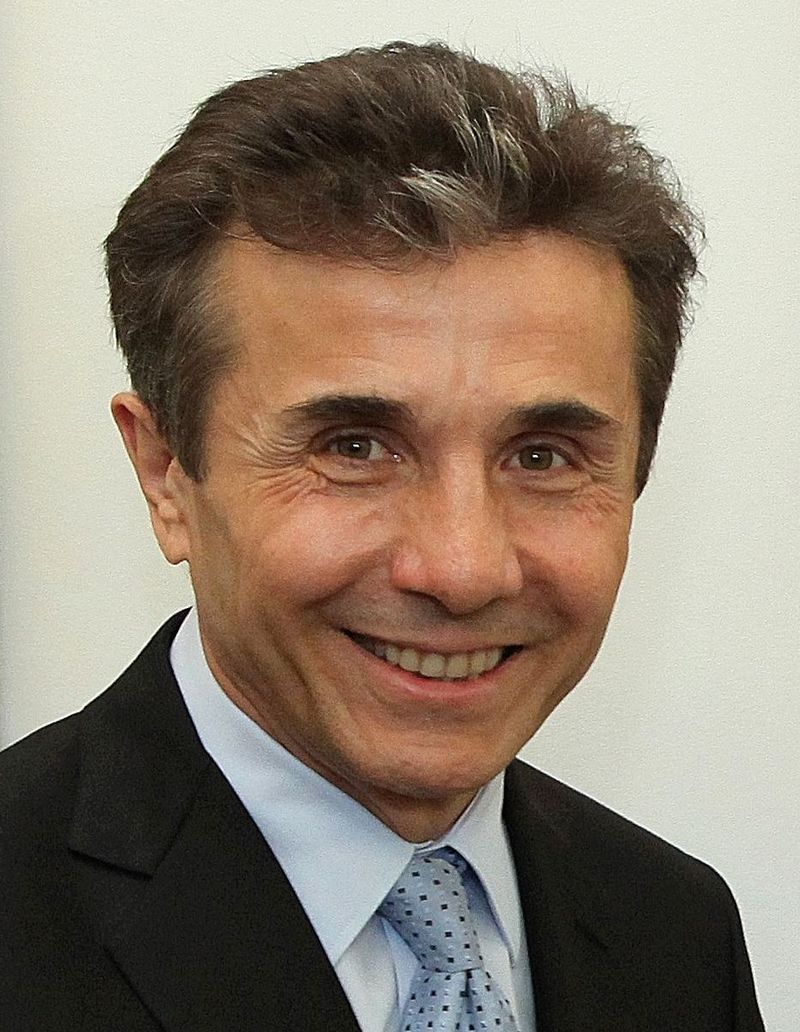 Georgia's ruling party was set up by oligarch Bidzina Ivanishvili, and the opposition is a reactionary nationalist, anti-Russian, pro-EU outfit / Image: Chancellery of the Senate of the Republic of Poland

While describing itself as ‘centre-left’, the ruling Georgian Dream party is a thoroughly bourgeois outfit, founded by billionaire oligarch and Georgia’s richest man Bidzina Ivanishvili, who was briefly prime minister between October 2012 and November 2013.

Despite taking a backseat role (having formally resigned from politics in January 2021), Ivanishvili maintains a tight grip on the party and ensures its leading bodies are stuffed with his cronies, who manipulate the Georgian political system and judiciary in order to benefit his various private interests.

The main opposition – the staunchly anti-Russian, strongly pro-EU, United National Movement (ENM) – is yet another bourgeois party, which came to power following the so-called Rose Revolution of 2003 on a right-wing, free-market, Georgian nationalist platform.

With the backing of Western imperialism, the ENM government presided over poverty, unemployment (with no benefits), and the privatisation of the health service, coupled with harsh state repression.

Georgian Dream came to power in the 2012 parliamentary elections by promising to raise state pensions, reform the welfare state, improve labour rights, and adopt a less hostile policy towards Russia. It also pledged to take a “zero tolerance” approach to corruption.

Of course, these pledges ultimately had little impact on the lives of ordinary Georgians. Despite a sustained period of economic growth, 20 percent of Georgians still live in a state of “absolute poverty”, and unemployment before the COVID-19 pandemic was estimated at around 30 percent.

In recent years, Georgian Dream has been trying to perform a balancing act between rival imperialist powers.

On the one hand, it sought political support and investment from the West. In 2016, during a four-day working visit to the US, then-Prime Minister Giorgi Kvirikashvili described the USA as “a strategic partner of Georgia and one of the main international guarantors of its sovereignty”. Georgian Dream is also making a bid for EU membership in 2024, and is seeking to join NATO.

On the other hand, the party has sought to normalise relations with Russia, which is in the immediate interests of capitalists on both sides of the border, particularly given the resumption of trade.

Georgian Dream has been cautious not to provoke Moscow, which dealt Georgia a very serious military defeat in 2008. For instance, despite voicing support for the Euromaidan government in Kiev in 2014, Georgia did not join Ukraine and Western countries in imposing sanctions on Moscow.

Ivanishvili in particular is seen as driving this friendlier relationship with Russia, and is regularly criticised by the opposition as manoeuvring behind the scenes to promote Russian interests. The opposition has exploited the situation by playing up nationalist sentiments among more reactionary layers of society, taking a more clearly anti-Russian stance than the ruling party.

It is also leaning on the wider masses’ anger with the political situation by attacking “corruption”, which is ironic, since this was one of the reasons it was discredited and removed from power. It has further benefited from disappointment with continued poverty and unemployment.

A prelude to the present crisis occurred in 2019, when protests broke out in front of the Georgian parliament in June following the invitation of Sergei Gavrilov, a Communist Party member of the Russian Duma, by Georgian Dream.

In an act considered highly provocative by the opposition, Gavrliov sat in the chair reserved for the Head of Parliament and spoke about the brotherhood between Georgia and Russia. That same week, Gavrliov had voted in favour of the independence of Abkhazia in the Caucasus, a territory officially considered by the Georgian government to be under Russian military occupation following the war in 2008, along with South Ossetia. 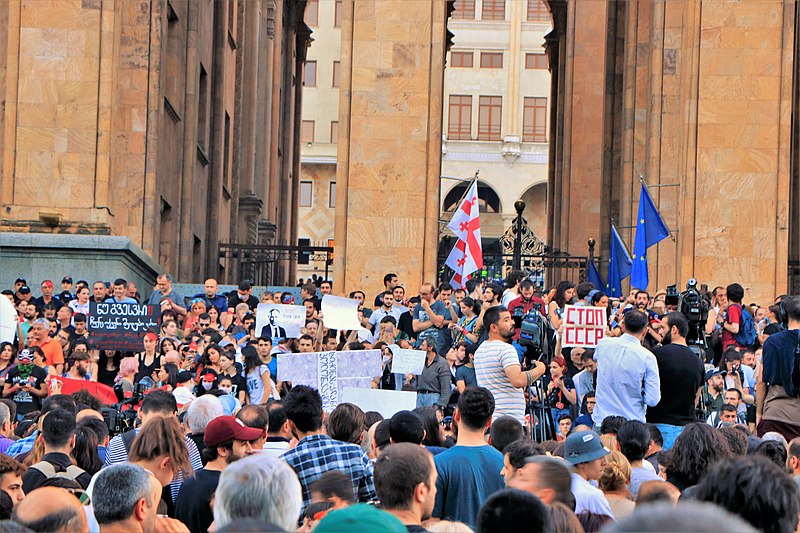 A prelude to the present crisis occurred in 2019. Protests broke out in front of the Georgian parliament in June following the invitation of a member of the Russian Duma. Protests continued for months leading to hundreds of arrests and injuries / Image: George Melashvili

This was leapt on by the ENM, who called for their supporters to protest for the government’s resignation, for electoral reform to weaken Georgian Dream’s grip on power, and for fresh elections.

This resulted in a series of major protests over the next several months, involving thousands of people, including prominent reactionary elements, waving Georgian, US, EU and NATO flags.

The first anniversary of so-called ‘Gavrilov’s Night’ in 2020 was marked by big protests in Tbilisi, led by various opposition groups. It came on the day before the first hearing in parliament of constitutional amendments to the country’s electoral system, which had been promised by Georgian Dream to quell the protests the previous year. These changes, the result of many rounds of negotiations over several months, were decried by the opposition as ornamental.

The ENM’s demagogic leader Nika Melia was indicted for “leading and participating in group violence” during the protest movement in 2019, after which time he wore a monitoring bracelet for 16 months. He subsequently refused to pay ₾30,000 ($9,100) bail. Following the October elections, he tore off the bracelet in front of parliament at a rally of supporters in an act of ‘defiance’, after which his bail was raised to ₾40,000 ($12,000).

The question of what to do with the increasingly audacious Melia caused rifts to open up in the regime. The more cautious wing understood their precarious position, and feared further destabilising the situation by taking him in. Meanwhile, the faction closer to Ivanishvili wanted to take firmer action against Melia.

When the Prosecutor’s Office finally ordered Melia’s arrest on 17 Feb, he barricaded himself in the ENM’s offices, surrounded by supporters who vowed not to let the police inside. The Interior Ministry put out a statement warning people not to interfere with the detention and gave them “reasonable time” to retreat.

The decision to arrest Melia deepened the crisis in the government, leading to the resignation of Prime Minister Giorgi Gakharia on 18 Feb, to be replaced with Irakli Garibashvili: former prime minister and close ally of Ivanishvili, who announced that Melia would “not manage to hide from justice”.

Initially, the government dithered and called off the arrest. But finally, a dramatic raid was launched against the ENM offices on 23 Feb, with police using a firefighters’ crane vehicle to bypass thousands of Melia’s supporters outside the building in Tbilisi. In the subsequent fracas, dozens were arrested after the police fired foam bullets and teargas canisters against the crowd.

Georgia’s western ‘allies’ all issued nervous responses, with the US embassy in Georgia stating it was “deeply concerned by the government's decision to detain the head of a major opposition political party”. EU envoy to Georgia, Carl Hartzell, added:

“Force and aggression are not the solution to resolving Georgia's political differences. Today, Georgia has moved backward on its path toward becoming a stronger democracy in the Euro-Atlantic family of nations. The logic of escalation is getting the upper hand. The political crisis is deepening.”

But Georgian Dream took a hardline, unrepentant stance. In a TV statement, Irakli Kobakhidze, chairman of Georgian Dream party, stated: “Polarisation is a result of criminals being in politics, not of so-called politicians being in jail.”

This level of polarisation and crisis in Georgia is worrisome for the Western imperialists, who have long regarded the country as a valuable and reliable ally in a region where Moscow holds the main balance of power.

Moreover, if the government adopts a more aggressive stance against the opposition, and increases state repression, this could provoke a serious protest movement that would have an extreme destabilising effect. It could also lead the masses to independently raise more fundamental demands around wages, unemployment and living conditions.

To be crystal clear: the opposition is reactionary to the core and we offer it zero support. However, we see in Georgia that the crisis of capitalism is creating a huge level of discontent that is starting to bubble to the surface in one country after another.

The main bourgeois parties are rancid, and unfortunately, there is no left party in Georgia to take advantage of this mood by presenting an independent class programme. The Labour Party, for example, lined up with the reactionary ENM as part of its electoral coalition.

As a result, the frustrations of the masses can be channelled in reactionary directions: nationalism, anti-Russian chauvinism, and so-called European integration (e.g. opening up to Western imperialism).

Ultimately, whether the Georgian masses are subjugated by capital from Moscow or Brussels/Washington makes no fundamental difference. The fight for “democracy” and against “corruption” in the context of a crisis-ridden capitalist system is a sham.

Despite the crimes of Stalinism, the fall of the USSR and restoration of capitalism ushered in a period of collapse and decay across Eurasia from which it has never recovered.

The Georgian masses must break away from the exchange of power between this or that bourgeois imperialist lackey and develop a genuine workers’ party, through which they can fight for real reforms, and a decent existence.