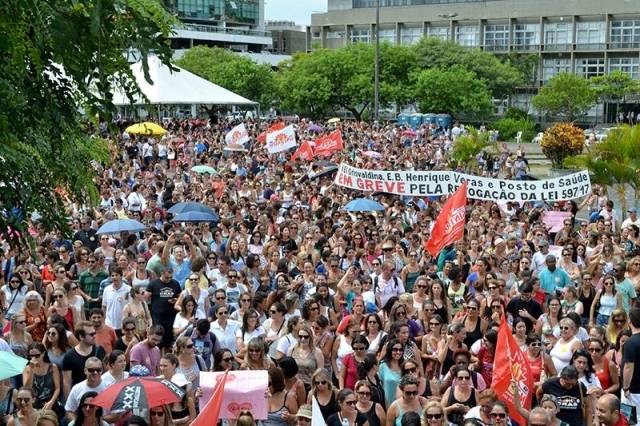 On Friday, Brazilian workers and unions led the first general strike in Brazil for over two decades, protesting austerity measures, and in particular harsh cuts in pensions, which are being implemented by the corrupt Temer government.

Millions of workers struck and took to the streets in the major cities across Brazil, with reports of strikes coming from every one of the country’s 26 states. The protests were largely peaceful, although in some cities, especially the larger ones, the ruling class was determined to stop the movement by any means necessary. This led to intense confrontations where the police violently attacked the crowds with batons, rubber bullets and teargas canisters. 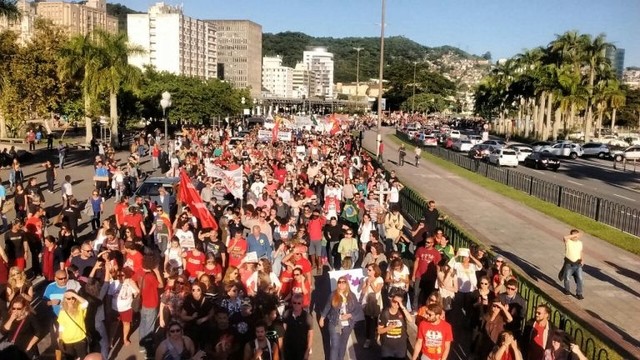 Reports coming from Sao Paulo described the city as “in lockdown” with all roads and railways paralysed, and blockades being set up, limiting access to the main airport. In the capital, Brasilia, there were reports of bus drivers refusing to end demonstrations despite threats from police officers, as well as roadblocks on major highways going into the city and to the airport. An angry crowd also attempted to march on President Michel Temer’s home. It was stopped by police who fired rubber bullets and stun grenades. The struggle intensified with protesters hurling rocks, lighting fires, and throwing concrete blocks into the centre of the avenue. A striking bank employee told the Telegraph: “We can't keep quiet anymore with a government that isn't legitimate, which wasn't elected to dismantle the rights of workers.” 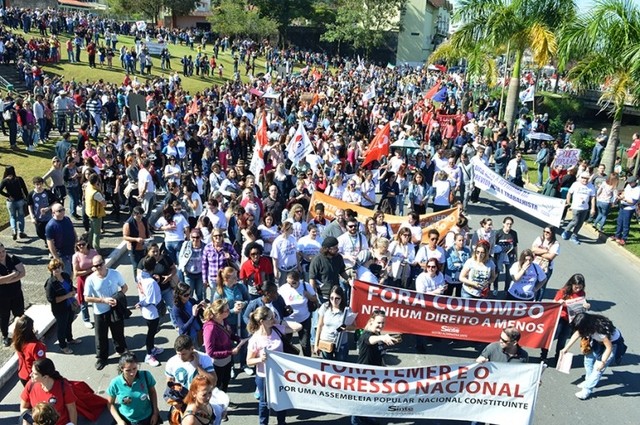 Joinville - Photo: Esquerda MarxistaThe Brazilian section of the International Marxist Tendency - Esquerda Marxista - was also present in many cities across Brazil during the demonstrations. In the city of Joinville, the largest in the Santa Catarina state, the organization led more than 7,000 protesters in an event arranged together with one of the local unions (Sinsej). As the day progressed, municipal workers, students, state and private education workers, electricians, bankers, among countless others, joined forces and marched, shouting slogans such as "Out with Temer and the National Congress!” and "If pushed, Temer will fall!”. Figures published by the weekly newspaper Brasil de Fato report a total turnout of 35 million workers, making the strike the biggest in Brazilian history.

Despite this, President Temer’s statement after the strike claimed that it consisted only of "small groups”, and promised that his “work toward the modernization of national legislation will continue”.

The Temer government and the Brazilian political elite represent the core interests of Brazilian capitalism. In a time of economic crisis, this means brutally attacking workers’ rights and living standards in order to defend the profits and privileges of this capitalist class. The result is that for the majority of the working class and the poor it is impossible to maintain a decent life.

On Thursday, the day before the strike, the Brazilian Supreme Court ruled that elite public servants could collect salaries above $140,000 a year, despite this being set as the maximum limit in the Brazilian constitution. Meanwhile, half of the Brazilian  population, more than 100 million people, earn just around the minimum wage of $4,000 a year. As the austerity measures of the Temer government are being carried through, and the economy in recession for the past two years, the unemployment rate has sky-rocketed to almost 15%. The result, according to a poll by Ibope on Friday, has been a collapse in the government's approval rating to just 10%, with 55% actively disapproving of its management of the country.

Temer and his government defend their measures, however. They claim these policies are necessary, and proudly boast about the achievement of having raised the Brazilian stock market by 20% percent in the past year, which means nothing to Brazilian workers.

With the attacks of the ruling class on the working class, we will not have to wait another two decades for another general strike. In a period of deep crisis like today, capitalism is forced to continuously attack the working class, its rights and its living standards; attacks which are getting more severe and harder to endure. This means we are witnessing the opening up of a period of intense class struggle and revolutionary upheavals.

The strikes across the country reflect the radicalised mood which has been brewing within the working class. With widespread corruption and with the prospect of better living standards more distant than ever before, workers are beginning to take matters into their own hands. Within a capitalist system in deep crisis, none of these things are achievable. To rid Brazil of corruption and oppression a whole new system is needed. A wide layer of the youth are already reaching such radical conclusions. Socialist youth movements such as Liberdade e Luta, promoted by Esquerda Marxista, have in the past year seen huge success in uniting students in the fight for an equal society no longer bound by the chains of capitalism. This is an anticipation of the developments which are to come in the wider layers of the working class in the next period.