Bangladesh
Share
Tweet
One of the issues confronting the G20, and one the official communiqué is likely to duck, is the threat of climate change making parts of the globe uninhabitable. Nowhere is the peril more present and manifest than Bangladesh, home to more than 130 million people. The G20 leaders may smile for the cameras as their conflab closes, but the working people of Bangladesh are at the sharp end of capitalism’s failure to deal with threat of climate change.

One of the issues confronting the G20, and one the official communiqué is likely to duck, is the threat of climate change making parts of the globe uninhabitable. Nowhere is the peril more present and manifest than Bangladesh, home to more than 130 million people. The G20 leaders may smile for the cameras as their conflab closes, but the working people of Bangladesh are at the sharp end of capitalism’s failure to deal with threat of climate change. 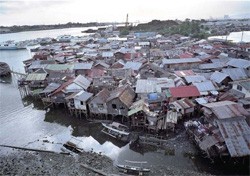 Tucked alongside the banks of Lake Carter, within the grounds of Lancaster University, floats an unusual piece of art. Kept on the surface via tyres strapped to the underside, a bamboo frame hosts a base of artificial grass alongside a picket fence and roses. Closer inspection reveals that this Floating English Garden also sports a watering can, privet hedge, and other assorted paraphernalia.

However, Christine Dawson’s work is not meant to be just another curiosity to pique the interest of the passing art lover. The piece is modelled on the green and red flag of Bangladesh and with jute making up a prominent part of the installation – jute being one of Bangladesh’s principle exports – it exists to convey one message: Bangladesh is sinking.

For decades now global warming has been the hot topic – no pun intended - for scientists and politicians the world over. But it is only relatively recently that the effects of catastrophic climate change have begun to be felt.

The disaster facing Bangladesh has its roots in the low lying and high silt composition of its soil. Due to proven effects of global warming, the rising sea level of the Bay of Bengal has began to permeate the landmass, causing fresh water rivers to experience a rise in salt content.

This has served to kill off much of the fish population, as well as affecting rice production; a staple diet for many. The water has also seeped into adjoining fields, making them all but useless for the purpose of growing crops.

Those dependent on such water sources for fishing or something to drink have found themselves with few options. Disease from consuming unclean - albeit salt free - water is on the increase, with a rising death toll to match.

Bangladesh has an abundance of over 230 major rivers which once made the area ideal for agriculture. As salt water overruns them however, the rivers are also being swelled by melt-water coming down from warming glaciers of the Himalayas.

Although up to 30-70% of the nation is generally affected by floods each year, the increased volume of water coupled with rising salt content has led to a curtailment of land suitable for habitation.

The rising sea level has also caused some areas to disappear altogether. The island of Bhola, the nations largest, has now lost over half of its mass to the ocean in the past decade.

Cyclones, which used to be relatively common, are on the increase in frequency and strength. In November 2007 Cyclone Sidr smashed through the nations south, taking 3,000 lives and devastating entire settlements. Since then, cyclone warnings have become reoccurring, which has hit the fishing industry hard, in the process further plunging people into poverty.

Bangladesh is counted as the most crowded nation on earth. With a population of over 130 million people, the nation suffers from wide scale poverty with a per capita income of just around 370 US dollars. Around 75% of the population live in undeveloped rural areas, whilst millions of workers in the urban centres languish in low paid jobs producing goods for export.

It is not currently known if the government has plans in place to counter the alarming effects climate change is having. Such a policy would have to be implemented at an international level, with the governments of the industrial hubs of the US, the EU, Japan and China accepting responsibility. The only solution would be on a global basis.

Unfortunately, capitalism has proven itself incapable of doing this. The complete failure of the world’s leading governments to make a significant dent in carbon emissions has become a nightmare for working people. As a system, capitalism does not have a tendency for making long term projections outside of a potential profit margin.

This staggering contradiction between the objective needs of the people – in this case not to drown or starve – and the drive of capital to accumulate profit is being amply demonstrated. Instead of attempting to implement a plan of production to utilise cleaner energy sources, we see the Bangladeshi government continuing to develop fashionable tourist enclaves in coastal regions that are themselves under threat.

In the long run, it is now thought that the Antarctica ice sheet could melt entirely if carbon dioxide levels reach 400 parts per million; something which could happen as early as 2050. This will raise sea levels by around 16 feet.

However, according to some sources, by 2050 Bangladesh could already be mostly underwater.