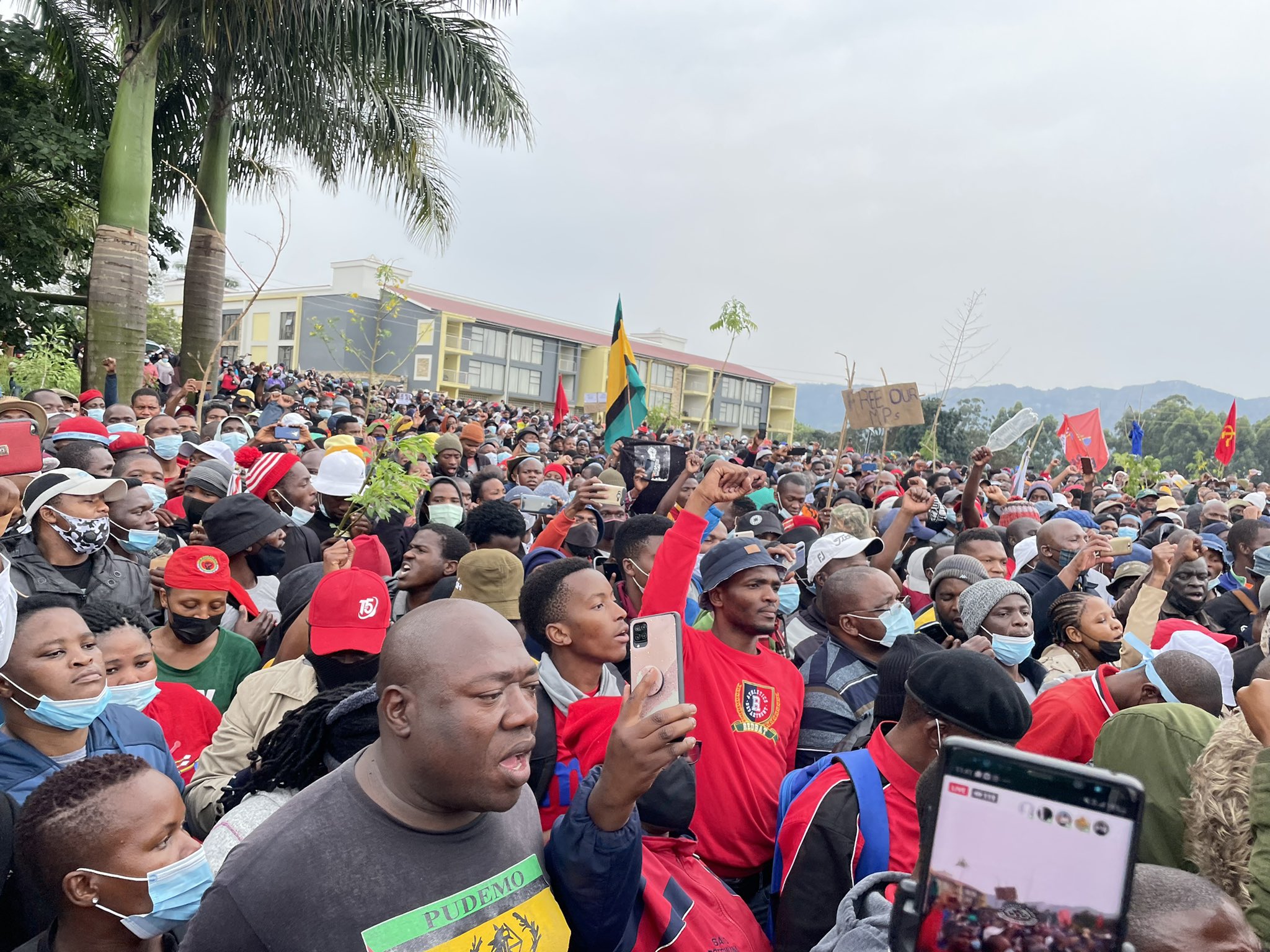 In an important development, a fresh wave of strikes is currently rolling across the small Southern African state of eSwatini. This has become some of the most significant movements by the working class in the country’s history. Despite severe repression, new layers are entering the struggle, including transport workers, nurses and government workers, as well as other sections such as students. This entrance of the working class onto the scene in such an organised way could provide the necessary momentum to topple the absolute monarchy of Mswati III.

The country has been rocked by a revolutionary crisis since June, when decades of anger and frustration against intolerable living conditions as well as the despotic rule of king Mswati III finally burst onto the streets. Now, the working class is entering the scene and has launched a general strike, which has crippled the country.

The campaign has gone through many phases, mobilising different sections of the society. Its momentum over the past few weeks has been building on the student front, with boycotts and protests under the leadership of the Swaziland National Union of Students (SNUS). Crucially, this action has now linked up with the movement of the working class. This momentum culminated in a country-wide protest with public transport workers, civil servants and many other sectors taking the streets on Friday.

The Trade Union Congress of Swaziland (TUCOSWA) held protests in multiple locations across Eswatini since Thursday. The latest reports indicate that the workers are continuing the strike. If this is confirmed, it indicates that they are ready to wage an all-out struggle against the regime. Despite heavy repression and censorship, demonstrations were held in Siteki, Manzini, Mbabane, Piggs Peak, Nhlangano, and Hluthi.

Last week Friday; thousands of protesters advocating for democracy gathered at Steki. This was before the army opened live rounds of ammunition shooting and injuring many protesters who are currently flooded in hospitals getting medical attention.#EswatiniProtests #Expo2020 pic.twitter.com/zG8osTQk9H

On 20 October, the unions also held demonstrations in the capital Mbabane and the commercial hub of Manzini. The police opened fire on the demonstrations, killing two and injuring at least 80 protestors, with the majority occurring in Mbabane. Again, the repressive measures failed to quell the protests.

In the east of the country, on the outskirts of Siteki town, a protest was held outside the police station demanding justice for Nhlanhla Kunene, who was killed by the police on 9 October for a curfew violation. The community was furious and decided to break the curfew themselves for several nights, despite heavy state repression. This is just one of many such heroic examples. The movement is now spreading like wildfire.

On 13 October, a student of Nzongomane High School near Nhlangano town was shot dead by the police at a small demonstration. Following the murder of this student, important sections of the society, including public transport workers and government workers such as teachers and nurses joined the protests. A wave of indignation soon swept the country culminating in a national strike on 15 October, which paralysed the country. The Communist Party of Swaziland (CPS) said the city has been “brought to a standstill” as public transport operators across the country joined the protests. This is a very important development. The working class is beginning to enter the arena of struggle and through their action, they can sense their strength.

On the same day, dozens suffered gunshot wounds when the police and army attacked unarmed protesters. Four deaths have been reported. Vehicles rushing the injured protesters to the government hospital in the capital city, Mbabane, were not allowed to enter the premises. The entrances were blocked for the security of King Mswati III, who was inaugurating a new outpatient department building in the hospital, less than a couple of kilometres away from where the protesters were being attacked by his security forces.

This was met by scenes of fury and revulsion at the callousness of the king. Running battles between police and protestors went long into the night. Then, in a new development, nurses at the hospital announced that they would refuse to treat any police or security official injured in the clashes. In the northwest, on the outskirts of Piggs Peak town, a police officer was beaten up after his weapon was snatched by the protesters.

Last Friday, the state shut down the internet for two hours as demonstrators headed to the capital. The shutdown came as images of the protests circulated on social and traditional media, including pictures of two people who said they had been injured by gunshots fired by security forces. The internet shutdown blocked social media completely for two hours, and left many services running very slowly afterwards.

On Saturday, the situation was calm. The government said it had shut the schools “indefinitely with immediate effect", as the country faces a wave of protests. Students have been protesting for a number of weeks, boycotting lessons and calling for free schooling, as well as an end to the regime under King Mswati III. According to reports, the army and police have been deployed in schools this week, and several students have been arrested.

Repression fails to stop the movement

Protests are still raging across the country despite the heavy response from the state. The killing, arbitrary arrest and detention of unarmed civilians have not made the protests go away. If anything, they seem to be emboldening resistance and creating conditions for the situation to intensify. The Emaswati masses have lost their fear of the regime. This is a very dangerous situation from the standpoint of the ruling class.

The murder of Thabani Nkomonye, a law student at the University of Swaziland, by the police in May triggered an already volatile situation into sustained protest action. Protests erupted after a decree by King Mswati III on 24 June banning citizens from sending petitions to parliamentarians to demand democratic reforms.

The ban fuelled protests in the country’s two largest cities of Manzini and Mbabane, with demonstrators calling for the king to step down and allow for a transition to a more democratic regime. Buildings connected to King Mswati III were reportedly torched by protesters. The anger of the protests has been fueled by the deteriorating economic situation and COVID-19 restrictions.

Since the start of protests, the government has launched a ruthless crackdown. But despite this, the state has failed to quell the masses. On the contrary, the repressive measures only serve to provide new fuel to the burning hatred the masses have for the regime. Dozens of people have been killed and many others tortured, detained or abducted. Authorities have also ordered internet and telecommunications shutdowns. As protests continue to intensify, authorities have deployed security forces to crush dissent, closed schools indefinitely and instructed mobile telephone network companies to shut down the internet and social media platforms.

For an all-out general strike to bring down the king!

The masses of eSwatini must, as a matter of urgency, form Self-Defence Units, and Worker and Peasants’ Militias and Village Defence Units to protect themselves from the violence of the state. The emaSwati masses must keep up the fight against the cruel and decadent regime, which has brutally exploited the working class and peasantry. We have seen street fights in Mbabane, Manzini, and other urbanised centres, where there is a greater presence of the working class, and it is clear the masses are ready to fight to the death if they must. The ruling class is on the backfoot. But now the masses must finish the job.

The first and most important call from the unions and CPS must be for an all-out and continuous general strike and popular insurrection in eSwatini, with the aim of overthrowing the monarchy. Action committees must be set up in all factories, neighbourhoods and schools and connected on local and national levels, in order to coordinate the struggle. Galvanised around the slogan for a democratic republic, such a strike will paralyse the country, cripple the ailing regime, and set the stage for the working class to take power. This must be organised quickly and decisively.

We must point out that the mere abolition of the monarchy in eSwatini will not end the suffering of the people. Any political democratic reforms that do not include the working class taking power and putting the wealth of Mswati III under democratic public ownership, will see power merely being transferred to a new elite of capitalists who will rush to fill the power vacuum. As long as capitalism is maintained, we will still see the continued exploitation of the Emaswatini people.

The people of eSwatini cannot rely on help from the liberal opposition. Opposition and civil rights groups have called on organisations such as the Southern African Development Community (SADC), African Union (AU), or the United Nations (UN) to intervene. Even if these organisations were to force Mswati to step down, such action would only serve to take power away from the working class and hand it over to the liberals. The honeymoon of a new “democratic” eSwatini would be short-lived, as the assets of the former king, including mines, agriculture and real estate, would be sold off to the private sector instead of taken under democratic public control.

It is critical for the working class of eSwatini to take its future into its own hands. Violence from the brutal crackdown must be defended against by organising community and workers’ defense committees. Workers across the economy must also organise into a mass general strike. This is the only way forward. From this, the working class can demand not just the king’s overthrow, but the placement of his extensive economic assets under democratic workers’ control for the benefit of the people.