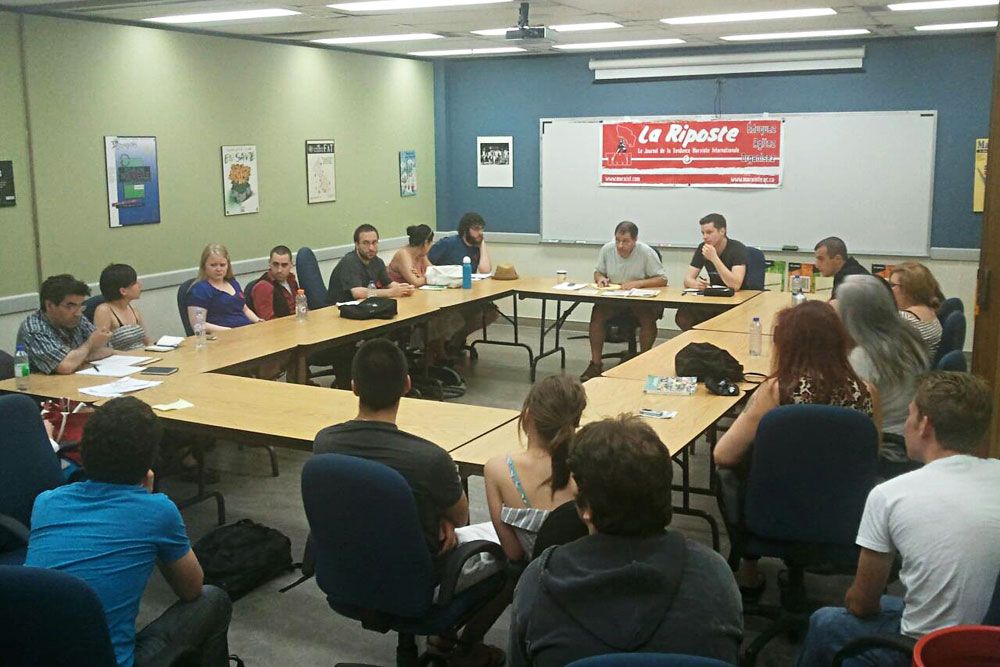 In the current political context of Quebec, Fred Weston, the managing editor of the popular international website, In Defence of Marxism, visited Montreal in order to discuss the economic crisis and the increased class polarization in Europe, and what lessons we can take from these experiences for the struggles in Quebec today.

Fred Weston gave a profound analysis of the situation in Europe, particularly in Greece, to a full room of approximately 30 people. The meeting, which was held at the central offices of the CSN (the Central National Union) in Montreal was attended by many youth and workers.

It was obvious, by observing the room and listening to the questions and discussion, that the event was a big success. Many different questions were posed regarding the history of different political tendencies in each country, in particular regarding the increase in the vote for the left parties in general. Many people purchased La Riposte and other booklets relating to many different political questions, as well as classic Marxist books.

Stressing that the processes that have emerged in the European economy is at the root of the political crisis that eventually led to popular movements such as los indignados in Spain, the growth of Mélanchon's popularity in France, etc., Fred also considered that these are currently being felt in Quebec, and that they will only continue to strengthen both in Quebec and the rest of Canada.

Similar to the revolt of the Greek students in 2006-7, Fred stipulated that the student movement in Quebec is a symptom of the grand malaise in society in general.

"Capitalists are forcing governments around the world to implement austerity policies," said Fred, "but there is a limit to stress that a human being can suffer. The working class in Greece is struggling because it wants a decent life."

He continued, “Each province in Canada has a substantial debt. The austerity that we are seeing right now is nothing compared to what we are going to see when the world wide crisis gets worse.”

Fred also put forward the socialist solution of nationalization under democratic workers' control of the main levers of the economy, which resonated well well with all present.