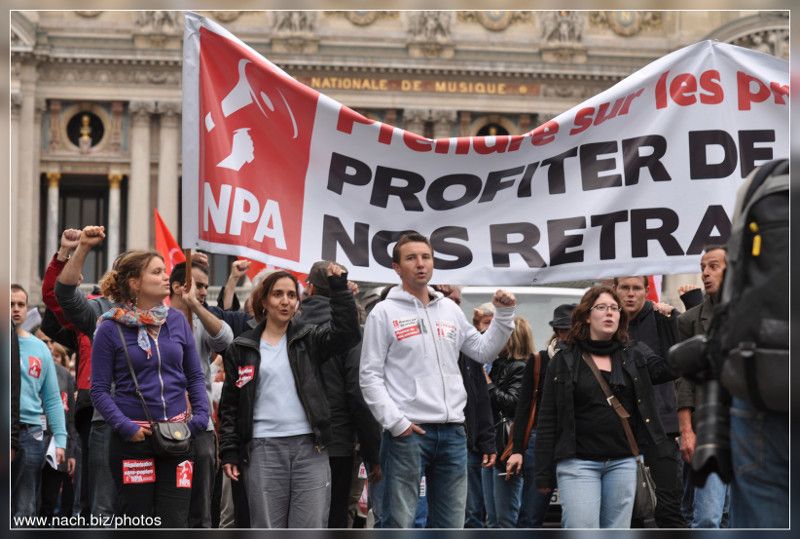 The New Anti-Capitalist Party (NPA) was set up in France, supposedly as an alternative to both the Communist and Socialist parties. The leaders of these two parties had shifted more and more towards market orientated policies. In reality the leadership of the NPA also suffer from the same illness, in that they believe that in order to be successful on the electoral front they must tone down the Communist and revolutionary content of this new party. That is not what many genuine revolutionary militants were expecting from the NPA.

The NPA [New Anti-Capitalist Party] counts in its ranks a certain number of revolutionary activists who seriously struggle against the capitalist class and want to finish with Capitalism. But these elements are increasingly isolated inside their own party. The NPA differs from the LCR [Revolutionary Communist League which later became the NPA together with other forces] by the fact that it is much more heterogeneous, politically speaking.

Long before its dissolution, the LCR characterised itself by a certain light-minded approach to questions of theory and programme. In spite of that, the great majority of its members saw the LCR as a revolutionary organisation, having as its objective the overthrow of the Capitalist system and its replacement with Socialism. However, the launch of the NPA, with so much media endorsement, has attracted a mass of petit-bourgeois elements, among whom a good number are mainly interested in elections and in positions that the organisation may get in the “institutions”. The NPA had everything to gain, they thought, and would go from success to success. They repeated endlessly that the PCF [French Communist Party] is “old-fashioned” and on its “last legs”, and thought that the NPA would replace it as the principle force “on the left of the Left”. The results of the regional elections demonstrated that this is not the case. The vote secured by the NPA was no better than what the LCR could have expected in similar circumstances.

This failure will have consequences inside the NPA. One occasionally hears that the diversity of the NPA gives it strength. This is manifestly untrue. At each serious test, the different tendencies will draw different conclusions, and sometimes radically opposed to each other. Now, those members for whom the electoral results of the NPA are the most important thing will draw the conclusion that the break with “radicalism” and the “Communist” profile of the LCR has not gone far enough. They will apply pressure to put “anti-capitalism” in the background, to the advantage of more moderate ideas – vaguely environmentalist, feminist, etc. – which they consider to be more advantageous on the electoral front. On the other hand, the activists for whom the NPA is above all an instrument of class struggle will try hard to push it in the opposite direction. The struggle between these tendencies has already begun, and it will be accentuated over the months and years to come. Eventually, it will lead to ruin.

The collapse of the USSR and other totalitarian regimes in Eastern Europe provided the opportunity for a vast ideological offensive on the part of the defenders of Capitalism. Capitalism and the blind forces of the market had finally triumphed over the planned economy and over “Socialism”. This offensive had a considerable impact on workers all over the world, and especially on the leadership of the parties of the Left, in France and elsewhere. The leadership of the Socialist Party renounced Socialism, even as a long-term goal, in order to rally openly behind the so-called “free market economy”. In the Communist Party, Robert Hue and the party leaders went as far as supporting privatisations, notably during the government of Lionel Jospin (1997-2002).

The LCR also was not immune to these pressures. Basically, the leadership of the LCR took more or less the same route, albeit more slowly. The idea that underpinned the NPA project was to break with the ‘Communist and revolutionary’ tradition in favour of a vaguely ‘anti-capitalist’ image. This was only the beginning of a long period, during which numerous leaders of the LCR saw its Communist, revolutionary, and ‘Trotskyist’ heritage as an obstacle to its development, and in particular to the improvement of its electoral performances. The public propaganda of the “League” did not speak of Socialism. Its programme limited itself to partial measures along the lines of that of the PCF.

The principal slogan of the NPA, which you will find everywhere on its flyers and posters, calls for “taxing profits”. As it happens, profits are already taxed, but shouldn’t we tax them more heavily? This measure would certainly go in the right direction. But given the way Capitalism works, certain consequences would logically flow from this. To avoid paying taxes, the capitalists would adopt more measures of shifting their operations elsewhere and would close plants, but the programme of the NPA does not include any proposals counteract such a reaction. The NPA may well be “anti-capitalist”, but what does this term mean if the programme that the organisation defends doesn’t propose any serious alternative to Capitalism?

The sectarian attitude of the LCR regarding the PCF and the Socialist Party was a constant source of irritation for the activists of our party. For example, in the 2002 presidential election, we should remember that the LCR leaders had called for abstention should the Socialist Party, in the second round, face Jacques Chirac. The PS and PCF were “the same thing” as the Right, they said. But when Chirac found himself up against Le Pen, the LCR called for a vote for Chirac. Such behaviour has a lot to do with the prejudices held, even today, among Communist Party activists against ‘Trotskyism’. But we must also recognise the fact that the existence of ultra-left organisations – Lutte Ouvrière [Worker’s Struggle], the LCR, and today the NPA – is also the price that one has to pay for the political shifts and inconsistencies at the top of our own party, whether in the “Stalinist” era or since then. Stalinism repelled the youth and workers, as did the infatuation of the leadership with the “free market” since the era of Robert Hue. No one is interested in Communist ministers who privatise, apart from the capitalists.

Capitalism has failed, and Marxism has lost none of its relevance. If revolutionary militants wish to fight against Capitalism in a consistent manner, they must take an interest in theory, in the ideas and principles of Marxism. Many Communist activists are convinced that the PCF must reconnect with these ideas. La Riposte subscribes to this movement and works hard to contribute to this effort in its paper, on its website and in its public activity in general. We are confident that the genuinely revolutionary elements within the NPA will find the ideas, the theoretical explanations and the perspectives that correspond to their aspirations.