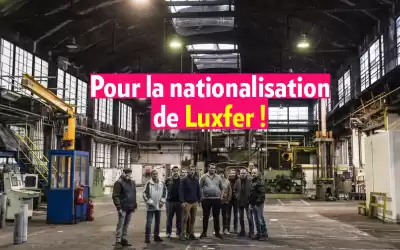 In November 2018, the British management of Luxfer Group announced the closure of its factory in Gerzat, in the department of Puy-de-Dôme. This despite the fact that the site was turning a profit and receiving many orders. The factory, which manufactured oxygen tanks, shut down in 2019, which led to an important mobilisation by the workers. The health crisis triggered by the coronavirus has given new meaning to their struggle.

Interview with Axel Peronczyk, CGT shop steward from the Luxfer factory in Gerzat.

Read the original in French here

Before its closure, the Gerzat Luxfer factory was in credit. What place did your products occupy in the international market? Which sectors were the main customers?

With the one in the UK, our factory was the last one left in the EU. Luxfer Group controls over half the world market for oxygen tanks. In total, this covers different sectors. Here in Gerzat, we essentially produced for the healthcare sector and for firefighters. Our production was sold over the whole European market but also in Russia, North Africa, South Africa, Australia and South Asia. Our factory was massively profitable, with a 12% profit margin. In 2018, the year when the closure was announced, out of 22 million turnover, we had brought in 1 million net profit.

The workers decided to occupy the Luxfer site starting January 2020. What were your demands during this occupation?

In June 2019, most of the workers were fired. Most of us came back regularly, to help with the mobilisation. But starting in January 2020, management sent bulldozers to destroy our tools: they chose to destroy everything, so that they wouldn’t have to respect the terms of the revitalisation agreement, which we had negotiated and which obligated them to look for a buyer for the factory. That’s why we occupied the site.

Our first demand was to save the factory. We found two buyers, whom management refused. We put together a plan to turn it into a cooperative: also refused. We also asked the state to look for a buyer, which was never done despite our repeated pleas.

Our demands also concerned the health and environmental risks entailed by the destruction of the factory: there are dangerous products in the machines and there was a risk that they would spill into the groundwater, as well as fire hazards and potential asbestos contamination of the nearby riverside. The DREAL (Regional Directorate for the Environment, Planning and Housing) intervened and declared that the Luxfer management was putting the area at risk.

Nowadays, you can fire workers even if the company is making profits. The bosses just categorise it as “layoffs on economic grounds” and as long as this is not investigated by the judiciary, unfair dismissal practices continue. The only ones exempt from this are “protected” employees – trade union representatives, members of CHSCT (Committees for hygiene, security and working conditions; scrapped by Macron’s labour law reform ordonnances in both the private and public sectors) – which rightly creates a legal precedent for other workers. 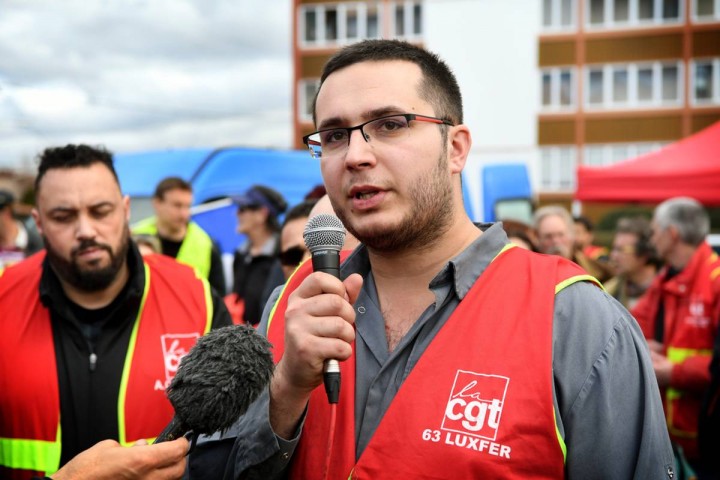 In the case of our factory, where all the workers were fired, there was an inquiry by the General Directorate for Labour, which recognised that there was no case for layoffs on economic grounds, and our case went all the way to the Ministry of Labour. We asked the Ministry to take the side of the people, to recognise our case, but they automatically approved the economic argument for the layoffs, without taking into account the elements of the case brought by the workers, when we had built a 34-page case file, with 55 exhibits of evidence. That was a month ago.

Finally, we were demanding state aid for the fired workers: even though 15 percent of us have found a job, precarity remains a serious risk. And in fact, those who were forced into temporary work have now lost their jobs due to the coronavirus crisis, and the majority of the workers are unemployed.

The healthcare crisis and the quarantine measures have had an impact on your mobilisation. How are you organising now?

We have handed over the responsibility for the site to the prefecture, even though our own barricades remain. The state has to decide whether to save the site or not. Our factory is particularly important in this period, as it produces oxygen tanks.

We cannot trust management: during the whole period of the redundancy plan, which lasted 16 months, all the workers were pressured and harassed. The negotiations towards the end featured the presence of the police and intelligence services. The boss constantly insulted us, just to provoke us. During their termination meetings, the workers were harassed by their managers. In front of the DIRECCTE (Regional Directorate for Enterprises, Competition Policy, Consumer Affairs, Labour and Employment), they justified not respecting the redundancy plan by stating that they wanted “to give the workers a life lesson.”

They brought in “transition managers” to act like the real armed wing of the bosses, like a private militia! Some men came from England to provoke us, to push us to the limit. They were following us in the street.

Our factory became the site of one of the first redundancy plans after the Macron ordonnances of 2017 – it gives us an idea of the new rules concerning layoffs. Now the bosses are ultra-prepared and they have unlimited means at their disposal. The law has created and condoned this situation, and the state is practically not intervening: it doesn’t want to get involved, because actually it is precisely the government that is responsible.

Our unity has been our strength in everything we have been through. Our community has been strengthened through this mobilisation. Together, we presented a counter-proposition to the redundancy plan, which proved that the factory was profitable. And when we put together the cooperative project for the Luxfer factory, we had a crash-course in several matters and we rapidly educated ourselves. We had an 8-year plan that we came up with in three or four months. Before the closure, we had already been without management for a year and during that year, the turnover had increased. 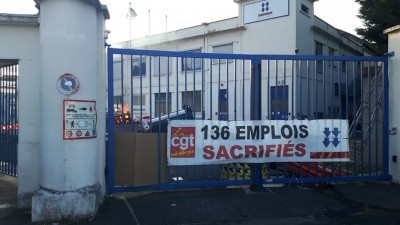 The left should demand the total and definitive nationalisation of the factory / Image: fair use

Luxfer Group organised an intentional delay in procurement, a dangerous strategy for a business that practically holds the monopoly on this market. When we wanted to alert the state about this delay in procurement, we asked them about the levels of stock of oxygen tanks, what role this delay would play in relation to the stock, and whether there would be an impact internationally: they were incapable of answering us. Now the only factory in Europe has stopped production, while China has announced that they’re struggling to supply oxygen tanks. This is also the case in Italy, which is supplied by Luxfer: we recognised our products in the images coming out of Italy.

How did the workers in struggle react to the support coming from different political representatives these last few days?

Their support is welcome, as it gives us media attention, it gives visibility to our struggle. But we are not going to be taken for fools: amongst those who are claiming to support us, there are some who talk about us without ever coming to see us, and then there are those who actually take the time to meet with us, to contact us.

What should the leaders of the left demand?

They should demand the total and definitive nationalisation of the factory. Our factory was privatised in 1995. At the time, it was part of the Pechiney Group. In all the former Pechiney factories, we see techniques of manipulating aluminium that are worse than the ones employed twenty years ago! It is a consequence of privatisation. Privatisation has nothing to do with innovation.

In fact, Luxfer Group is closing our factory for one simple reason: we were producing top of the range material, but they also have the monopoly on lower-end steel. By creating delays in procurement, they are trying to push their customers towards the lower-end market, in order to then be able to increase the prices, and consequently their profits, in one fell swoop. This is technically illegal in the European Union: the fundamental right to work is not respected, no more than the right to “free and undistorted competition”. Even the laws of capitalism are not respected by the capitalists themselves, in this system that is on its last legs.

The radical left is demanding the nationalisation of the site, but a part of the right is, too. Do you think they have the same conception of nationalisation?

Not at all! When LREM (La République en Marche, Macron’s ruling party) or the right talk about nationalisation, it has nothing to do with what we want. They think we should nationalise the losses, then give the business back to the private sector when the situation has improved. For us, the losses should be nationalised but also the profits. What we are demanding is that there not be a return to the private sector when the coronavirus crisis has been resolved.

Nationalisation should not be used to give even more gifts to shareholders. For example, there was a plan to make massive investments during the nationalisation of Pechiney, but that wasn’t the case when the group was privatised. So, in the final analysis, the private sector was given public money for free.

What are your perspectives for the struggle you’re carrying out?

We are hoping for nationalisation under state control, with the aim of stimulating the development of the whole area surrounding the factory and restarting economic activity. In our day and age, there are two great crises: the health crisis of the coronavirus, and also the big fires, in Australia, in the Amazon… We are capable of responding to both of these crises. Macron has said that there are some goods that should remain outside the private sector: this is our case, so we are waiting for action now. We are continuing to put pressure on the state.

The coronavirus is showing the limits of globalised capitalism: Famar, the business that produces chloroquine, could be nationalised – this is what the CGT is demanding. We are noticing that all over the country, the suppliers of medical supplies are struggling.

In the last few weeks, the demands to nationalise the businesses that are key to containing the spread of the virus, and to halt all non-essential production, have been put forward by some sections of the labour movement in France, but also in the rest of Europe. What is your view on this international class struggle?

I hope that mentalities will change. We are victims of one of the first redundancy plans after the Macron ordonnances, it’s a period of mass destruction of assets by the French state and by the European Union, but there is an awakening of consciousness: we have to regain the upper hand, it’s not logical that the financiers run everything. The whole system is the problem.

Do you want to add anything, by way of a conclusion?

We have published online a petition to demand the definitive nationalisation of the Gerzat factory: we invite you to sign and share it!

The petition: Definitive nationalisation of the Gerzat Luxfer factory