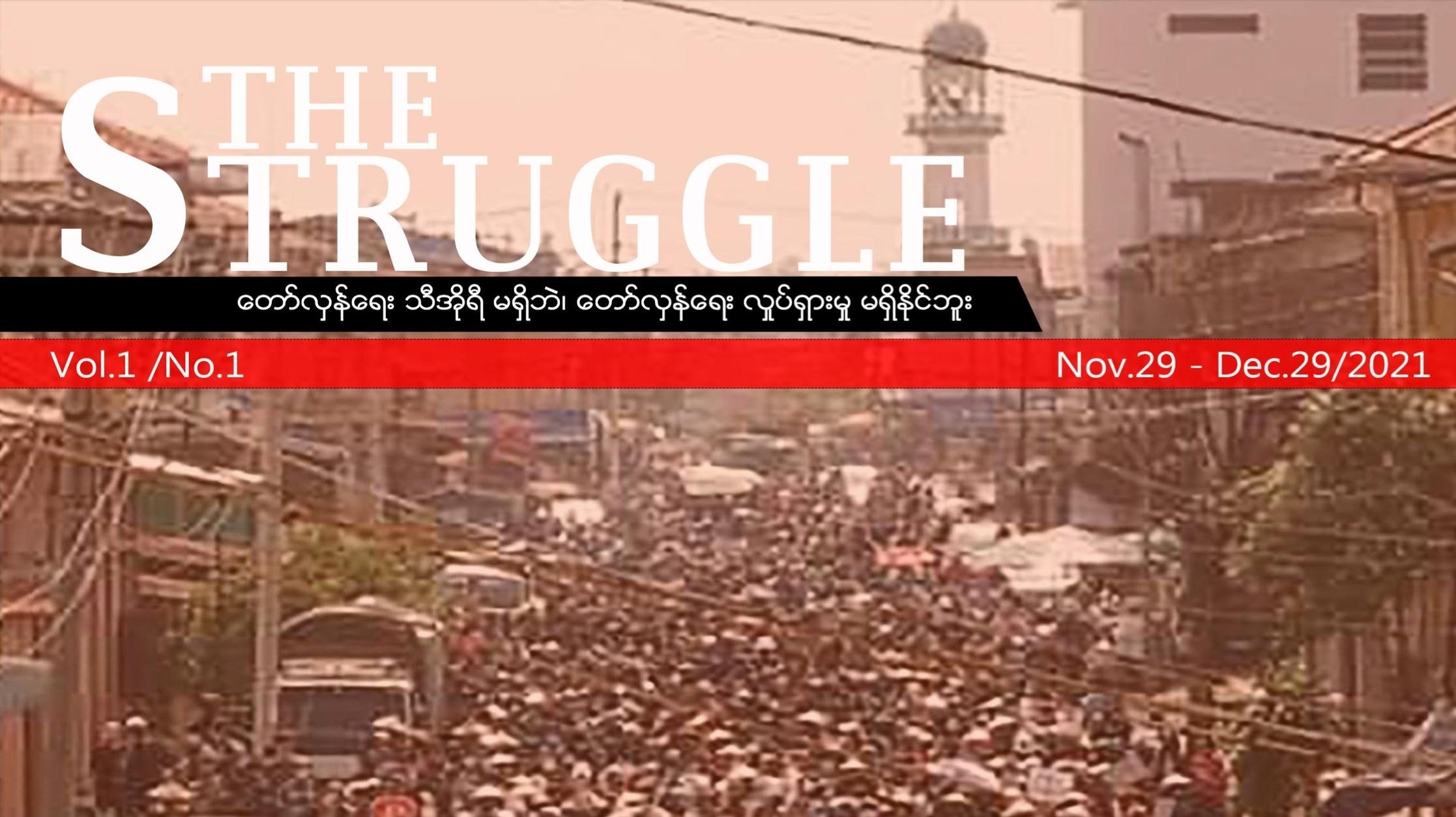 The following is the founding editorial of The Struggle, a Myanmar-based, Marxist militant publication in solidarity with the International Marxist Tendency. In the brutally difficult conditions in the country, a team of Marxist revolutionaries still managed to produce a PDF magazine, which they are distributing through their Facebook page “Revolutionary Marxism” (which as of now has over 7,100 likes). Please contact that page if you would like a copy of The Struggle. The English translation below is slightly edited from the Burmese original, clarifying a few points for the benefit of international readers.

We are proud to launch The Struggle, a digital monthly magazine. Many on the left in Myanmar might ask: is it still necessary to publish a specialist political magazine in this era? After all, one can easily access a myriad of news articles on the internet. But that alone in our view is unequal to the task of understanding the situation in Myanmar today, and far from sufficient for building for the socialist revolution, which is the only way forward for Burmese workers and youth.

There is no shortage of up-to-the-minute news coverage by the ‘mainstream’ media, and various such publications exist online. But the main difference between The Struggle and these news outlets is that our magazine lays emphasis on the importance of Marxist theory. The Struggle is not merely a repository for justifiable outrage against the current injustices in society – it also provides ideas that offer a way out of the present crisis.

As Lenin famously said in What Is to Be Done?, “without revolutionary theory, there can be no revolutionary movement”. This is not merely a slogan. Despite the fact many leftists reiterate these words like parrots, only a few genuinely try to understand what Lenin meant. The most important element is the word ‘revolutionary’.

There are a thousand-and-one weird and wonderful theories out there that claim to be radical or revolutionary, from the anarchist ‘theories’ of Proudhon and Bakunin, to the postmodernist ideas of Michael Foucault, to the feminist notions of bell hooks. But what Lenin specifically underlined is the need for a revolutionary theory that can serve as a guide to action for a complete transformation of society. Anything less is insufficient.

And Lenin continues after his celebrated phrase: “this idea cannot be insisted upon too strongly at a time when the fashionable preaching of opportunism goes hand in hand with an infatuation for the narrowest forms of practical activity.”

In Myanmar today, we are seeing precisely this kind of “fashionable preaching of opportunism, which goes hand in hand with an infatuation for the narrowest forms of practical activity”. The frustrated petty bourgeoisie, including the intellectuals, are infatuated with narrow practical activity. As a result, they regard the activities of urban guerrilla struggle [against the military junta] as all that is necessary for prosecuting a successful revolutionary movement. They failed to recognise that the class struggle has receded in Myanmar at the present stage.

In exactly such a period in Russian history, Lenin hammered home the importance of revolutionaries redoubling their study and defence of Marxist theory. Lenin also explained that there were three particular circumstances that enhanced the importance of theory. [Note: At the time he was writing What Is to Be Done? (1902), the forces of Russian Marxism were still small, weak, and limited by the amateurism of small-circle discussion groups] These circumstances included:

“[F]irst… the fact that the Russian Social Democratic Labor Party is only in process of formation, its features are only just becoming defined, and it has as yet far from settled accounts with the other trends of revolutionary thought that threaten to divert the movement from the correct path. Secondly, the Social-Democratic movement is in its very essence an international movement. This means, not only that we must combat national chauvinism, but that an incipient movement in a young country can be successful only if it makes use of the experiences of other countries. In order to make use of these experiences, it is not enough merely to be acquainted with them, or simply to copy out the latest resolutions. What is required is the ability to treat these experiences critically and to test them independently. He who realizes how enormously the modern working-class movement has grown and branched out will understand what a reserve of theoretical forces and political (as well as revolutionary) experience is required to carry out this task. Thirdly... at this point, we wish to state only that the role of vanguard fighter can be fulfilled only by a party that is guided by the most advanced theory.”

What is “the most advanced” theory, according to Lenin? As we ask this question, we should bear in mind that many theories, movements and ideas existed at the time that purported to be radical or revolutionary [Note: for example, Narodism, which based itself on the peasantry and advocated individual terrorist methods]. The most advanced theory, of which Lenin spoke, was Marxism, also known as ‘scientific socialism’.

Today, there are many schools of thought and traditions that claim to be Marxist, from Stalinism and Maoism, to the Frankfurt School and so-called Analytical Marxism founded around G.A. Cohen. However, we will openly say that none of these are real Marxism. The genuine Marxist, scientific socialist ideas reside in the works of Marx, Engels, Lenin and Trotsky.

That is why The Struggle will not accept any form of distorted caricatures of Marxism. As Lenin wrote in the Editorial declaration of Iskra [the organ of the Russian Social Democratic Labour Party], “before we can unite, and in order that we may unite, we must first of all draw firm and definite lines of demarcation. Otherwise, our unity will be purely fictitious, it will conceal the prevailing confusion and hinder its radical elimination”.

Following on from Lenin’s position, we won’t make our publication a platform for so-called ‘radical’ or ‘progressive’ ideas like feminism, Maoism, anarchism etc. We base ourselves firmly on the genuine traditions of Marxism.

In Burma, which has a strong past tradition of Stalinism-Maoism, we must wage a theoretical struggle to lay a solid foundation for the revolutionary theories of Marx, Engels, Lenin and Trotsky. Quoting a lengthy passage from the preface of Engels’ The Peasant War in Germany, Lenin laid stress on the significance of theoretical struggle: “Engels recognises, not two forms of the great struggle of Social Democracy (political and economic) as is the fashion among us, but three, placing the theoretical struggle on a par with the first two”. The Struggle magazine will be at the forefront of theoretical warfare.

This is the only way to lay a solid theoretical foundation for a future revolutionary party. In the final analysis, it is Marxist theory, rather than bombs and rocket launchers, that can build the revolutionary organisation we need to liberate ourselves from the bloody misery of capitalism.