Share
Tweet
The founding congress of the PSUV Youth is set to take place on September 13-15th in Rio Chíco, in the state of Miranda. This is of the highest importance. As we shall see, the youth have played a very important role throughout the Venezuelan revolution.

The Venezuelan revolution today finds itself at its most critical stage ever. After a narrow but alarming defeat in the December 2007 referendum, the revolutionary movement faces a new, important test in the November elections for mayors and governors. Preparations are in full swing, and the counter-revolution is trying to mobilize maximum forces to win as many positions as possible, in order to use them in their continued campaign to undermine support for Chávez and the revolution. 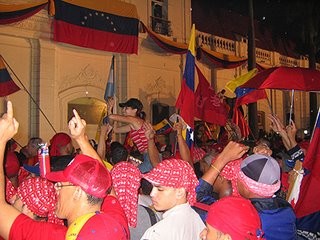 As part of this campaign, the sabotage of the capitalists continues, with scarcity of many basic food products. Speculation is an additional factor that has boosted inflation to extreme levels, making it very difficult for hundreds of thousands of working class and urban poor families to make ends meet at the end of each month. Crime rate has also increased - something the opposition conveniently uses to discredit the government.

If the revolution is to sweep away the counter-revolution, it must resolve these problems. We must remember that in December 2007, the referendum was not lost because of a big increase in votes for the opposition. It was lost because approximately 3 million people who had previously voted for Chávez abstained. The reformists attempt to explain this abstention as stemming from the allegedly  "low" level of consciousness of the masses. They promote the idea that this was a proof that the Venezuelan people are "not ready" for socialism.

However, for the Marxists, the explanation is very different. From our point of view, the analysis of the December defeat is still the key to understanding the present situation and the tasks that lie ahead. In our opinion, the abstention of three million chavistas was not at all due to the "low" level of the masses. In fact, what is astonishing is the degree of loyalty displayed by the Venezuelan working class and peasants to Chávez and the revolution. Time and again they have moved to defend the revolution against its enemies - not only in electoral battles - but on the streets, in the factories and the military barracks.

The reason the December referendum was lost was is because after 10 years of almost uninterrupted mobilizations, the masses see that their main problems remain unsolved. The power of the oligarchy is still in place, and even though the government has tried to put a check to this with partial measures and nationalizations such as SIDOR, Los Andes, the cement industry and recently Banco de Venezuela, this is not enough to stop the sabotage of the capitalists and begin a serious plan of production that can solve the pressing problems of the masses. To do this would require the complete expropriation of the bourgeoisie and a Socialist plan of production, distribution and exchange, democratically worked out by the workers and peasants.

The PSUV, which had its founding congress in February-March, enjoys widespread support. In June, some 2.5 million party members participated in the internal elections to determine the party's candidates for mayors and governors. Another two million are closely following the development of the party from the sidelines.

The most recent development is the call on behalf of the national party leadership to set up the PSUV Youth organization. This is of the highest importance. As we shall see, the youth have played a very important role throughout the Venezuelan revolution. The formation of the PSUV Youth is something that the Marxists of the CMR (Corriente Marxista Revolucionaria) have been advocating for the last year. It was the central slogan of the two Marxist youth encounters held in Caracas in July 2007 and in Ciudad Bolívar in November 2007, which brought together many young people from all over Venezuela.

The youth in the Bolivarian revolution

In the bourgeois media on a world scale, the Venezuelan youth (especially the students) are often portrayed as ardent supporters of the opposition. This is a blatant lie which is intended as a means of shoring up public opinion against the Chávez government. The reality is somewhat different.

The beginning of the Bolivarian revolution was an invaluable source of inspiration to tens of thousands of Venezuelan youth. In the poor urban neighborhoods, many young people began to form Bolivarian circles, groups and societies. Even in the old universities, which have traditionally been dominated overwhelmingly by the children of the bourgeoisie and petit-bourgeoisie, the revolution found a resounding echo.

At every decisive juncture, young people have energetically defended the revolution. For example, this was the case a year ago, when small gangs of fascist youth, supporters of the opposition, tried to set up burning barricades and blockade the streets of Caracas, in response to the non-renewal of RCTV's license. At that time - and again during the December referendum - the balance of forces was clearly very favourable to the revolution. While the opposition students could only mobilize a couple of thousand, the Bolivarian youth organizations mobilized more than one hundred thousand.

In the heat of the revolution, different youth organizations were born, most notably the Frente Francisco Miranda (FFM), which was started in 2003. Chávez gave it important support, both morally and financially. The FFM was launched with revolutionary slogans and called for young people in the poor neighbourhoods to get organized and solve local problems at the community level. It also began to organize brigades of Venezuelan youth to go to Cuba, where they received political and ideological courses, etc. As a result, the organization grew rapidly. In the space of less than one year, it had grown to more than 40,000 members, and had hundreds of organizers in  communities throughout Venezuela.

But there was another side to this as well. The organization was born with a highly bureaucratic, top-down structure, and the leadership did not allow criticism within the ranks. Ideologically, the FFM leadership tended towards a Stalinist position, only advocating Socialism after Chávez had embraced it, and focusing on the idealist conception of creating "a new Socialist human being", instead of pointing out the main political tasks that the Bolivarian revolution faces. As a result, this led slowly but surely to the widespread demoralisation of the membership, with thousands abandoning the FFM. From more than 40,000 it dropped to around 8,000 at the present moment.

This experience provides a clear warning. A genuine revolutionary youth organisation must have a fully democratic structure or it will become stale and the youth will abandon it. Also, if the PSUV Youth do not adopt the ideas of Marxism, it will inevitably fall under the influence of other ideas (reformism and/or Stalinism). As happened to the FFM, this would ruin the organization and all the revolutionary potential of the youth will vanish.

There are historical experience as well, that allow us to fully appreciate the significance of the PSUV Youth. In the 1930s, Trotsky carefully analyzed the situation in the workers' movement. At that time there was a ferment in the working class that began to express itself in the Socialist Youth in various countries. In France, where there was an important pre-revolutionary movement of the working class, Trotsky advocated his supporters to enter the Socialist Youth and win over its left wing to Marxism. This tactic was unfortunately only carried out too late and in a half-way manner.

In Spain, where a revolution had begun in 1931 with the proclamation of the Second Republic, the Socialist Youth become extremely radicalized between 1933 and 1935. The possibilities for a revolutionary Marxist tendency within the Spanish Socialist Youth were huge. Trotsky understood this and advocated the entry of his followers. He even predicted, in the summer of 1934, that if the Trotskyists did not win over the bulk of the Socialist Youth in France (and Spain), they would be won by the Stalinists.

This was exactly what happened in Spain, where the Trotskyists under the leadership of Andreu Nin rejected the call by the Socialist Youth leadership to join their ranks in order to "Bolshevise" the Socialist movement. The Stalinists were more clever and understood that the mass base of the Socialist Youth would be decisive for the outcome of the Spanish Revolution. In 1935 they fused their Youth Organisation with the Socialist Youth, and in the coming years, used this mass base to effectively impose their moderate slogans on the movement ("First win the war against Franco, and only afterwards win the Revolution"). As we know, the result was a crushing defeat of the Spanish working class that led to 40 years of Franco dictatorship.

This lesson should be fully absorbed by the Marxists today. The CMR will be actively participating in the building of the Youth. We will fight shoulder to shoulder with the left wing delegates and put forward a Marxist position in the discussions that will take place in the congress (so far, we know that the food scarcity question and the question of military defence against imperialism are on the agenda).

Throughout the country, there are young people in dozens of local collectives as well as unorganized activists who will see the PSUV Youth as a possible revolutionary tool that can throw out the bureaucracy and finish the power of the oligarchy. These layers have seen first hand that reformism does not work, and they are searching for other ideas. This is the reason why the recent speaking tour of the British Marxist theoretician Alan Woods - organized by the CMR - was such an unprecedented success, precisely because he explained revolutionary ideas that connected with the aspirations of the rank and file of the movement.

It is the duty of any genuine revolutionary to work with these wide layers of Bolivarian youth and win them over to the programme and methods of revolutionary Marxism.