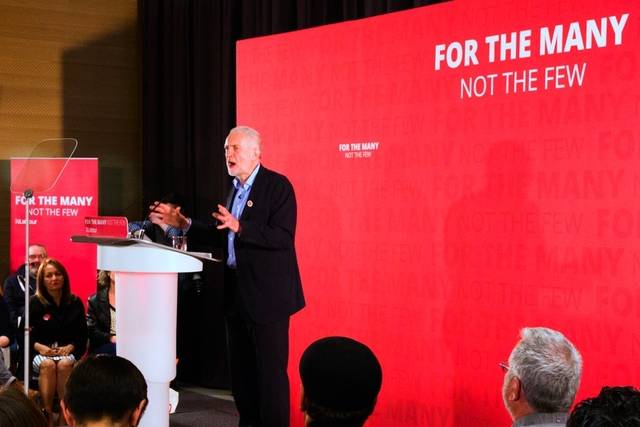 In a confident anti-establishment speech in Whitechapel on April 29, Corbyn launched the Labour Party’s slogan for the upcoming general election. In spite of (or perhaps because of) another week of more-or-less open sabotage by current and former Labour Party grandees, the Labour Party election campaign has generated a lot of enthusiasm. An estimated 200,000 activists participated in some form or another in the Labour Party campaign this last weekend.

With promises to reform the trade union laws, build more housing, tax the rich, and provide more funding for public services, Corbyn’s more militant tone over the last couple of weeks has tapped into the seething hatred that exists towards the Tories. It marks a stark difference to the endless hand-wringing by Labour over the EU and immigration at the beginning of this year.

The audience was small in what was clearly mainly a press event; yet still the hall was packed with enthusiastic supporters, as well as more or less openly hostile journalists, and of course a good number of campaign staff. The event opened with speeches by local activists from Islington, in what was a thinly veiled defence of Corbyn’s record against his critics in the party and the press, including a response to the nonsense about the supposedly middle-class nature of his constituency.

Such assertions will ring true to many - particularly those suffering under falling wages, worsening insecurity at work, debt and housing shortages (whilst the rich are getting increasingly rich). The Tories were very proud of achieving one or two percentage growth, but most people in Britain both are, and feel, worse off with every year.

Special emphasis was also placed on young people registering to vote, with 2.4 million missing from the electoral roll - many because of changes deliberately introduced by the government to make voting more difficult. Indeed, 50% of students - who have been particularly hard hit by the new rules - support Labour according to a large YouGov poll, and Labour has a distinct lead in under 30s and are tied with the Tories amongst 30-40 year olds. As Corbyn pointed out, “the Conservatives are more than happy” with millions of young people not voting.

The press, true to form, were not the least bit interested in any of the questions raised by his speech or the policies announced. Instead, journalists wanted to know if Corbyn was planning to stand down if he didn’t become Prime Minister, and whether he was relieved that Paul Nuttall was not standing in Middlesbrough.

Dawn Butler MP, who chaired the Q&A, tried to encourage the audience to be polite to the journalists, with some success. Nevertheless, the journalist who asked whether Corbyn would stand down could be heard loudly complaining after the event that they were all being “lumped together”. No wonder when they are so obviously protecting the government and attacking the opposition.

Corbyn correctly explained in his speech why he was constantly being attacked in the press: that is, because of the fact that he is standing up to the elite, as he put it. This is undoubtedly true; Corbyn will never be forgiven for giving people hope of a different society. As the dictatorial President Snow in The Hunger Games puts it, “a lot of hope is dangerous”.

The establishment could handle Corbyn and McDonnell, but they are worried about the hundreds of thousands behind them. Corbyn himself explained how it was absolutely necessary for people to stand up against the elite that “scoffs at anyone that speaks out of line” (to thunderous applause from the audience). He explained how together we will build an alternative to the “rigged system”.

It would be even better still if Corbyn actually called out this system for what it is: the capitalist system. Although there is a more strident tone in recent speeches, it is clear that Corbyn and his team avoids calling things by their true names.

There is an alternative to the capitalist rigged system - and it is socialism. This should be said. As Marxists and socialists, we know what “upgrade” the economy needs: nationalisation of the banks, the utilities, and the large multinational corporations, under workers’ control. But Corbyn, like McDonnell, prefer to talk in vague terms. In fact, the two of them appear to avoid the word “nationalisation” like the plague.

This is a real limitation for the Corbyn programme: how are they to tax the rich when the wealthy can just move their money abroad? How are they to create a £500bn investment bank if the banks refuse to lend any money? Furthermore, how are they to carry out a programme that really attacks the rich and powerful when the majority of the Labour Party’s MPs are mainly interested in defending the power and privileges of the few?

The upcoming Labour manifesto, soon to be released, will undoubtedly generate enthusiasm among Labour Party members, young people and trade unionists. If implemented, it would give some much needed relief from the worst of the cuts and attacks of the past ten years. Even if Labour doesn’t win this election, a bold campaign could serve to strengthen the Left and has the potential to involve even greater numbers in the Labour Party.

Whatever the outcome of the election, the class struggle in Britain is intensifying, both inside and outside the Labour Party.