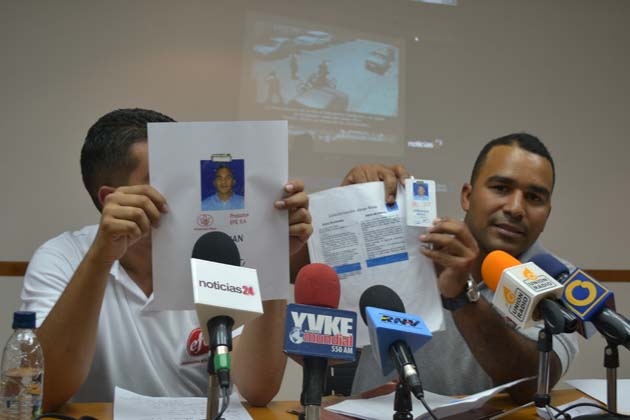 On Monday May 21, there was a foiled attempt against the life of comrade Abraham Rivas. Rivas is General Secretary of the National Union of Workers of Helados EFE (SINATRASOHE) as well as General Secretary of the recently created National Federation of Workers in Food, Beverages and Other Companies (FENACTRALBECA), which organizes workers in 21 different companies belonging to Grupo POLAR. He is also a revolutionary Bolivarian activist and a supporter of the Marxist tendency Lucha de Clases.

An armed individual entered the premises of Helados EFE in Caracas and asked to see Abraham Rivas. He told him, in a threatening way, that he needed to speak to him personally and outside of the company’s premises. Abraham Rivas realized that the man was carrying a gun which he quickly seized from him and, with the help of other union activists present, proceeded to overpower the man, who was later identified as Alexander Zambrano.

The workers took Zambrano to the union offices and questioned him about his motives. By looking through the messages in his mobile phone they found out that another person (later identified as Robert Guedez) was waiting outside the premises on a motorbike.

The workers called the National Bolivarian Guard and with their help both men were arrested and taken into custody. One of them confessed to being in possession of an email sent to him by a third person, containing detailed personal information about Abraham Rivas and his family. This included his full name, those of his wife and children, their phone numbers, national ID card numbers, the age and profession of his wife, their home address, places he visits, as well as the plate number of his car and other details about it. This detailed dossier also included a picture of Abraham Rivas which is the same as that of his company ID card. This was not a copy or a scanned version of his company ID card, but rather a copy of the actual picture which was taken at the time when he started work and the company made the ID card. Only the company Helados EFE has access to that picture. The dossier also referred to Abraham as “leader of the new trade union federation created against Empresas Polar”.

Ever since the 2010 strike of Helados EFE workers, in which Abraham Rivas played a leading role, the union attempted to unite the different union organizations across the POLAR group of companies. The Federation was finally created in March this year. The POLAR group belongs to the Mendoza family and has a monopoly position in the production and distribution of food and beverages in Venezuela.

Despite the amount of evidence against the two individuals who made the attempt on Rivas’ life, and against two other women, who were identified as having commissioned the attack, all were later released without charges. 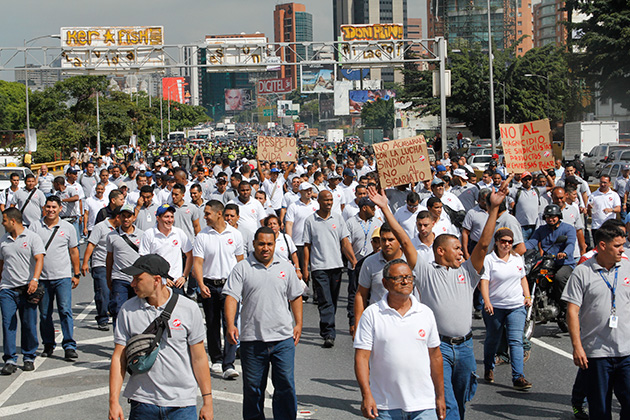 Photo: AM NOTICIAS360The trade union leaders of SINATRASOHE, with the support of a number of other trade union leaders from the federation held a press conference in Caracas on Friday, in which they accused the company of being behind the attack and presented all the proof they had. They stressed that all the evidence points to that the company (Grupo POLAR) is responsible. The security guards allowed Zambrano to enter the premises with a gun, without searching him, in spite of this being normal practice. The dossier which the attackers had received, contained details and pictures of Abraham Rivas which could only have come from the company’s records.

This is a most serious case of intimidation against trade unionists, whose only crime is defending workers’ rights. Had the attack been successful it would not have been the first time that revolutionary Bolivarian trade union leaders were killed in Venezuela by the hired guns of the bosses. We had the case of three leaders of the UNT in Aragua, Gallardo, Hernandez y Requena, killed in November 2008, the case of the secretary of the Toyota workers union in Cumaná Argenis Vazquez, killed in May 2009, and many others. Their killers were never brought to justice.

The impunity and the ease with which the justice system (basically still a bourgeois system) sides with the bosses and denies justice to ordinary workers and peasants, is one of the main threats to the Bolivarian revolution.

We strongly condemn this attack. We express our solidarity with comrade Abraham Rivas and his comrades in the union and the federation. We also demand that the Bolivarian authorities, the leaders of the PSUV, the State Attorney and the Ministry of Peoples’ Power for Labour and Social Security, make sure that this case is investigated thoroughly and that those responsible are brought to justice.

We ask trade union activists, left wing and solidarity organizations, as well as individuals to join this campaign.

We are extremely concerned about the reports of an attempt to kill Abraham Rivas, a trade union leader at Helados EFE and Grupo POLAR, on May 21 this year in Caracas.

We are furthermore extremely worried that despite the fact that four individuals were identified as being involved in the attack and taken to the police, they have all been released without charges.

We ask the relevant authorities to make sure that this case is fully investigated and that those responsible are brought to justice.